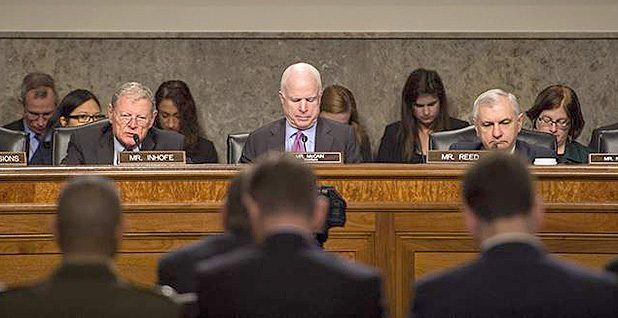 The Arizona Republican’s perch atop the Senate Armed Services Committee is widely expected to be occupied by Sen. Jim Inhofe (R-Okla.), who might be more likely to run for re-election — and more likely to win — if he’s the chairman of that powerful panel.

That means ex-EPA boss Pruitt, who was widely thought to be using his Cabinet-level post as a launch pad for higher office, could face long odds if he’s eyeing a 2020 bid for Inhofe’s Senate seat.

There’s been no official announcement about the Armed Services post since McCain’s death, but Inhofe is all but certain to take the helm as the panel’s second-most-senior Republican. It’s a post Inhofe has long coveted, according to his former aides and colleagues.

"That’s a brass ring to him, and to reach for that brass ring and to be able to grasp it … is something that he’s always wanted," said Frank Keating, former Republican governor of Oklahoma.

Inhofe will turn 84 in November. There’s been speculation he might not run in 2020, when he’s next up for re-election.

But some close to Inhofe and Oklahoma politics don’t see him stepping down — especially if he’s leading the influential panel that oversees the Pentagon.

"I had been hearing that he was very much going to stay, but obviously having the gavel of the Armed Services Committee makes an even stronger case for him to stay on," said Matt Dempsey, a former Inhofe spokesman.

"I think he’s full speed ahead," Dempsey added. "He obviously loves this job."

Of course, Inhofe would keep the gavel only if the Republicans control the chamber, but Democrats face an uphill battle in wresting control away from the GOP in November’s midterm elections.

Pruitt has been keeping a low profile since he left EPA last month after a deluge of bad headlines and ethics allegations.

He was spotted at the Four Seasons hotel in Maui on Saturday, Politico Playbook reported. (Rooms for two adults there run from about $650 per night to $20,000 per night, according to the hotel’s website.)

Pruitt is widely expected to return home to Oklahoma, where his family has a house in Tulsa. It’s unclear what job he might seek or whether his stormy tenure at EPA clouds his political prospects in his home state.

Early in the Trump administration, some suggested Inhofe might be willing to step down in 2020 if he were comfortable with his likely successor. Inhofe even told The New York Times in March 2017 of Pruitt, "I think he’d make a great senator."

"I don’t think Jim Inhofe will ever retire," he said. "Senators get to a certain point where once you get past about age 75 or so, everyone they know is in the Senate." Inhofe has been a senator since 1994 and a member of Congress since 1987.

"John McCain, God rest his soul, was going to keep going until he couldn’t go anymore, and that’s what he did," Gaddie added.

As for the ex-EPA boss’s prospects in Oklahoma, Gaddie said, "There’s a lot more talent and political ambition in this state than is represented by Scott Pruitt."

He noted the up-and-comers vying in Oklahoma’s runoff elections today.

"Both the winners and the losers in those runoffs are potential contenders for the U.S. Senate," Gaddie said. "And they don’t have Scott Pruitt’s baggage."

Keating doesn’t see Pruitt waging a successful primary campaign against Inhofe if he tried to.

"Because of the imbroglio of that departure, it looks like he was asked to leave, and that would be a negative," Keating said of Pruitt’s exit from office. "And Jim is tough as nails."

‘Go back home and start again’

Chad Alexander, former Oklahoma Republican state chairman who now hosts a politics talk show, said Pruitt’s reputation wasn’t hurt as much in the Sooner State as it was elsewhere, but the headlines probably had an impact.

Prior to his tenure at EPA, Pruitt was "considered a choir boy in Oklahoma," Alexander said. "I think with some Republicans, it’s done damage to his reputation."

But should Pruitt return to his home state, "I think he has a base of support among Oklahoma Republicans that still think of him very fondly."

Pruitt could potentially find a job as a consultant or an industry lawyer. Some suspect he’ll set up shop at an Oklahoma law firm.

But one headhunter who recruits for law and lobby firms said of Pruitt’s career prospects, "There doesn’t seem anybody willing to take a chance on having the negative publicity bleed onto them by hiring Pruitt."

Even beyond the stories that implicated Pruitt personally, other recent news of corruption involving President Trump and his close associates might affect Pruitt’s marketability as well.

"The indictments involving Trump’s inner circle certainly don’t help," said the headhunter, who believes Pruitt should leave Washington and return to Oklahoma to find his next job.

"My advice is to go back home and start again," he said.