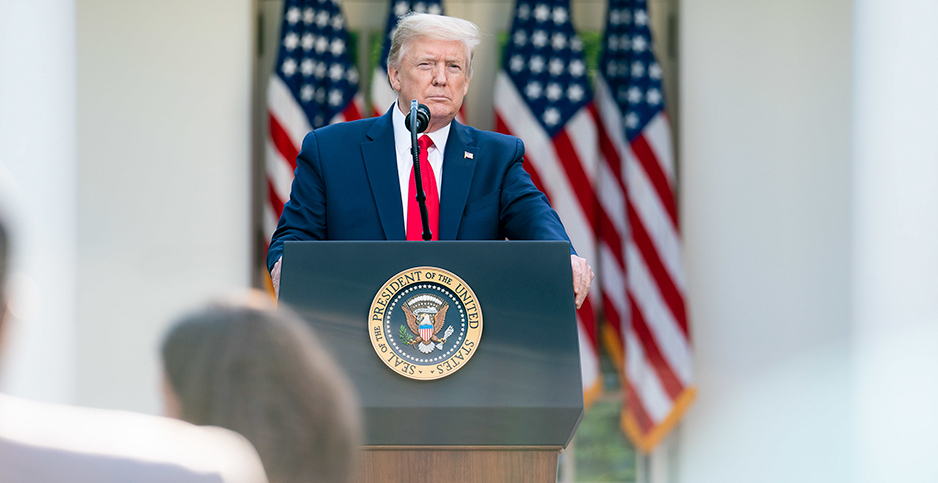 President Trump has required slaughterhouses to remain open during the pandemic by declaring them "essential" to the economy. Tia Dufour/White House/Flickr

President Trump’s decision this week to declare meatpacking plants as critical to U.S. security is more about the industry’s political influence than the need for meat in a pandemic, experts said.

Worse, they added, the executive order issued late Tuesday by the White House puts both workers and the environment at risk. The directive tasks the Agriculture Department with ensuring the continued operation of meat processing facilities affected by the novel coronavirus pandemic, which has temporarily shuttered more than 20 plants nationwide.

"If ever there was an example of how our government favors corporate interests over public health, this is it," said Marion Nestle, a visiting professor of nutritional sciences at Cornell University and the author of the book and blog "Food Politics."

The meat processing and products industry has spent more than $15.1 million on lobbying since the beginning of the Trump administration, according to federal data compiled by the Center for Responsive Politics, a money-in-politics watchdog group.

That investment in influence has helped meat companies and trade associations gain access to Trump and Vice President Mike Pence as the novel coronavirus pandemic spread in meatpacking plants across the country, K Street critics say.

A key provision of the executive order declared that beef, pork and poultry have met the military’s definition for "critical and strategic materials" — a conclusion disputed by public health researchers and environmentalists.

"The meat industry in the U.S. is highly concentrated," said Nestle, "and therefore highly powerful. What’s happening in meatpacking plants is a classic illustration of the downside of monopoly capitalism."

Some 6,500 workers in meatpacking and food processing facilities have tested positive for COVID-19, the respiratory disease caused by the coronavirus, or believe they may have it, according to the United Food and Commercial Workers International Union, the nation’s largest meatpacking union.

It estimates that at least 20 workers have died from the coronavirus and 22 slaughterhouses have closed at some point in the past two months.

During the pandemic, Tyson Foods Inc. — the country’s largest meat processor — has been in regular contact with the White House.

"I just had a phone call with very impressive people," Trump said at a March 15 press briefing. He was referring to a discussion with more than two dozen grocery store and supply chain executives, including Tyson’s chief administrative officer.

"These are great companies," the president said. "We had a long conversation with them."

Tyson told investors in November that it sold more than $42.4 billion worth of meat last fiscal year, an increase of over $2 billion from 2018. But in recent weeks, the company’s stock price has tumbled.

Tyson has spent more than $3.9 million on lobbying since 2017. Meanwhile, at least six people have died in Tyson facilities due to the coronavirus, according to The Washington Post.

"Let me begin by just saying what I said to some of the most prominent CEOs of the meat and grain industry companies in the country — companies like Tyson Foods and Hormel — today. Not just these companies, but to all the hardworking people working in food supply today, thank you," the vice president said on April 7. "Thank you for what you’re doing to keep those grocery store shelves stocked. Thank you for showing up for work every day and working hard to keep that food supply rolling in America."

Seven days later, Tyson’s president was chosen to join one of Trump’s Great American Economic Revival Industry Groups along with five other meat company executives and Zippy Duvall, the head of the American Farm Bureau Federation, a trade group that advocates for farmers and ranchers.

Then, when the president announced his plan to reopen meatpacking plants in the Oval Office on Tuesday afternoon, he told reporters "we’re working with Tyson."

And yesterday, Trump, Pence and Agriculture Secretary Sonny Perdue spoke with Tyson CEO Noel White and other agriculture industry leaders about "the strength and importance of the American food supply," the White House said.

‘A continued supply of protein’

"One of the oldest lines in Washington is, if you’re not at the table, you’re on the menu," said Michael Beckel, the research director for Issue One, a bipartisan group advocating for less money in politics.

"These are companies and trade associations that want to make sure they’re well represented in discussions that are happening in Washington, especially during this public health crisis," Beckel said. "They are leveraging significant resources to make sure their presence is felt."

Now the Trump administration is working to save the meat industry’s bacon.

The executive order said it’s important that meat processors "continue operating and fulfilling orders to ensure a continued supply of protein for Americans." It gave the Agriculture secretary wide latitude to implement the directive.

The closure of a single large plant could result in the loss of more than 10 million individual servings of beef a day and "severely disrupt the supply of protein to an entire grocery store chain," the order warned. "Such closures threaten the continued functioning of the national meat and poultry supply chain, undermining critical infrastructure during the national emergency."

Tyson didn’t respond to questions about its lobbying efforts, environmental impact or the number of its employees who have been sickened or killed by the coronavirus.

But only five of the company’s more than 100 meat processing plants are currently "idle for COVID-19 related reasons," Tyson spokesman Gary Mickelson said.

"The safety of our team members remains our top priority," he said, noting that the company has begun taking workers’ temperatures daily, requiring the use of face masks and implemented social distancing measures in their normally crowded facilities. Tyson is also "conducting additional cleaning and sanitizing," Mickelson said.

Meat is ‘not essential’

"Meat may be useful but is not essential to the human diet," Nestle said. "People in rich countries would be healthier eating less of it and so would the planet."

Environmentalists also have criticized Trump’s order due to concerns about worker safety and the Earth.

"In the midst of a global crisis, the meat industry continues to pack people and animals into factories, fueling the spread of the current pandemic and making the next one more likely," Glenn Hurowitz, the CEO of Mighty Earth, said in a statement.

Big meat companies have "driven the bulldozing and burning of the Amazon and other forests in South America to expand the area dedicated to raising cattle and planting crops to feed them," he said. "In addition to driving mass extinctions and accelerating climate change, this deforestation risks bringing humans into contact with dangerous new diseases."