How mining for clean energy could undermine Biden’s EJ goals 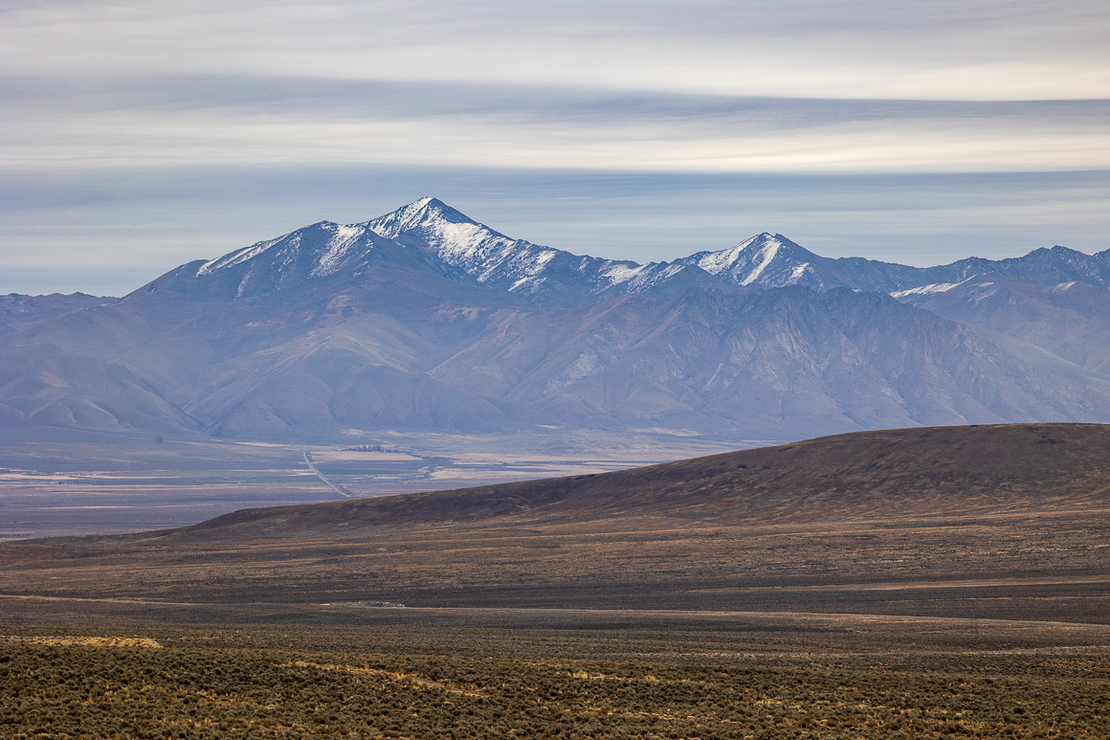 The Santa Rosa Mountains rise above Thacker Pass in Nevada. The area is the site of a proposed lithium mine. Francis Chung/E&E News

The Biden administration has said it is activating all the levers of government to advance environmental justice for people of color. However, one of President Joe Biden’s own policies for climate action might challenge his commitment to racial equity.

Earlier this month, Biden invoked a wartime law to free up federal funds for domestic mining activities for five metals sought by manufacturers of zero-carbon energy products: lithium, cobalt, nickel, graphite and manganese. It was a move that, if successful, could help open mines across the country to support the production of electric vehicles and other technologies that are needed to reduce the country’s use of fossil fuels.

But these zero-carbon products aren’t always clean to Native Americans who live near the mining projects. Finance company MSCI estimates the majority of U.S. reserves for cobalt, lithium and nickel are located within 35 miles of Native American reservations.

Some Indigenous activists are concerned that the Biden administration is encouraging a mining boom that could upend their way of life by degrading sacred sites and potentially threatening groundwater drinking sources.

One proposed mine — Lithium Americas Corp.’s Thacker Pass lithium project in Nevada — could present Biden’s most immediate conflict between the mineral needs of the energy transition and environmental justice. On Friday, Lithium Americas formally applied to the Energy Department for a government-backed loan to finance some of its activities at the mine.

Earl Hatley, a member of the Abenaki Nation of Missisquoi, is one of the Indigenous activists frustrated with the Biden administration.

Hatley recalled watching people he knew suffer from exposure to heavy metals that leached into the soil near Indigenous communities. Hatley grew up in Oklahoma and for more than a decade fought for the cleanup of the Tar Creek Superfund site, a stew of toxic waste created by a legacy of lead and zinc mining.

Now he’s worried that the rush for clean energy-related minerals could have a similar effect as heavy metal mining.

“Joe Biden, you come live here for a year and drink the water and then tell us you want more mining,” said Hatley, who also serves as chair of the Indigenous Caucus for the grassroots activist organization Western Mining Action Network.

As expectations for the deployment of electric vehicles and renewable energy have exploded, so too has the projected demand for minerals to make these products, like lithium, cobalt and nickel. However, in the U.S. these metals are largely located near Indigenous communities, creating a potential conflict between climate action and environmental justice.

Under U.S. law, the government has few requirements to consult with Native American tribes. A United Nations panel found in 2012 that the legal vacuum allows the “conditions of disadvantage [to] persist with the continuing effects of a long history of wrongs and past, misguided policies.”

Environmental and Indigenous advocacy groups called on the Biden administration last fall to propose changes to the existing mining law, which has not been updated since 1872, and regulations that would strengthen community consent rights in the event of a mining boom brought on by efforts to combat climate change.

Activists filed another petition to the White House in November, asking for “generational harm” against Indigenous communities to be considered as a factor during the government’s typical reviews of environmental justice impacts during the permitting process (Greenwire, Nov. 30, 2021).

The Biden administration responded to these concerns by making an interagency working group. According to a Federal Register notice outlining the working group’s mandate, the panel will consider proposals to change U.S. laws and regulations related to mining, as well as identify ways to “increase the timeliness of permitting activities for the exploration and development of domestic critical minerals.”

The earliest the working group could present its ideas to Congress and the public is Nov. 15, according to the Federal Register notice.

Robert Bullard, a member of the White House Environmental Justice Advisory Council, said the administration needs to ensure Indigenous communities are not “sacrificed for the larger society” in pursuit of climate action.

“History has shown us that people of color and Indigenous communities always disproportionately have to bear that sacrifice role. We should not continue that horrific legacy going into 2023,” said Bullard, a professor at Texas Southern University who is often described as the father of the environmental justice movement.

Feeling deserted in the desert

In Nevada alone, there are at least 50 different lithium mining projects in various development stages, according to a tracker maintained by the Center for Biological Diversity.

Thacker Pass is the largest lithium mine proposed in the U.S. and would be situated on lands known by the local Native peoples as “Peehee muh’uh.” It was at this site, according to oral tradition passed down by members of the Shoshone-Paiute Tribes, that federal soldiers massacred at least 31 Paiute people in 1865.

In December, E&E News visited the Fort McDermitt Indian Reservation on the border of Nevada and Oregon. Some residents there are descendants of the Paiute and Shoshone tribes and are opposed to the mine, both for cultural reasons and because they are concerned the lithium brine extraction process proposed for Thacker Pass could affect nearby aquifers.

During the visit, Daranda Hinkey, a Paiute-Shoshone tribal member, said she had come to see “green energy” as a form of “cultural genocide.” Taking stock of how many U.S. lithium reserves overlap with lands close to Native communities, she asked, “Are we in the sacrifice zone?”

Hinkey acknowledged the mine could create jobs and greater civil investments in her community. But those contributions are “so temporary,” she said.

Multiple lawsuits have been filed against the Bureau of Land Management for permitting the mine. Despite these legal challenges, the mine seems to be barreling toward construction.

The Biden administration could potentially give hundreds of millions of dollars to the mining company overseeing the project, Lithium Americas, which on Friday applied to DOE for an interest-free loan under the Advanced Technology Vehicles Manufacturing Loan Program.

At a Congressional Western Caucus event earlier this month, the company’s CEO, Jon Evans, said Lithium Americas expects to begin construction in the second half of the year. Evans also said Jigar Shah, the official overseeing DOE’s Loan Programs Office, informed him that completing the application process for the company’s loan could be as “quick as four months.”

“They are very, very keen to work with us,” Evans said. “We’re asking for hundreds of millions of dollars here, [and] they want to loan it.”

When asked about Evans’ comments, DOE spokesperson Ramzey Smith pointed to a timeline on the department’s website for receiving a loan under the program. It does not specify time frames for any stage of the process. Smith said in an email that “due diligence times vary greatly depending on the project complexity and readiness.”

Lithium Americas spokesman Tim Crowley told E&E News in an emailed statement that the mine was the result of “extensive engagement with surrounding communities — like the Fort McDermitt Paiute Shoshone Tribe.”

Thacker Pass is far from the only location that could create a conflict between resource extraction required for decarbonization and potential impacts to Indigenous people.

Martinez said that environmental justice advocacy organizations, including those fighting for the interests of Indigenous communities, should be assured the White House is doing thorough work and that “fundamental groundwork” is not always visible to the public.

“These are transformative initiatives, and when you do a transformation as opposed to incremental change, obviously there’s some time and foundational work that needs to happen,” Martinez said. “People in the administration are working hard.”

Representatives of U.S. mining and battery industry trade groups said their members believe tribal consultation and engagement should be an important part of any government decision. However, the industry players expressed caution toward giving Indigenous communities any additional authorities they do not already have under current law.

“The devil’s in the details there, but I would be very skeptical,” said Mark Compton, executive director of the American Exploration & Mining Association.

“None of our members are asking for a lower bar on any of that stuff,” said Joe Britton, executive director of the Zero Emission Transportation Association. Britton, who represents U.S. lithium miners and battery manufacturers, said that while “tribal consultation needs to be part of this,” there is already “strong opportunities for tribal input now.”

Conor Bernstein, a spokesperson for the National Mining Association, said in a statement that the trade group “recognizes the importance of respecting the rights, cultures, customs and values of people and communities” that are “affected by companies’ activities,” as well as “the importance of working to obtain the free, prior and informed consent of Indigenous peoples for projects that are likely to have significant impacts” on their lives.

However, activists are not pulling punches when it comes to Biden’s mining policies and its implications for Native communities.

Dallas Goldtooth, a Dakota and Diné organizer for the Indigenous Environmental Network, said he sees the White House response as inadequate. He said his group supports climate policy and renewable energy, but not at the expense of the health and well-being of Indigenous communities.

Goldtooth said many Indigenous communities are concerned that Biden is going “to throw Native communities under the bus as it plows through to increase rare mineral extraction.”

“There are major red flags here,” he said. “If this administration is sincere about confronting climate change, it is not just a matter of stopping fossil fuels, it is a matter of calling into question of how this country operates on an economic level, how it operates in relationship to communities of color, and it really needs to assess if it’s going to continue a process of colonialism with the push into renewables.”

Thea Riofrancos, a political science professor at Providence College who specializes in global resource extraction economies, said the conflict over “mining for clean energy” will be “the conflict that will define the energy transition to come.” She gave the Biden administration low marks for its efforts to assuage the concerns of Native American communities.

“I believe they have good faith, but they want to do the ‘drill, baby, drill’ equivalent. They want to ‘mine, baby, mine,'” Riofrancos said. “It is concerning to rush ahead without better regulations in place.”