How much mining is needed to save the planet? 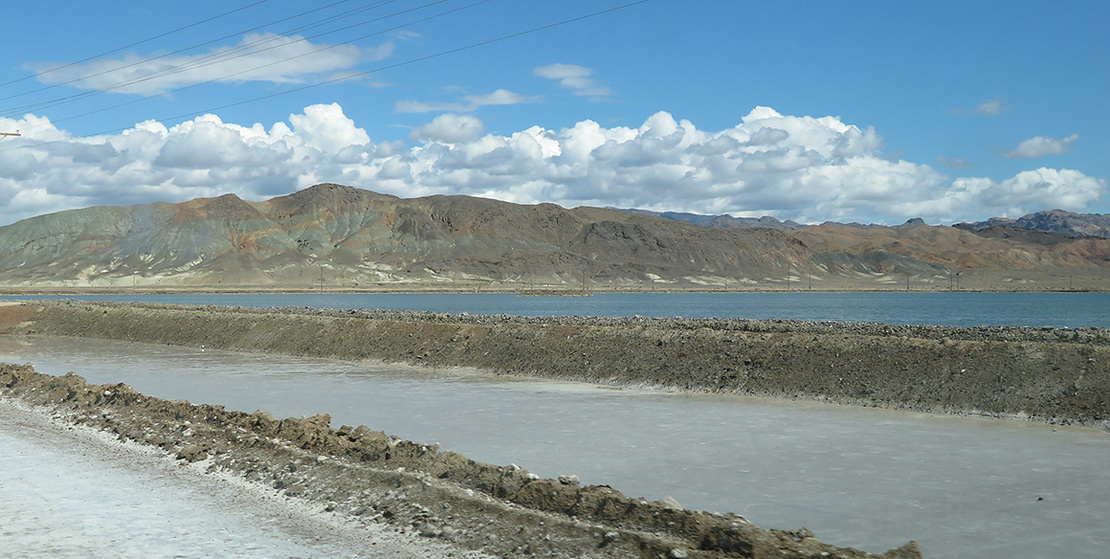 Evaporation ponds at the Silver Peak lithium mine in Nevada. Ken Lund/Flickr

With climate change pushing the U.S. toward more rapid adoption of new technologies, many Republicans and Democrats are in rare agreement on one key point: This country needs a lot more mines.

But exactly how much new mining is required for the energy transition isn’t clear.

Electric cars, wind turbines and solar panels are made with a wide variety of minerals — from graphite to tellurium — that currently are only available in a few corners of the globe. Some of these minerals are not mined enough to feed a world powered without fossil fuels — particularly lithium, a metal vital for electric cars and other battery-reliant products.

For that reason alone, new mines will have to open, experts say.

Still, innovations in tech have already rendered some minerals dispensable — and could eventually make them obsolete. Many new Teslas sold on the market today have batteries without nickel or cobalt, two minerals that until recently were believed essential for green products.

At the same time, nations are racing to create robust recycling systems that can help feed used metal back into manufacturers’ hands, which will reduce — but not eliminate — the new demand for mining.

All of this creates a great deal of uncertainty as the Biden administration and policymakers consider where to allow new mining and weigh just how fast they should push forward, perhaps even streamlining permitting reviews. The risk for the U.S. is opening untouched landscapes and culturally sensitive areas for mines, under the auspices of reducing greenhouse gas emissions, only to create new pollution problems from a sector that by its very nature carries the risk of potential environmental hazards.

“This is really a dilemma,” said Henry Lee, director of the environmental and natural resources program at Harvard University’s Belfer Center for Science and International Affairs. “It’s not like calculating the distance between here and Pluto. These things are going to change.”

The recent passage of the climate-focused Inflation Reduction Act has juiced up the debate, as the need for domestically produced or processed minerals went from an abstract concept to a concrete requirement.

The law tied a $7,500 tax credit for buying an electric car to the origins of a vehicle’s parts. If an American consumer wants to use the full credit, the EV’s battery would need minerals from the United States or a country with a U.S. free trade agreement. The car also can’t include any parts made from minerals mined or processed in China or Russia.

Democrats put this mandate in the tax credit at the request of Sen. Joe Manchin (D-W.Va.), who has long expressed frustration that the United States is so dependent on minerals produced by political adversaries.

Manchin’s language called for a supply chain that does not exist, meaning new mines and mineral processing facilities will have to be built out so EVs get the full tax credit.

Democrats also put other incentives for more mining in the climate law, saying it would help provide the U.S. with independence from China as the country moves away from oil and gas. Any mining operation digging up rocks desired by green tech manufacturers will get a 10 percent tax break. The Pentagon got more than $500 million in added funding to a wartime account that Biden opened for spending on mining activities.

With new U.S. mines come fresh jobs for a blue-collar pool of mine workers who saw unemployment rise due to the shift away from coal power. Getting minerals at home will also mean that green products are less vulnerable to price shocks, like when commodity prices went haywire after Russia’s invasion of Ukraine in February.

Constructing a maze of mines across the nation would have sober trade-offs.

Companies insist that an American mining resurgence would be much cleaner than decades past. But industry progress can’t change the geologic reality that the minerals sought after for making green technologies are located in sensitive parts of the United States, including near delicate ecosystems and Native American communities. In Nevada alone, two large lithium projects have sparked fights over endangered species, water use and Indigenous rights. A broader mining boom could see these conflicts play out on a national scale.

Critics say the environmental concerns about quickly ramping up the mining sector didn’t get enough attention during negotiations on the climate law. Democrats didn’t seem to consider the risks when they boosted the industry, said Billy Fleming, an environmentalist who worked in the White House Domestic Policy Council under former President Barrack Obama.

“It doesn’t really even ask the questions that matter,” Fleming said.

How many mines will we need for the climate? Solving that riddle can seem like a bit of a guessing game.

In September, mining industry data firm Benchmark Mineral Intelligence came up with an answer to how many mines globally need to open for EVs and energy storage batteries to keep growing. After taking a look at the mines producing metals for the battery market today, their estimate was 336 mines by 2035.

“You are going to need mining in this sort of exponential demand phase of the EV revolution,” said Henry Sanderson, executive editor of Benchmark Mineral Intelligence.

But in its own recent analysis, the International Energy Agency noted changing battery designs could result in the world needing fewer new mines.

The IEA concluded roughly 117 lithium, cobalt and nickel mines would have to open to feed the EV market by 2030. Unlike Benchmark, IEA did not analyze how many more mines are needed to produce graphite, a mineral used in battery anodes.

If companies make more batteries without cobalt or nickel, the IEA said that shift would take dozens of projects out of the picture.

“Although we expect some new investment in mining is a requirement, this is not to say we’re focused just on the investment in new mines,” said Tae-Yoon Kim, an IEA energy analyst.

Cobalt, a bluish mineral used in cathodes, has been in high demand because it could protect against batteries overheating. That’s changing because of human rights concerns about cobalt mining in the Democratic Republic of Congo, which has sparked investments in battery research. Now automakers are increasingly swapping cobalt-heavy batteries out for ones that don’t use cobalt or nickel, a metal used in cells to store more energy.

“Technology might improve much faster than we expected,” Kim said.

Companies are still planning to use batteries with nickel and cobalt because they have a higher voltage limit and can store more energy. But they’re planning to use far fewer of them. BloombergNEF, a power research firm, recently cut its projections for cobalt demand by half compared to 2019 levels, citing the progress automakers made on mineral supply issues without new mining.

Kwasi Ampofo, head of metals and mining for BloombergNEF, said the cobalt example shows new mines aren’t the only answer.

“What we’ve learned from cobalt over the last four years is that demand can also respond. Human ingenuity knows no bounds,” he said.

Beyond innovation, recycling can play a role in reducing the need for new mining, especially when it comes to the minerals that are hard to engineer around. According to the IEA, recycling will be “critical” for climate action because demand for green products may rise faster than the pace of production at mine sites.

Recycling is an established part of how metal waste is dealt with in the United States, as well as with chemicals, plastics and paper. But many environmentalists believe this system fails at increasing how much waste the economy reuses and requires a large expansion.

Biden has made money available for minerals-specific recycling projects, including $335 million recently announced by the Energy Department.

Europe has gone even further. The European Union in March proposed rules that would require batteries to have minimum recycled contents and impose material collection targets to ensure a higher number of used products are recycled. Those rules must still be negotiated with E.U. member governments.

But there are limits here too.

Hans Eric Melin, the founder of intelligence firm Circular Energy Storage, makes his living by providing companies and individuals with industry data on the full life cycle of batteries used in electric vehicles and energy grids. He said there simply isn’t enough metal available for recycling to drive the transition away from fossil fuels.

“In terms of recycling, you are only able to recycle what is there,” Melin said.

A big issue is lithium, an element essential for making a battery charge.

In the early 2000s, lithium prices were depressed and mines were closing down. Today the United States is home to only one lithium mine — Silver Peak in Nevada, which is run by Albemarle Corp.

Then came the rise of lithium-powered batteries, used in consumer technology like smartphones and laptops and now electric cars. Experts say lithium demand could skyrocket with growing EV sales, but production is not coming online fast enough.

Global demand for lithium will increase by as much as six times the current level, according to the IEA, which projects around 50 new lithium mines will need to be built to meet that demand.

Like with cobalt and nickel, lithium-free batteries are a potential option. Chinese battery company Contemporary Amperex Technology Co. last year unveiled batteries that used sodium instead of lithium. But engineers are still working out kinks with the overall performance of sodium-based batteries. For now at least, lithium is set to be automakers’ preferred option.

Recycling a way out of the lithium supply issue isn’t viable because there is not enough battery material out in the economy today to feed the rapidly rising demand.

A recent study published in Resources, Conservation & Recycling estimated that by 2035 only 7 percent to 8 percent of U.S. lithium demand could be met with reused materials. More recycling infrastructure will be built in this country and elsewhere over the coming decades, making new mines less necessary in the future, said Alissa Kendall, a professor at University of California, Davis, and one of the researchers behind the study.

However, if the changing climate is to be dealt with swiftly, more lithium mining will have to happen, she said.

Kendall voiced her concern about talking too much about “the impacts of the transition technology” like mining without “coupling it with the comparison to the incumbent” — fossil fuels and the warming emissions they generate.

“We’re doing this because we need to,” she said. “The fear I have is that we scrutinize the electric vehicle supply chain because it’s really important … but we have to couple this with a reminder that the supply chains we’re trying to get rid of have enormous environmental impacts.”