How much should offshore wind cost? Look to Massachusetts 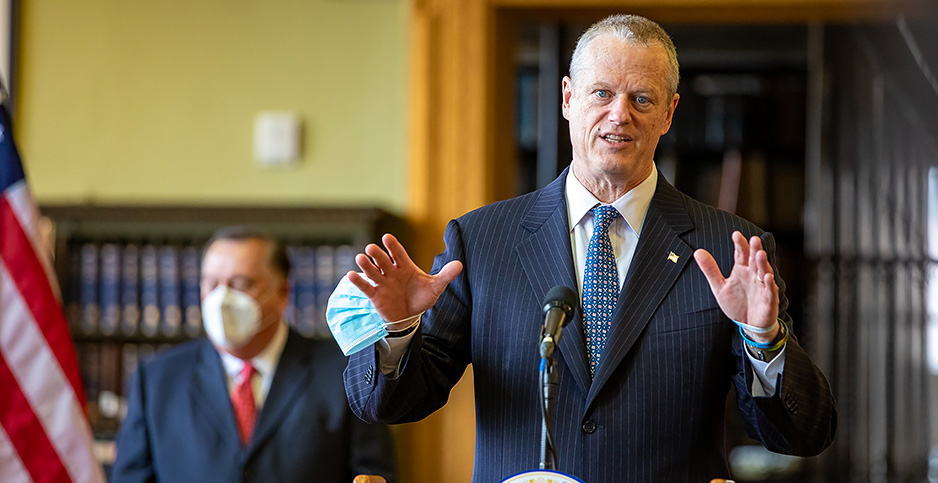 Massachusetts Gov. Charlie Baker, a Republican, says the state is at risk of losing its role as an offshore wind leader unless it removes a cap on the price of new turbine projects. Baker/Flickr

A proposal to revamp Massachusetts’ offshore wind programs is pitting cost-wary Democratic lawmakers against the state’s Republican governor, who wants to make ocean turbines a centerpiece of climate goals.

Gov. Charlie Baker appeared yesterday before a joint energy committee controlled by state Democrats, to promote what he called a "game-changing" bill for Massachusetts’ offshore wind industry. Sponsored by Baker himself, the bill aims to bolster the industry and would eliminate an existing requirement that each new offshore wind project be cheaper than the last.

That condition, which kicks in when utilities and the state select project proposals, was put in place by Massachusetts in 2016, when the cost of offshore wind electricity was largely a matter of guesswork. It was intended to protect the public from untenably expensive contracts.

Now, Baker and the bill’s supporters say the requirement is causing Massachusetts — the first U.S. state to contract for offshore wind — to lose out to neighbors like New York and New Jersey in the ongoing competition for industry investments.

"Without prompt action, and continued growth and evolution, we lose risking our status — and this is something we all talk about — as a leader in this space," said Baker yesterday during his appearance before the Legislature’s Joint Committee on Telecommunications, Utilities and Energy.

Baker’s proposal highlights broader debates about the offshore wind sector, including how laws can affect company behavior and whether the cost of scaling up new technologies is achievable without hurting low-income ratepayers.

The fate of Baker’s proposal also could alter the landscape for offshore wind in other parts of the East Coast, supporters say. If the legislation passes and functions as intended, Massachusetts could win new investments in manufacturing that have increasingly flowed toward New York and New Jersey, which have the nation’s biggest mandates for buying offshore wind power.

The cost of offshore wind is likely to decline as the industry gains size, regardless of state requirements, Baker and other energy officials say. The flexibility to reach slightly more expensive deals would let developers build in creative solutions for transmission and new technologies, like hydrogen and long-duration storage, that could save money or juice progress toward local climate goals, they say.

At least one influential opponent — state Sen. Michael Barrett, a Democratic co-chair of the joint committee — counters that erasing the price requirement would be unnecessarily risky for Massachusetts ratepayers, however.

"Massachusetts consumers are better off with constraints on project prices," Barrett wrote in a Jan. 10 letter to the governor.

The state’s climate goals, which include a 50 percent greenhouse gas emissions cut by 2030 and net-zero emissions by 2050, envision a massive shift from gas cars and building heat appliances toward electric technologies, he wrote, making controls on the price of electricity especially important in coming years.

Other Northeastern states have often agreed to pay far more for offshore wind, ranging up to about double the per-kilowatt rate in Massachusetts, Barrett noted in the letter.

The price requirement had been successful in bringing new jobs and investment to the state, Barrett told the governor during the latter’s appearance before the joint committee yesterday. Baker supported the requirement five years ago, when the economics of offshore wind were far less well-established.

"My hat is doffed to you. … But I can’t believe that you would want to put us where New York is today by lifting the cap altogether, or putting us where, God forbid, New Jersey or Connecticut ratepayers are today," said Barrett.

"We can’t depend on market competition to substitute for a price cap as a protection for Massachusetts consumers," he said.

Known as "An Act to Power Massachusetts’ Clean Energy Economy," the bill’s odds of passage are unclear, although the governor has important allies for his proposal. The state House’s Democratic speaker, Ron Mariano, has backed the plan, along with offshore wind developers and environmental groups like the Sierra Club and Environment Massachusetts.

The bill also includes other features that may attract Democratic legislators, like the launch of a new $750 million fund for innovative clean energy technologies, in part using federal money from last year’s American Rescue Plan stimulus package. Separately, it would shift some decisionmaking power over offshore wind contracts from the utilities toward the state executive branch’s energy authority.

The legislation’s clean energy fund could also open a new path for Massachusetts as it seeks to meet its climate goals, if it works according to the governor’s vision.

Lifting the price requirement, Baker argued yesterday, could free up Massachusetts to settle on deals that pair offshore wind with next-generation technologies that would provide 24/7 sources of clean energy, like hydrogen and long-duration energy storage.

"I’m one of these people who really does believe that if we actually figure out storage and turn offshore wind and solar into a hard, completely reliable and dependable [solution] … strategically, it changes kind of everything with respect to the way we think about some of this stuff," said Baker.

Such "firm" resources would mark a change from current energy transition plans in Massachusetts, which has counted on Canadian hydropower as a round-the-clock substitute for oil and gas. But neighboring states have repeatedly rejected the huge transmission lines that would transport the hydropower into Massachusetts.

"The power of innovation, in this space, may be much bigger than we realize," said Baker.

The debate also shone a light on the recent consolidation of the offshore wind sector, a phenomenon that could shape clean energy goals in unforeseen ways.

In 2018, for instance, 11 developers submitted formal bids to the Interior Department for three federal lease areas off the coast of Massachusetts.

In 2021, just two offshore wind project proposals were submitted to Massachusetts, which was awarding the rights to produce the power. In the end, both competitors won project rights.

Two major developers, Ørsted and Equinor, decided to sit out the state solicitation. In a statement to E&E News, spokespeople for Ørsted and its utility partner, Eversource, attributed their absence to the price requirement, saying it "impacted our ability to accomplish" objectives like investing in the local supply chain. "We look forward to future reforms that will help us achieve these goals," the companies wrote.

During the governor’s appearance before the Massachusetts committee, however, Barrett noted that only a slightly larger handful of developers were leading offshore wind investments in Northeastern states.

"Unfortunately, at the moment, with or without a price cap, the entire upper East Coast has attracted very few players, and that’s a sobering thing to think about," Barrett told the governor.

One version of a compromise, Barrett suggested, might involve removing transmission solutions from the price requirements, rather than abandoning the latter entirely.

"I ask you if there is grounds here for compromise," he said. "Can we find our way to some measured outcome here, rather than rolling the dice, as New York, New Jersey and Connecticut have done?"