How much would the Democrats’ climate bill cost? 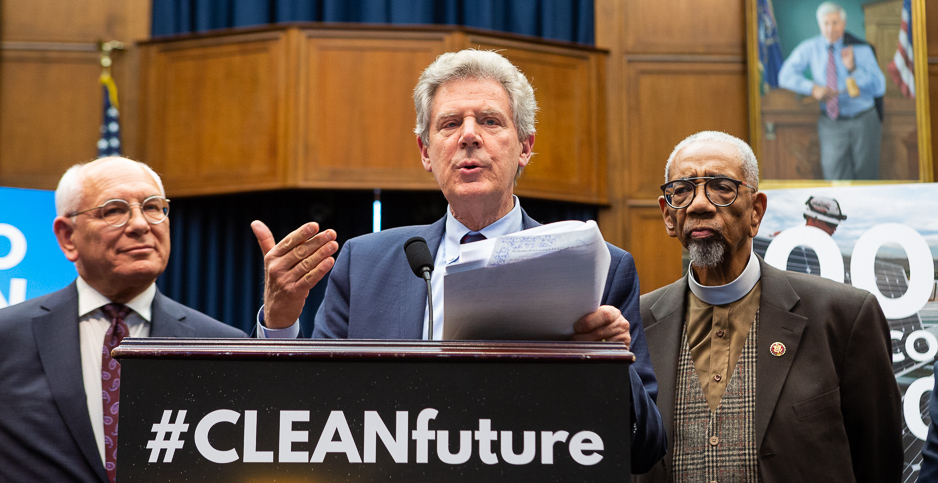 In total, the measure would authorize approximately $316 billion over a decade’s time in order to help the country reach net-zero emissions by 2050, according to an E&E News accounting.

The spending would come through new programs within the Department of Energy and EPA, along with a host of reauthorizations and expansion of existing programs at those agencies.

The accounting represents an attempt to capture the direct dollar figure authorizations included in the draft bill language.

However, spending impacts are hard to figure out for significant portions of the draft bill because of the flexibility some provisions would give agencies and appropriators.

"Our draft CLEAN Future Act focuses on both the policies and the investments that must be made," said Pallone’s statement.

The measure remains a discussion draft after Democrats unveiled it late last month. Spending totals could change — in either direction — as the committee seeks input.

Rep. Paul Tonko (D-N.Y.), chairman of the Environment and Climate Change Subcommittee, said in a statement that the bill was intentionally released as a draft text to further the discussion on the nation’s ultimate climate goals, with an eye toward fine-tuning language to achieve the correct policies.

"We are ready to work with any and all interested parties to determine appropriate authorization levels, but just as importantly, we need to make sure we have well-designed policies upon which to guide that funding," Tonko said.

The draft text does offer an idea of the committee’s intentions and policy goals in its efforts to address the climate crisis and where federal investment could help achieve that effort.

The legislation looks to set spending levels for electric vehicle-related infrastructure grants, rebate programs and retrofit programs at just over $75 billion over the 10-year period.

That level of spending would reflect a massive government-led effort to overhaul the transportation sector, which leads the country in emission totals.

The measure includes a massive expansion of existing programs established as part of the 2007 energy bill — the last major update to the nation’s energy policies.

Both of those areas would rely heavily on a grant program that would send money to states and local communities to conduct the projects.

One of the draft bill’s single highest totals over the 10 years is a reauthorization of the Low-Income Home Energy Assistance Program (LIHEAP) at its current authorization level of $5.4 billion annually.

Despite that existing level, Congress has yet to reach that in actual spending, with the most recent fiscal 2020 bill providing $3.75 billion for LIHEAP.

That appropriator uncertainty adds another level of doubt about the spending levels contained within the bill, and a leading Democratic appropriator already hinted it will not be so easy to ramp up spending at the pace envisioned in the bill.

"I think we could get more momentum, but I think there is also a reality in budgeting and being sensible about how you ramp up a program so it can be successful," Rep. Marcy Kaptur (D-Ohio), chairwoman of the Energy-Water Development Appropriations Subcommittee, told E&E News earlier this month about whether her spending bill could match the ambitions of the draft text.

"We will gladly take a look at what they have drafted and would receive them before our committee very soon as part of the hearing process," she added. "But I am excited about it. We are the committee that produces real results, and I hope what they will call a ‘Green Real Deal,’ so we want to walk in tandem with them."

The bill also has large sums dedicated to areas outside of greenhouse gas emission reductions. That includes $49.4 billion for drinking water state revolving fund money and $5 billion for state grants related to per- and polyfluoroalkyl substances contamination, among other areas.

Several provisions of the draft bill leave out an explicit dollar figure.

A new commercialization program for carbon capture and storage (CCUS) would be eligible for roughly $2.3 billion annually through fiscal 2024. But for fiscal 2025 through fiscal 2030, the program would be authorized for "such sums as may be necessary."

The bill would also direct the creation of a host of advisory committees and reports on new programs and spending. A dollar figure is not yet attached.

And in many areas, the proposed topline authorization is not an effective metric for what the bill would achieve.

The "CLEAN Future Act" provides plenty of regulatory guidelines, including a requirement to maintain the Obama-era methane rule for the oil and gas industry, as well as new emission standards for cars and light-duty trucks.

Similarly, its primary policy for eliminating emissions in the power sector — a clean electricity standard — comes with no specific funding authorization.

The CES title would impose a system of clean energy credit trading on retail electricity providers, administered through DOE, ramping up to a requirement for 100% clean energy by 2050.

The requirement would generate revenue via alternative compliance fees for companies that cannot meet targets and civil penalties in certain cases, but it would not help offset the overall cost of the bill.

That money would instead be directed entirely to states through a new carbon mitigation program aimed at improving energy efficiency and decarbonizing government vehicle fleets.

While the Department of Energy would be tasked with setting up the trading market, consumers would help shoulder at least some of the cost for retail suppliers selling more clean energy.

But effects on retail electricity prices would be modest overall, according to an analysis of the design from Resources for the Future, which provided input on the legislation.

Supporters of the policy argue it’s a way to decarbonize power at a low cost to ratepayers, compared with an explicit economywide price on carbon.

"With a clean electricity standard, any increase in costs to electricity suppliers is negligible — it’s not going to be a huge increase in cost to retail electricity consumers," said Lindsey Walter, a senior policy adviser at Third Way. "And it will likely be less than you would see under a comparable carbon price."

Those type of government costs have been central to Republican opposition to a more wholesale government intervention to reduce carbon emissions.

"Our focus is on innovation," said Walden. "There is a lot of money out there today in the whole federal system, and maybe we can better target what’s there and really focus on these research projects going on."

The four bills focused on advancing and deploying more CCUS technology, including a permanent extension and expansion of a tax credit to benefit companies that capture and store carbon, known as 45Q.

In total, those GOP bills would authorize $885 million in new funding and trust fund deposits over the next five fiscal years for CCUS research and a trillion-trees planting initiative, according to an E&E News accounting.

Compared with what the federal government is already spending to respond to the increasing threat of climate change seen in wildfires and hurricanes, the spending levels attached to the Republican or Democratic measures pale in comparison.

A Government Accountability Office report in 2017 found that extreme weather from that year cost over $300 billion in economic costs, due in part to the intensity of extreme weather events.

Those type of costs, Pallone said, are part of the committee’s thinking into how it plans to eventually set its funding authorization levels.

"Anyone who says you can address the climate crisis without major federal investments is not living in reality, and any conversation about costs must include the enormous price we’re already paying for climate change every time a wildfire, hurricane or tornado tears apart a community," said Pallone.

"Until those costs are part of the conversation, we aren’t having an honest one," Pallone’s statement concluded.