How N.H. elevated climate in the race for president 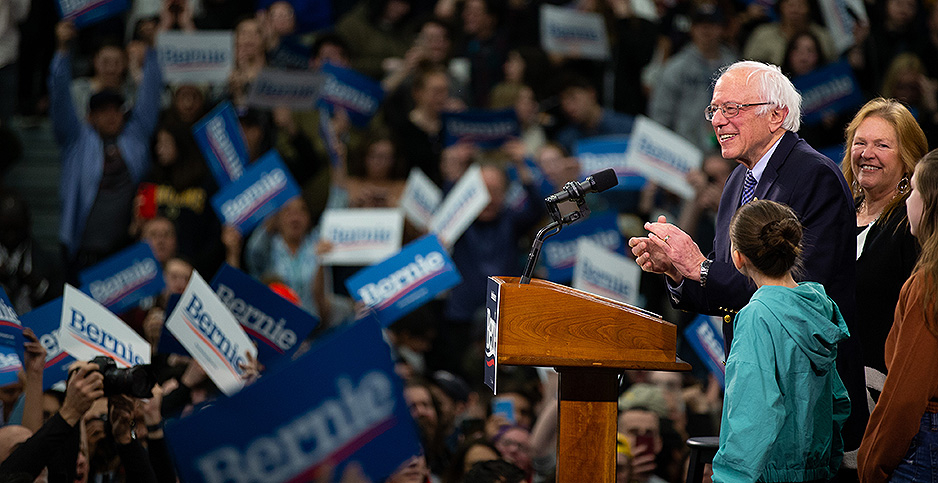 New Hampshire voters raised the chances that a climate-focused candidate will be nominated by Democrats to challenge President Trump in November.

Vermont Sen. Bernie Sanders narrowly won the state’s presidential primary last night, consolidating the progressive vote around his vision for an expansive Green New Deal. Moderates did the opposite, splitting their votes among several candidates who are promising to compete through Super Tuesday. Looming over those divided moderates is billionaire Michael Bloomberg, the former Republican whose Democratic credentials rest on his anti-coal activism. He’ll be on the ballot starting March 3.

Sanders eked out a win with 25.7% of the vote, followed closely by Pete Buttigieg, the former mayor of South Bend, Ind., who trailed Sanders by just 3,600 votes for 24.4%.

With such a close margin, Sanders credited his victory to volunteer groups like the Sunrise Movement, the youth climate organization that said it had secured 12,000 pledges to vote for Sanders. Chanting interrupted Sanders’ victory speech when he promised to assail the fossil fuel industry, as the crowd roared "Green New Deal! Green New Deal!" It was his only policy to get such a reaction.

Another good sign for Sanders: Voter turnout surpassed 2016 levels and appeared on track to top 2008, the high-water mark for voter enthusiasm in a Democratic primary. Sanders’ strategy relies on boosting turnout among young and unlikely voters.

"This is not some fluke," said Alexandra Rojas, executive director of Justice Democrats, which backs candidates who support a Green New Deal.

"It is because of years of hard work and a movement that was led by, again, one of the most diverse coalitions of young people America has seen," she said on CNN after the network declared Sanders the winner.

Climate change was a top issue on voters’ minds yesterday. One-third of Democratic voters — or 33% — said it was the most important issue, according to a poll by the Associated Press. It came in second only to health care, which was described as a top concern by 35% of voters.

Last night’s surprise third-place finisher was Minnesota Sen. Amy Klobuchar at 19.8%. She and Buttigieg overcame long odds by concentrating their ads and manpower in the mostly white states of Iowa and New Hampshire. Analysts predict they could have trouble recreating those conditions in Nevada or South Carolina, where they’ll have a short window to expand their support among black and Latino voters.

"The best news for Sanders could be that the second and third place finishers… are uniquely ill-equipped to parlay their strong NH showings into SC & Super Tuesday contests," David Wasserman of The Cook Political Report wrote on Twitter.

Friday’s debate gave Klobuchar a shot of momentum, as exit polls showed her making steep gains among late-deciding voters. While her attacks on Buttigieg likely made the most impact, she also portrayed herself as identical to President Obama on climate.

Her promises centered on the Clean Power Plan, restoring auto emission standards and returning to the Paris climate agreement — all totems of the Obama administration — as well as a carbon price. She steered clear of her more contentious climate positions; she didn’t mention co-sponsoring the Green New Deal resolution, nor did she repeat her support for natural gas. Each of those stances could come under scrutiny as Klobuchar becomes a growing threat to other candidates.

Massachusetts Sen. Elizabeth Warren and former Vice President Joe Biden finished far behind the leaders and won’t win any New Hampshire delegates — a stark turnaround for the two candidates who spent the summer as front-runners. Both emphasized that they have the staff and infrastructure to continue campaigning through Super Tuesday, the March 3 contest involving 16 states and territories.

Warren has subtly softened the progressive plans she rolled out over the summer, which had made her popular with climate activists. Unity was the emphasis of Warren’s speech last night rather than policy.

Biden traveled to South Carolina before polls closed last night. The state’s primary on Feb. 29 has become all-important to his wounded candidacy, which began with the promise of forging a coalition of African American voters and working-class whites. Biden’s climate plan was designed to nurture that coalition by maintaining fracking — a significant source of Rust Belt union jobs — while emphasizing justice for overpolluted and climate-vulnerable communities of color.

The white half of that coalition hasn’t materialized in early-voting states, leaving Biden with zero primary victories after three presidential campaigns and nearly 50 years in national politics. He’s banking on a turnaround in Nevada’s primary on Feb. 22 to shore up his minority support, which has ebbed in recent polling.

The coming days will show whether New Hampshire gives Sanders the momentum he missed from Iowa, where his popular-vote victory was overshadowed by technical problems and Buttigieg’s strong performance.

Sanders’ momentum will take shape in the coming days. Some commentators pointed to how much he undershot his 60% New Hampshire finish in 2016, suggesting his support has waned. Others argued the opposite: He beat one candidate last time, and this time, he beat more than a half-dozen, including a former vice president and another neighboring-state senator with similiarly progressive bona fides.

New Hampshire was especially suited for Democrats to pitch their climate plans, said Rob Werner, the New Hampshire state director of the League of Conservation Voters. There is no energy industry to placate, while the entire state has felt climate impacts. Warmer winters are squeezing the state’s maple syrup and winter sports sectors, while moose and fish struggle to cope with new stressors.

Businessman Andrew Yang dropped out after finishing in the single digits. Yang’s signature issue — a universal basic income of $1,000 per month for everyone — animated his climate policy, which lived on his website under the title "It’s worse than you think — lower emissions, higher ground." He said a universal basic income would help people move themselves out of risky areas.

Perhaps the biggest surprise of the primary came hours before polls closed, when the tiny New Hampshire precinct of Dixville Notch cast the first votes of the primary just after midnight yesterday morning. The winner wasn’t on the ballot — it was Bloomberg, who won a write-in victory on both the Democratic side (two votes) and the Republican side (one vote) in the tiny town.

The billionaire, one climate-minded voter explained to reporters, had called him personally.

Material from the Associated Press was used in this story.