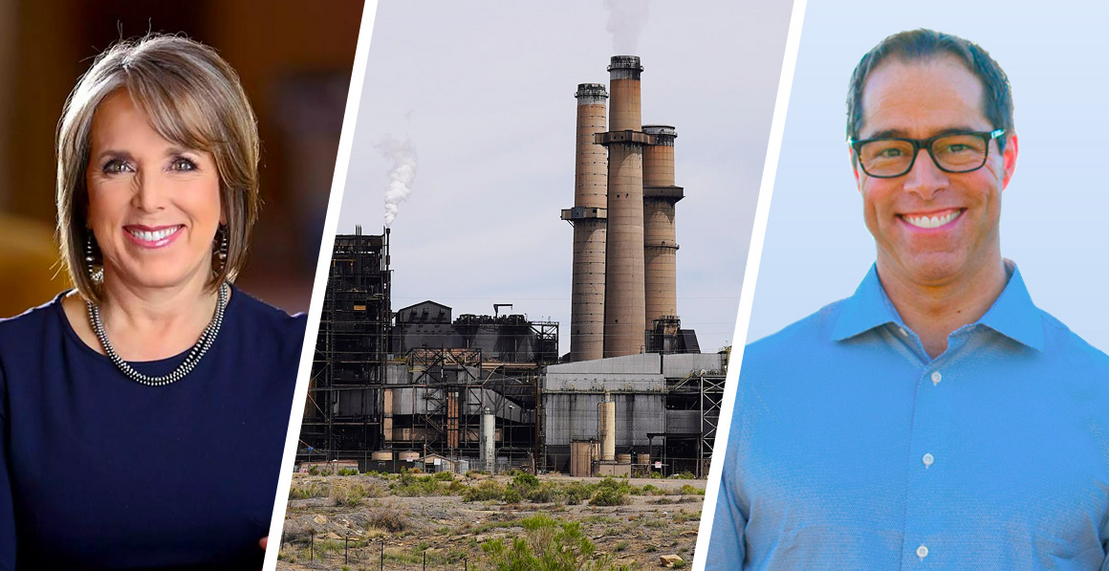 Three years ago, New Mexico became a climate leader with the passage of an ambitious law requiring the state to get all of its power from zero-carbon resources by 2045. In the years since, the state’s share of wind and solar has increased, while coal generation has declined, culminating in the closure this summer of one of the state’s largest plants.

Whether the state continues that trajectory will in large part depend on the outcome of today’s tight gubernatorial race.

Gov. Michelle Lujan Grisham (D) is running for reelection against Republican Mark Ronchetti, a former meteorologist. While energy hasn’t been a major factor in the race — an Albuquerque Journal poll found that the economy and public education were the top issues for voters — the two candidates have shown marked differences in their plans to address climate change and encourage low-carbon energy.

Gabe Pacyniak, primary faculty supervisor of the natural resources and environmental law clinic at the University of New Mexico, said the governor’s executive authority grants plenty of power over energy issues, including either strengthening or slow-walking the Energy Transition Act, passed in 2019. Pacyniak pointed to actions taken under former Gov. Susana Martinez (R), who did not act on some environmental rules from her predecessor, Democrat Bill Richardson.

“Lujan Grisham very early on put in place an ambitious climate executive order, and a lot of her actions have come through executive authority,” Pacyniak said. “Even with measures that have passed the Legislature, enforcement and setting standards comes with some discretion from the Environment Department and boards that are appointed by the governor. So this race matters a lot.”

Lujan Grisham has touted her energy work in her reelection bid, noting that the state was first in the country in clean energy job growth last year, according to a report from clean energy advocacy group E2.

“As one of the governor’s first acts in office, she signed landmark energy legislation setting bold statewide renewable energy standards and establishing a pathway for a low-carbon energy transition, the Energy Transition Act,” said Lujan Grisham spokesperson Delaney Corcoran. “Throughout her time in office, she has championed an all-of-the-above approach to energy and climate — making New Mexico a national leader on wind and solar energy, while producing the cleanest crude oil in the world due to methane emission regulations implemented by the governor.”

“In her second term, the governor will continue to champion policies that diversify New Mexico’s economy, expand the renewable energy sector, and add good-paying jobs around the state for hardworking New Mexicans,” Corcoran added.

Ronchetti has warned about the state’s move to what he called a “California energy policy” that could lead to higher electricity rates and reliability concerns. On Twitter in September, Ronchetti linked to a story about concerns that electricity demand may outpace supply, saying it was a “direct result of actions by” Lujan Grisham. “This will result in higher costs, crush working families and will lead to blackouts by next year,” he wrote. “This governor must be held accountable.”

A 2022 report partially funded by the state’s largest utility, Public Service Co. of New Mexico (PNM), found that there is a “significant and urgent need” for new resources to meet electricity demand in the Southwest, although the state did not experience any significant blackouts this summer.

Ronchetti’s campaign did not respond to requests for comment.

RealClearPolitics rates the race as a toss-up, with an average of polls showing Lujan Grisham with a lead of 4 percentage points as of Monday.

The fight over San Juan

The debate over the Energy Transition Act has been on display in the 46,000-person city of Farmington in the state’s northwest corner. At the end of September, the 5-decade-old coal-fired San Juan Generating Station powered down in line with the carbon-free electricity generation goals of the law.

PNM, the plant’s largest owner, is now working on decommissioning the site and plans to replace its generation with solar power. But supply chain issues have delayed the replacements, and the plant’s planned retirement was extended for three months this summer over reliability concerns. State Sen. William Sharer (R), who represents the Farmington area in San Juan County, told E&E News that has created more uncertainty in his district.

“Not a single shovel of dirt has been turned on anything new,” Sharer said. “So the replacement power, the replacement jobs, none of that is happening. Of course people are upset. There was no need to close the power plant, and now it looks like PNM lied to us and to the state of New Mexico.”

The Energy Transition Act required the state to get half its electricity from renewable sources by 2030, and to get electricity only from zero-carbon resources by 2045. It also set aside $40 million for coal workers and community development projects for communities affected by plant closures (Climatewire, Jan. 3, 2020).

Sharer said he does see promise in a planned carbon capture project backed by the city of Farmington and startup Enchant Energy Corp. The partners would restart the remaining two units of the plant with technology it claims could capture up to 95 percent of the carbon dioxide released from the plant, with plans to store it underground in the San Juan Basin (Energywire, Sept. 8).

Executing that project depends on Farmington — which owned 5 percent of the plant — taking full ownership in order to transfer it to Enchant. An arbitration board will hear Farmington’s case to take over the plant, while other owners led by PNM say they are continuing with decommissioning plans.

In late October, the state’s Environmental Improvement Board adopted rules mandated under the Energy Transition Act that would limit CO2 emissions from coal-fired power plants under the state, regulations that would come into play if the Enchant project moves forward. Although the project will run with carbon capture equipment, its initial startup could make the plant subject to the emissions caps.

Lujan Grisham’s administration has not taken a public stance on the Enchant project, but also has not stepped in to help it advance and applauded the plant’s closure in a statement at the time. Sharer said the next governor could issue a waiver to help the plant avoid some regulations and to advance the project, something he said Ronchetti has promised to do. “If he loses, there’s no opportunity to keep it alive, so next week, we’ll know if there’s still life for San Juan,” Sharer said.

However, he added, the impacts of the plant’s closure and the overall move to clean energy could still ripple out across the state.

“The whole idea that we can close power plants and then add more electronics to our houses and buy electric cars doesn’t make any sense to me, “ Sharer said. “Outside of San Juan County, I don’t think people are thinking about this, but they will when their electricity rates go up.”

Is a climate bill on tap?

Environmentalists say they are hopeful that if Lujan Grisham is reelected, the Energy Transition Act will pave the way for a larger, more comprehensive climate bill that touches on economic sectors outside of electricity generation. In the last session, Democrats introduced — but did not pass — the “Clean Future Act,” which would have set limits on greenhouse gas pollution from all sources in the state, with a target of net-zero emissions by 2050.

State Rep. Nathan Small, a sponsor of that bill, said New Mexicans “have more at risk from the climate-driven crisis … and frankly, more to gain from the response.” Although he said he didn’t want to get ahead of the next session’s agenda, he said Democrats will continue to work on climate change and water issues, including finding ways to harness federal resources from the Inflation Reduction Act.

Under Lujan Grisham, the state enacted the nation’s strongest laws on methane emissions from the oil and gas sector, while also expanding the industry to become the nation’s second-largest producer. She has been a vocal advocate for the state’s becoming a hub for clean hydrogen power.

Sammi Kao, a climate and energy advocate for Conservation Voters New Mexico, said her group is hopeful that if the governor is reelected, there could be further executive action to cut down on oil and gas pollution alongside comprehensive climate legislation.

“The Energy Transition Act is law, it’s codified, and now we want a bill to address all industries and sectors,” Kao said. “And if [Lujan Grisham] doesn’t win, then it’s all about playing defense and making sure we can continue the work we’ve done.”

The energy sector, however, has given significantly more money to state Republicans. According to OpenSecrets data, Ronchetti has collected more than $880,000 from energy and natural resources donors in the campaign, including donations from New Mexico oil and gas firms Brewer Oil Co., Piper Energy and Harvard Petroleum Co. Lujan Grisham has received nearly $668,000 from the same sector, including donations from alternative energy producers NextEra Energy and oil companies like Marathon Oil.

Ronchetti is pledging to give all New Mexicans $100 for every $1 billion the state receives in oil and gas revenue each year, saying on his website that the plan would plug a “black hole of the state government budget.”

Joe Vigil, spokesperson for the New Mexico Oil & Gas Association, said the industry looks forward to “working together with the next governor on regulatory items that help increase supply while being good stewards of the environment.” While the group has not endorsed a candidate, Vigil added that more environmental regulations could disrupt the industry’s growth.

“New Mexico’s industry takes great pride in using technology, innovation, and expertise in producing cleaner energy for our citizens,” Vigil said. “Our producers work diligently to constantly exceed the standards set for them, but excessive regulation discourages investment and hampers the ability to meet our nation’s energy demands.”

Regardless of the outcome of the race, Lujan Grisham will have a powerful opportunity to influence the state’s future electricity mix in the next two months.

A constitutional amendment passed in 2020 converted the state’s Public Regulation Commission from an elected body to an appointed three-member commission. The governor will choose three new members before January for staggered terms of two, four and six years from a list of five nominations prepared by a bipartisan committee. That board will then be in charge of approving utilities’ clean energy plans and compliance with state targets.

The University of New Mexico’s Pacyniak said that under Lujan Grisham, New Mexico “became a leader in climate action,” work that he expects to continue even if Ronchetti wins. Although the governor’s personnel decisions and legislative priorities would hold a lot of sway in enactment, Pacyniak said it is unlikely that the Energy Transition Act’s goals would be reversed entirely.

“The science of climate change and its impacts are more clear now than they were in the last election,” Pacyniak said. “As we saw on the federal level under [former President Donald] Trump, attempts to roll back pollution laws can be very challenging when the science is clear. A governor who tries to roll back our laws, I think, would face some difficulty.”