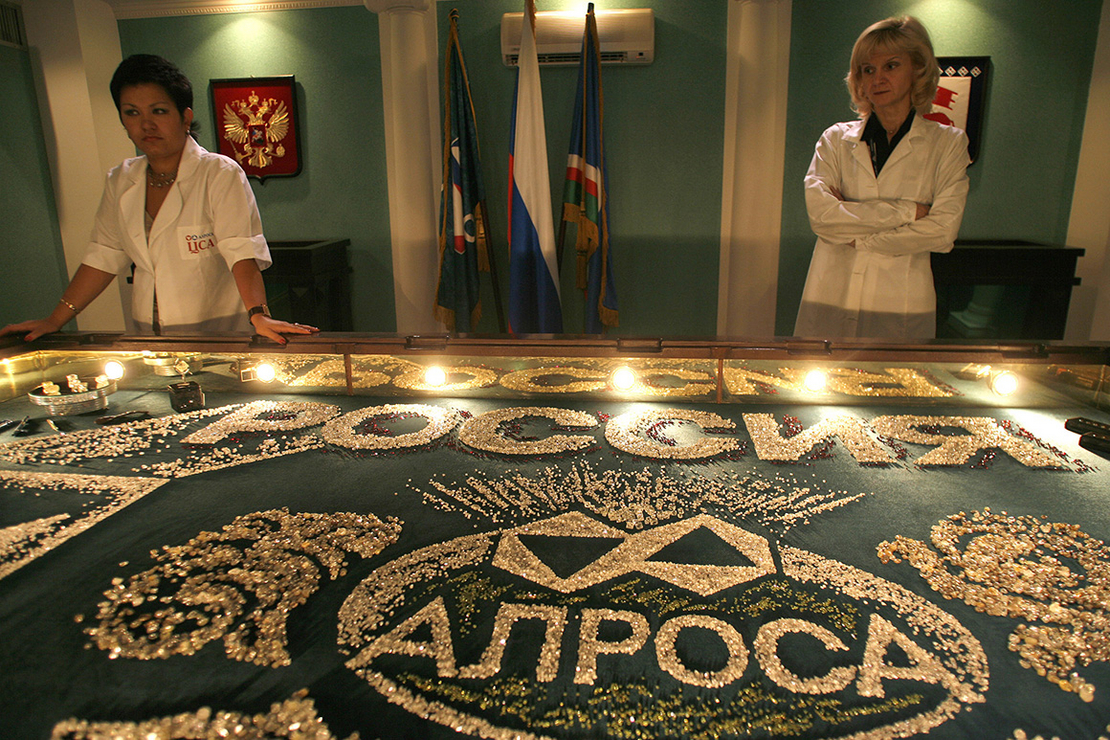 Employees of the Russia-backed diamond company Alrosa at a stand with diamonds at the company's diamond selection center in the town of Mirny, Russia, in 2006. Mikhail Metzel/AP Photo

But even with sanctions imposed after Russia’s invasion of Ukraine, diamonds from Russia are certainly for sale in jewelry stores across this country — and likely will be for some time.

That’s true even though almost all of the diamonds mined in Russia are from state-backed Alrosa PJSC, the largest diamond miner in the world. The Russian Federation owns one-third of the company, once leading President Vladimir Putin to tout the “serious revenues to the federal budget” provided by the industry.

“We cannot ignore that Russia accounts for a significant portion of global rough diamond production and that these proceeds help finance the government’s operations, presumably including its military,” said Nicholas Hill, the deputy U.S. representative to the Economic and Social Council, at a March 18 event at the United Nations. ECOSOC is an organ of the United Nations focused on economic and social issues.

Industry experts, however, say those sanctions carry a significant loophole. In many cases, it is still legal to sell diamonds that originated in Russia in the United States, including diamonds mined by Alrosa. The key is that Russia’s rough diamonds make a stopover in another country — usually India — where they are polished and cut, essentially making them now the product of that country. As another complication, diamonds of various origins at that stage are often mixed together, which can make it more difficult for companies that independently vow to stop buying Russian goods.

One of the biggest U.S. jewelry outfits, Akron, Ohio-based Signet Jewelers, the owner of Zales and Kay Jewelers, this week said the company would boycott diamonds mined in Russia, pledging to find other sources.

“As soon as this conflict started, we immediately stopped directly sourcing any diamonds or gemstones from Russia, and we asked our vendors to do the same,” Signet Jewelers CEO Gina Drosos told Bloomberg TV on March 21.

But Cristina Villegas, mines to markets director for the human rights nonprofit Pact, said that is not universally happening. “Loads of mainstream jewelers have Alrosa diamonds on their shelves,” she said.

“It’s one of the few sectors where it’s business as usual,” Merket said.

Alrosa did not respond to a request for comment.

Experts say the loophole allowing Russia’s diamonds into the United States exists because of the winding and opaque nature of the global diamond trade.

When a miner like Alrosa sells its diamonds, they are typically “rough” — unprocessed and uncut. Those diamonds are illegal for Alrosa to import into the United States under current sanctions.

But rough diamonds are usually transported to India, either directly or via trading hubs located in cities around the world. Once those diamonds are cut and polished in a second country, they are considered by the U.S. government to be “substantially transformed,” and are considered a product of that country.

Villegas said she is “worried that without the tightening” of existing sanctions, Russian diamonds “will continue to fund the war in Ukraine directly and indirectly.”

“Obviously, for consumers who want no part of this war, this is outrageous,” she said.

Diamonds entering the United States normally would be trusted to be conflict-free because of a global standards-setting organization called the Kimberley Process. The supply chain tracking initiative was created in response to the “blood diamond” concerns of the late 1990s and early 2000s. At the time, Western economies wanted to stop diamond purchases fueling rebel groups attempting to overthrow governments in African nations.

The Kimberley Process was created to stop diamonds linked to conflict while they are their unpolished and uncut state.

The organization, however, might not be up to handling a massive producer like Alrosa, which supplied more than 30 million carats to the world market in 2021.

Brad Brooks-Rubin, who worked for the U.S. representative for the Kimberley Process during the Obama administration, emphasized the significance of the fact that once diamonds are cut and polished, they are no longer monitored under the process’s certification system.

“The idea of the Kimberley Process was we’re going to control anything going in the pipeline and we’re going to put a ring around the manufacturing side, and as long as everything going into the manufacturing is clean, then everything’s clean,” Brooks-Rubin said. “[But] the thing people are worried about isn’t the thing the Kimberley Process is designed to stop.”

Asked whether Russian diamonds are still being imported into the United States, a spokesperson for U.S. Customs and Border Protection said E&E News should contact the Kimberley Process. The office of the chair of the Kimberly Process did not respond to a request for comment. The nation of Botswana currently chairs the program.

Jewelers of America, a trade group representing family jewelers across the United States, issued guidance in February after the sanctions went into effect urging “extreme caution when purchasing diamonds and diamond jewelry from suppliers outside the U.S.” due to “the clear nature of the sanctions targeting goods emanating from Russia.”

However, the association noted that products of Russian origin on U.S. shelves that were purchased prior to Feb. 24, the day sanctions went into effect, are “not affected by any existing sanctions.” The trade group did not respond to multiple requests for comment.

The rough diamond loophole led the Jewelers Vigilance Committee, an industry watchdog sponsored by major luxury brands like Rolex and Chanel, to urge companies to use “extreme caution” importing any diamonds, noting that the rules may change in the future.

But experts say the loophole is unlikely to be fixed anytime soon, as that would require a coordinated clampdown on the international stage and large amounts of spending to set up minerals tracking systems.

And India, where most diamonds are polished and cut before traveling to sale for consumers, has opted against any restrictions on importing Russian diamonds. Shipments of Russian diamonds mined by Alrosa into India resumed last week, according to India’s Economic Times.

In addition, Russia’s diamonds traveling from the trading hubs to India carry the risk of being mixed in bags carrying diamonds from other sources. Merket of IPIS told E&E News that blending in transit makes it “very difficult to track the trail a diamond follows from mine to market.”

Over the years, Alrosa has partnered with major U.S. brands and has been heralded by industry trade groups as a leader in responsible mining practices.

The Russian miner remains certified as a sustainable diamond company by the Responsible Jewellery Council, an industry-led standards initiative, although Alrosa stepped down from the group’s board of directors after the invasion of Ukraine.

Alrosa’s profits ballooned in the months leading up to the war thanks to higher consumer demand from following Covid-19 lockdowns — meaning its diamonds will continue to work their way through the global market. Avi Krawitz, a senior analyst for diamond industry consultancy Rapaport Group, told an industry webinar in mid-March that Alrosa last sold diamonds to customers on the day Russia invaded Ukraine.

Aside from Signet, some significant luxury brands have for the moment shut down operations in Russia.

LVMH, the product group that includes brands Louis Vuitton and Gucci, announced it would stop operating in Russia.

But it appears some intermediary diamond traders could still be working with Alrosa.

Although Alrosa deleted its public customer list as war broke out in Ukraine, an archived version of the list available online shows that the company had several long-term contracts with traders in Belgium and India at the start of the year.

Two of the Belgian firms on the archived list, diamond wholesalers Dali Diamond and Pluczenik, continue to promote partnerships with Alrosa on their websites. Unlike the United States, the European Union hasn’t banned Russian diamond imports. Neither firm responded to a request for comment.

Merket said diamond traders could continue to work with Alrosa because “if you’re not in the industry, you don’t know these names,” allowing them to “operate outside public sight.”