How Scott Pruitt rode a wave of federalism to power 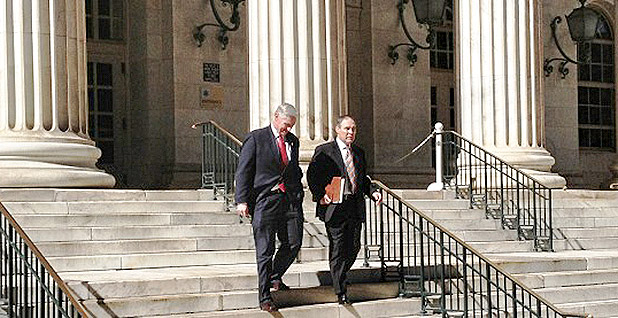 Scott Pruitt was in the right place at the right time in 2011, just as the Obama administration was preparing to unleash a torrent of new environmental regulations.

As a state senator in oil-and-gas-rich Oklahoma, Pruitt unsuccessfully ran for higher office twice before launching a bid for attorney general. Then, in 2010, he latched onto a winning conservative campaign issue: massive government overreach. Voters liked what they heard.

Soon after entering office, he established a federalism unit to push states’ rights and closed a section of the office that focused on environmental cases. Over the next six years, that unit helped launch Pruitt as a leader among Republican attorneys general as he battled alongside big businesses against Obama’s use of executive power.

"He cares passionately about the rule of law," said West Virginia Attorney General Patrick Morrisey (R), who has worked with Pruitt on multiple cases, including against U.S. EPA’s Clean Power Plan. "All the actions he’s been involved in are rooted in the firm belief that what the administration was doing was unlawful."

Now Pruitt is poised to become the next administrator of EPA, the same agency he spent years trying to hamstring. Colleagues say it was his time fighting federal regulations in particular that helped position Pruitt to be selected for the job.

Democrats have slammed him as a pay-to-play politician who puts industry interests ahead of people and the environment. But interviews with conservatives who have worked alongside Pruitt paint a picture of a legal scholar obsessed with adhering to the strictest interpretations of federal law and leaving the rest up to states.

As attorney general, Pruitt sued against federal laws on health care and financial reform and executive action on immigration. But his specialty has been in challenges to energy and environment regulations. In all, Pruitt has sued EPA 14 times to block environmental standards, according to EDF Action, the advocacy partner of the Environmental Defense Fund.

Andy Miller, the former Democratic attorney general of Virginia who later represented energy companies like coal-heavy utility Southern Co., recalled a meeting in 2013 among attorneys general and industry interests in Oklahoma, which The New York Times has chronicled.

"The issue of the day was discussed in a way that allowed Attorney General Pruitt, to his credit, to emerge as one of the leaders, if not the leader with respect to energy issues among the attorneys general," Miller said.

Drew Edmondson, a Democrat who served as attorney general before Pruitt, called Pruitt’s focus on federalism and industry-friendly cases "a total switch from how the office had operated before."

"I had concentrated in my 16 years as attorney general on things that directly benefited the state of Oklahoma, which included consumer protection, violence against women, protection of the environment, things of that nature," Edmondson said.

Edmondson said he doesn’t recall ever suing the federal government, even when Republicans controlled the White House.

Pruitt has focused much of his work on fighting federal policies that he said would harm Oklahomans. Critics note that those same policies happened to also enrage energy companies, which joined his lawsuits and in some instances assisted for free while also contributing heavily to his campaign funds.

Other Republican attorneys general took a similar approach, capitalizing on voter discontent with the Obama administration’s executive actions at the same time as the conservative tea party movement grew to prominence. At least a handful of states instituted federalism units, although Oklahoma’s was one of the earliest.

But Paul Nolette, a political science professor at Marquette University and expert on federalism, said Pruitt was more aggressive and signed onto riskier arguments that others wouldn’t try out.

"I would definitely consider him at the forefront of conservative activist attorneys general," said Nolette, calling him a "policy entrepreneur."

Democratic senators and hearing confirmation testimony from Pruitt today, however, will tell a starkly different story. Environmental advocates charge that Pruitt worked hand in hand with corporations in lawsuits against environmental protections in order to benefit the oil and gas industry in Oklahoma.

"Federalism or conservatism has really become a code for what’s good for the oil and gas industry," said Ben Schreiber, a senior political strategist for Friends of the Earth, one of 170 green groups calling on the Senate to vote down Pruitt’s nomination.

Fighting ‘one size fits none’ regs

Democrats today are likely to demand that Pruitt answer for his view that climate science isn’t settled and his connections with the fossil fuel industry, both of which environmentalists say should disqualify him (Climatewire, Dec. 8, 2016).

The New York Times in 2014 found that energy firms were in a "secretive alliance" with Republican attorneys general. The report found that Pruitt lobbied federal agencies to ease estimates of air pollution, passing on letters written by Oklahoma oil and gas company Devon Energy Corp. as his own.

Some of Pruitt’s supporters have acknowledged to E&E News on the condition of anonymity that the incident with the letter didn’t look good, but they maintain that he was still pursuing what he thought was best for Oklahomans. They also note that environmental groups contribute to Democratic attorneys general.

Pruitt also previously chaired the Republican Attorneys General Association (RAGA), a group that formed in the 1990s to focus on federalism issues and help get other conservatives elected. He is now a director for the organization. RAGA’s nonprofit fundraising arm, which doesn’t have to disclose donors, helped raise the number of Republican attorneys general to 29. Although disclosures aren’t available, Freedom Partners, a group tied to the Koch brothers, listed a $175,000 grant to the fund on its 2014 tax form (E&E Daily, Jan. 9).

Many of Pruitt’s fellow Republican attorneys general ran on similar federalism platforms that were popular both with voters and industry.

Chrissy Harbin, director of federal affairs for the conservative group Americans for Prosperity, said the movement was a backlash against Obama administration "one size fits none" executive action, including mercury rules for coal plants, which the Supreme Court found flawed after most of the industry had complied.

"Given that kind of landscape, I think it’s really no surprise that there was unrest among attorneys general," Harbin said.

She said any accusation that Pruitt and other attorneys general only pursued cases because of industry influence "really distracts from the fact that regular folks have been hurting from the burdens and rules." Harbin’s group maintains that most of the Obama administration’s major regulations hurt the economy more than they help the environment.

Former Virginia Attorney General Ken Cuccinelli (R) described Pruitt as businesslike, methodical and a leader "even among AGs, which is why you’ve seen him lead on so many lawsuits."

Cuccinelli also noted that he helped initiate an effort to coordinate among attorneys general and called Pruitt "a great leader in that effort, without the need to take the lead on his own."

"It might be healthy to have a skeptic of an agency running it. Government does tend to grow, and regulations just keep going. I get all that," Whitman said. "What troubles me is that I see a denigration of the mission. The idea that the agency can do no good. That’s just wrong."

In addition to Pruitt’s attacks on federal regulations that he views as illegal, his work within the state suggests he may not pursue basic environmental protections, advocates say.

Pruitt left unresolved a lawsuit against poultry producers that claimed the companies were dumping "hundreds of thousands of tons" of chicken waste into the Illinois River watershed (Climatewire, Jan. 3; Energywire, Jan. 18). Pruitt also opposed the plans of an Oklahoma utility to work with EPA on a transition away from coal (Climatewire, Jan. 17).

Morrisey insists, though, that Pruitt wants to "reinforce the core mission of EPA."

"He is not going to make decisions on the basis of his past relationships or his past perspectives with respect to policy issues," Morrisey said. "He wants to enforce the law the way it’s written."