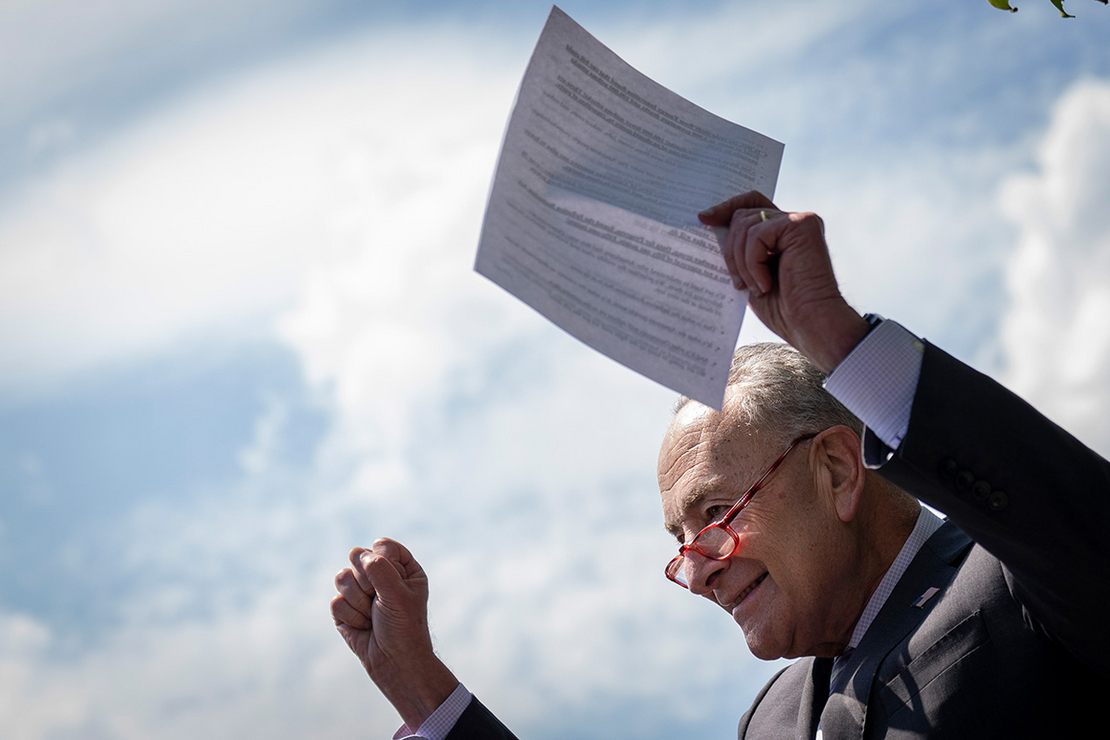 The climate package that passed the Senate over the weekend was decades in the making.

From the collapse of the Clinton administration’s energy tax proposal in 1994 to the Senate’s rejection of the Kyoto Protocol 25 years ago, lawmakers have failed time and again to take broad action on climate change.

Top of mind for some Senate Democrats is the Waxman-Markey carbon cap-and-trade bill, which cleared the House but fell apart in the Senate and divided the party ahead of a disastrous 2010 midterm season.

“All of the work that’s gone into this is not just this bill,” Sen. Brian Schatz (D-Hawaii) said in an interview. “It’s Ed Markey, it’s Henry Waxman, it’s Al Gore, it’s the environmental movement from the original Earth Day.”

Democrats have spent the 12 years since the failure of the cap-and-trade legislation developing a political coalition for climate action — and a set of policies that could keep their caucus together.

They ended up with a $379 billion suite of incentives and grant programs, tied to billions in other social spending and tax policies. That includes long-term tax credits for wind and solar and massive boosts for technologies like nuclear, hydrogen and carbon capture.

Unlike past climate bills, the “Inflation Reduction Act” contains few punitive measures that would punish greenhouse gas emissions from fossil fuels, whether by tax or regulation. The exception is the bill’s methane fee, paired with more than $1 billion in subsidies for oil and gas.

“I think it really represents multiple decades’ worth of work,” Sen. Martin Heinrich (D-N.M.) said in an interview.

“This is a priority caucus in a way that has never been true in the past,” Heinrich added. “And then you have individual members who have expertise in different pieces and parts of this, and so it is to some degree an organic composite of all of those pieces of leadership.”

While climate change is still less politically salient than traditional kitchen table issues like health care and inflation, environmental groups have succeeded in drawing unprecedented attention to it.

By the 2020 election, climate change was for the first time a top-line campaign issue for a presidential candidate. President Joe Biden ran on a promise to address it, and it was a topic at debates, a novel concept for environmental groups that had long tried to inject the issue into the popular conversation.

“This, for those of us who fought in this area for a long time, is a huge momentum builder after a long period of doldrums,” Sen. Sheldon Whitehouse (D-R.I.) said during a recent news conference.

To be sure, there are some energy policies in the bill that many Democrats don’t like.

There’s also brewing concern that the bill’s electric vehicle tax credit could slow the transition away from gas-powered cars because, at Manchin’s behest, it’s dependent on building out supply chains for battery minerals that do not yet exist (E&E Daily, Aug. 8).

But given the history, most in the party are happy to take what they can get. Analysts expect that the bill would cut greenhouse gas emissions by some 40 percent by 2030, a huge chunk of Biden’s commitment under the Paris Agreement.

“This is an excellent climate bill that we made with Joe Manchin,” Schatz said. “If anyone expected that there wasn’t going to be something from Joe Manchin in it, then they were never serious about enacting a bill.”

A history of failures

Lawmakers have been told for more than 30 years that fossil fuel emissions are warming the planet. It came to popular attention on Capitol Hill in 1988, with the testimony of climate scientist James Hansen before a Senate committee.

“It is time to stop waffling so much and say that the evidence is pretty strong that the greenhouse effect is here,” Hansen said at the time.

Since then, lawmakers have tried to tackle the issue in fits and starts.

President Bill Clinton proposed an energy tax based on the heat content of different fuels, sold primarily as a way to reduce pollution and bring in federal revenue. When it failed, House Democrats who had voted for it suffered in the 1994 midterms.

Despite congressional inaction and efforts by the fossil fuel industry to dismiss it, climate change politics for a time remained relatively bipartisan.

By then, Republican opposition to climate policy — and climate science — had begun to harden. But when Democrats took the House that year, Rep. Nancy Pelosi (D-Calif.), then in her first term as speaker, made climate a top priority.

The result was the cap-and-trade bill drawn up by then-Reps. Henry Waxman (D-Calif.) and Ed Markey (D-Mass.).

It passed the House, but 44 Democrats voted against it, and it eventually died before ever getting a Senate vote.

Like the Clinton energy tax, it was blamed for Democratic losses in the midterms.

In the years since cap and trade, the politics of climate change have shifted dramatically, but they have remained a difficult hurdle.

The energy sector has undergone a transition away from coal, toward natural gas and renewables, giving more political clout to the clean energy industry, which operates widely in GOP states.

Republicans, for the most part, no longer deny the science of climate change, though they oppose most wide-ranging efforts to reduce emissions, arguing that natural gas and other fossil fuels are part of the solution.

Congress, meanwhile, has chipped away at emissions in piecemeal fashion, including through a 2020 energy bill that included an array of innovation funding and a provision to phase down a superpolluting class of greenhouse gases known as hydrofluorocarbons.

“I remember sitting down with Sheldon Whitehouse and Martin Heinrich several years ago. We were out of power, and Sheldon correctly observed that what we are trying to do is popular, and yet we keep getting beat,” Schatz said. “And so our enterprise was to build a winning coalition, not just a winning message or winning bill.”

“Our enterprise was to build a winning coalition, not just a winning message or winning bill.”

When the Georgia Senate elections were called for Democrats in December of 2020, giving them the narrowest of Senate majorities, it became clear that they had a real chance at broad climate legislation.

Because they would have to go through budget reconciliation to avoid the Senate filibuster and pass a bill with just 50 votes, the legislation could not be regulatory. Democrats effectively chose to give up on trying to garner Republican votes for climate policy and also to tie it to a much larger package of social policies containing virtually their entire legislative agenda.

Markey, for his part, credits young voters for rallying behind the issue and pushing Congress to act.

“Republicans blocked Waxman-Markey back in 2010, and, yes, I would want more in this bill,” Markey, who now represents Massachusetts in the Senate, said on Capitol Hill last week. “But this bill has what we need on climate change.”

It didn’t come easily. Negotiations were rocky from the very beginning when lawmakers last year began the reconciliation process that ultimately became the “Inflation Reduction Act.”

Progressives wanted a climate and social spending bill worth $6 trillion. When talks began in earnest, the top line had fallen to $3.5 trillion.

Over the course of last fall, Manchin — the Energy and Natural Resources chair — chipped away at many of the original proposal’s climate policies, drawing the ire of environmental groups.

Originally, Democrats had wanted to include a $150 billion Clean Electricity Performance Program — essentially a clean energy standard designed to fit the narrow budget rules that govern reconciliation — but Manchin nixed the idea.

Manchin also demanded changes to the methane fee. The negotiated version passed by the Senate would offer roughly $1.5 billion in grants to the oil and gas industry before imposing a price on excess methane emissions, a handout that left a bad taste in progressives’ mouths (E&E Daily, Dec. 10, 2021).

Then, in December, Manchin rejected the House-passed “Build Back Better Act,” sending negotiators back to the drawing board. He eventually restarted talks with Schumer, with less input from the White House.

Manchin never directly opposed the bill’s suite of clean energy tax credits, which account for the bulk of its projected emissions cuts.

Senate Finance Chair Ron Wyden (D-Ore.), the architect of those incentives, said he’s been working on it with Manchin for 10 years, beginning with a trip to West Virginia at Manchin’s invitation when Wyden was chair of Energy and Natural Resources.

“We are going where the Congress has never been before — $260 billion for clean energy tax credits that reward reducing carbon emissions,” Wyden told reporters recently. “We’ve been working on that for a full decade since Sen. Manchin invited me to West Virginia.”

Despite the inclusion of pro-fossil-fuel provisions in the final bill — and a blowup between Manchin and Schumer that nearly sank talks last month — many of the original climate policies from the “Build Back Better Act” remain in place.

Manchin became the bill’s most enthusiastic salesman after he struck the deal with Schumer last month. In a weekend alone, he appeared on at least four different Sunday shows to pitch the legislation.

“For years, I have worked across the aisle to determine the most effective way to increase domestic energy production, lower energy and healthcare costs, and pay down our national debt without raising costs for working Americans,” Manchin said in a statement after Senate passage Sunday. “The ‘Inflation Reduction Act’ is the product of that work.”

Schatz credited Manchin for finding a way to an agreement on climate policy and forcing Democrats to “refine” the message.

“He’s out there selling it, and I think it’s great. It’s no small thing to have to have Joe Manchin out there saying that we need to take action on this climate package,” Schatz said. “It’s almost Nixon going to China.”

The Senate was the biggest hurdle, but the “Inflation Reduction Act” still has to pass the House this week.

Key House moderates have gotten in line behind the bill despite past quibbling about the tax provisions, though some have not committed to voting for it.

The House Rules Committee plans to meet on the bill tomorrow to send it to the floor, with a vote expected by the end of the week.

Also on the schedule for next month is a separate permitting reform bill Manchin asked for in exchange for his vote on reconciliation.

Republicans, meanwhile, are hoping to use the climate legislation against Democrats in the midterms. With prices at the pump still high, they have labeled the clean energy provisions a “gas tax.”

Democrats have broadly stuck together on the climate aspects of the bill through fights about its health care and tax policy.

Compared to 12 years ago, “people understand how it all fits together,” said Senate Agriculture, Nutrition and Forestry Chair Debbie Stabenow (D-Mich.).

“Do I want to do more? Would I support more? Absolutely,” Stabenow told reporters. “But this is the most significant thing we have done to address the climate crisis ever.”

In the midterms, Democrats will be running on the bill’s prescription drug price controls more than on its climate policy, Schatz said. But in general, the bill offers a huge slate of selling points, he added.

“I think that we will be able to look voters in the eye and say we’ve had one of the most productive Congresses in at least a decade,” Schatz said.