How the $1.7T omnibus affects energy, from CCS to hydrogen 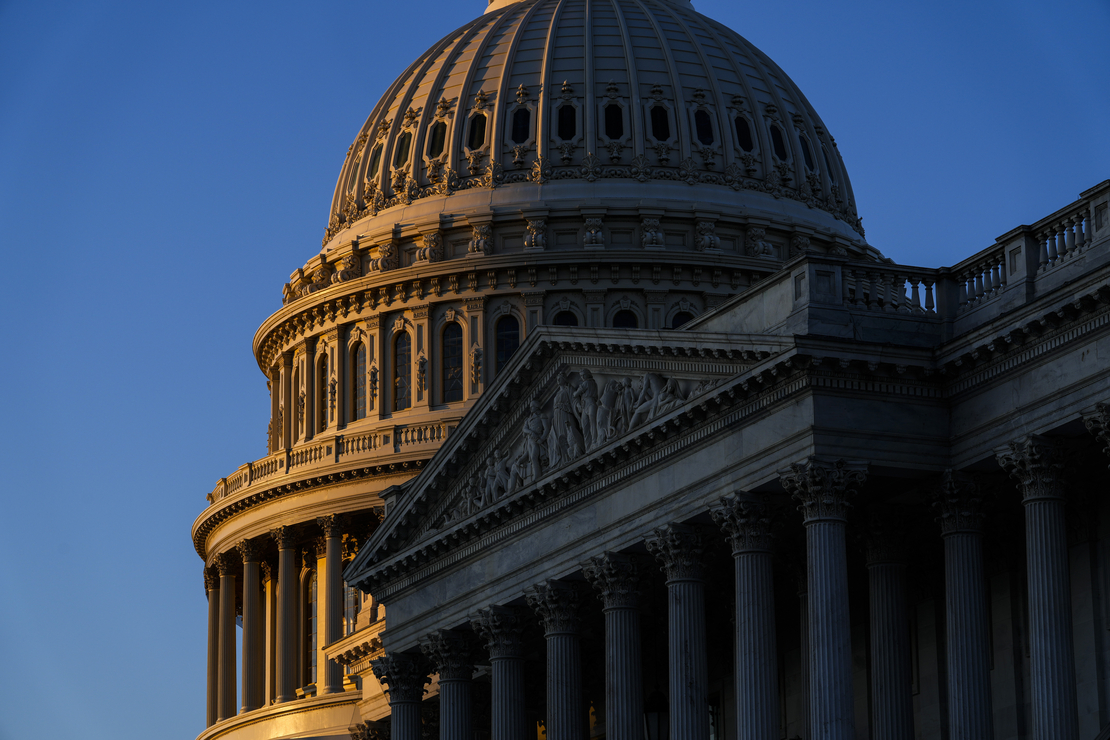 The year-end spending package released by Congress on Tuesday could deliver an influx of funding to several Department of Energy programs that may be pivotal for hitting the Biden administration’s climate targets.

The omnibus bill — which would fund the government at $1.7 trillion for fiscal 2023 — would provide $46.5 billion to DOE to “fund programs in its primary mission areas of science, energy, environment, and national security,” Senate appropriators said in an explanatory statement on the package. That’s an increase of roughly $1.7 billion from fiscal 2022 for the department.

The funds would support the department’s efforts to scale carbon capture and removal technologies, advance technologies aimed at boosting the resilience of the U.S. electricity system and reduce emissions from heavy industry like steel and concrete, among other initiatives.

The bipartisan legislation could receive a final vote later this week before lawmakers adjourn for the year. It represents the last opportunity for Congress to dole out funds to energy-focused agencies prior to Republicans’ taking over the House in January.

Under the plan, DOE’s Office of Fossil Energy and Carbon Management would receive $890 million, a $65 million increase from fiscal 2022. The agency’s Office of Energy Efficiency and Renewable Energy would get $3.5 billion, a $260 million uptick from last year (E&E Daily, Dec. 20).

The Office of Electricity, which oversees policy for resilience and security of regional electric grids, would also get a boost. It would receive $350 million, a $73 million bump from last year. About $95 million of that pot would go toward energy storage technologies.

In addition to money for DOE, the package would expand funding for the Federal Energy Regulatory Commission, an independent agency with oversight of electric power markets and natural gas pipelines. FERC would get $508.4 million, up from $466.4 million in fiscal 2022.

Here are three ways the spending bill would affect energy:

The omnibus would provide $140 million for research, development and demonstration of carbon dioxide removal technologies across multiple offices — with DOE’s fossil office set to receive “not less than” half of that funding, according to the report from Senate appropriators.

Additionally, the bill calls for the creation of a pilot procurement program for the purchase of CO2 that’s been removed from either the atmosphere or the upper hydrosphere.

“Procurement of carbon removal services would be something that the government has never done before, but they are the biggest purchaser of goods and services in the world, so they have the capacity to contribute to a vision like that,” said Danny Broberg, a senior policy analyst for the energy program at the Bipartisan Policy Center, a think tank.

Broberg said the funds would give DOE the flexibility to pull from existing authorizations to craft “a carbon removal procurement program.”

In addition to carbon removal, the omnibus encourages DOE to prioritize funding for carbon capture projects and research that “look to reduce the cost of these technologies for commercial deployment.”

The legislation also dedicated funding for front-end engineering and design studies, “including for the development of a first-of-its-kind carbon capture project at an existing natural gas combined cycle plant, large pilot projects, and demonstration projects,” the Senate report said.

Multiple proposals, including projects in Texas and West Virginia, are competing to be the first large-scale natural gas-fired power plant in the United States equipped with carbon capture technology (Energywire, Nov. 8).

Some groups, however, dismissed proposed spending on carbon capture.

“It’s infuriating that the federal government is doubling down on the high-risk, proven loser that is carbon capture and storage,” Maggie Coulter, an attorney at the Center for Biological Diversity’s Climate Law Institute, said in a statement Tuesday.

Along with funding for carbon capture, the spending bill would support research into developing scalable approaches for using carbon dioxide produced in biorefineries and other plans to produce “higher value fuels, chemicals, or materials.”

Outside of DOE, the omnibus would provide $5 million to EPA for continued work on its program related to Class VI wells, which are used to inject CO2 deep into underground formations for dedicated geologic storage.

EPA is also being called on to brief Congress about permitting and public engagement around Class VI wells, the Senate report said.

“This report language, along with new funding to support education and training for Class VI program staff, will be critical to ensure adequate permitting capacity at both the federal and state level that is necessary for economywide deployment of carbon management projects at the pace and scale required to meet both net-zero emissions and midcentury climate goals,” Madelyn Morrison, government affairs manager of the Carbon Capture Coalition, said in a statement Tuesday.

Transmission and the power grid

The proposed funding for FERC comes as the agency is weighing two rules that could promote development of long-distance transmission lines and speed up the process for connecting clean energy projects to the grid.

Renewable energy advocates say they hope to see the agency finalize both proposals in the coming months, although FERC will be facing a major shift with the departure of Chair Richard Glick, a Democrat.

Meanwhile, DOE’s new Grid Deployment Office would receive approximately $59.5 million for fiscal 2023 under the spending measure. The office was officially launched in August with a focus on developing more electric transmission resources to support a low-carbon power grid.

According to the text, $16 million would go to helping develop power grid infrastructure, while $2 million would help plan interregional power lines that cross multiple states, as well as transmission lines located offshore.

“The Department of is encouraged to deploy transmission facilities and related technologies by enhancing the reliability and resilience of the bulk power system, including HVDC [high-voltage direct current] transmission networks and interregional connects, and integrating power-generating resources into the electric grid,” Senate appropriators said in the report.

In addition, $16.5 million would be used to support state-level efforts to expand, improve or establish new grid regions. There are currently four regional transmission organizations and three independent system operators — or single-state RTOs — across the United States, and some states in the West are in the process of trying to establish a new RTO there.

While the funding for the Grid Deployment Office is welcome, it’s not clear how much it would help speed the build-out of long-distance transmission lines, said Larry Gasteiger, executive director of WIRES, a trade group that advocates for more high-voltage power lines. Building more of those lines is considered a critical step for advancing the Biden administration’s clean energy goals.

“I’ve repeatedly said that building out the transmission system to address the energy transition and meet the goals of achieving a cleaner, more resilient grid in the next two to three decades is going to require a moonshot effort,” Gasteiger said in an email. “While this level of funding may be helpful, it is hardly of a ‘moonshot’ caliber.”

Absent from the omnibus is money intended to address a national shortage of electric distribution transformers, which utilities say is threatening the reliability of the power grid.

While the bill would allocate $27.5 million to DOE’s Transformer Resilience and Advanced Components initiative, that office is focused on large power transformers and research and development efforts, according to the American Public Power Association. The trade group represents community-owned, not-for-profit utilities.

“APPA is beyond disappointed that funding to ramp up production of distribution transformers through the Defense Production Act has not been included in the Dec. 19, omnibus appropriations bill,” Joy Ditto, president and CEO of the association, said in a statement. “This is a critical issue that several industries have raised, and on which the President has called for action.”

Several other technologies that are a priority for the Biden administration’s climate plans would benefit from increases in the measure.

DOE hydrogen programs, for instance, would get approximately $316 million in total, with $163 million and $113 million overseen by the renewable and fossil offices, respectively. For industrial decarbonization, DOE would receive $685 million under the plan.

The Office of Clean Energy Demonstrations, created by the bipartisan infrastructure law last year, would be funded with $89 million in the bill, over four times what it received in fiscal 2022. The total includes $64 million for energy demonstrations and $25 million for program direction.

The office controls tens of billions in funds intended to support large-scale demonstrations of lower-carbon energy. It is being scrutinized by conservatives who are skeptical toward federal spending on emerging clean technology (Energywire, Sept. 20).

In the upcoming year, it is slated to announce billion-dollar selections for the country’s first hubs of clean hydrogen, long-duration storage, carbon capture and others.

The Advanced Research Projects Agency-Energy, DOE’s lead arm for early-stage energy research and development, would get a $20 million increase over the current fiscal year’s levels, adding up to a total of $470 million.

The office, which funds what it calls “high-risk, high-reward” concepts for clean energy, has been targeted by some Republicans who tried to zero out its funding — something that conservative skeptics of federal funding for clean energy have repeatedly attempted over the years (E&E Daily, July 15).

DOE would receive $685 million toward the goal, which would be divided up between three agency offices: the Office of Energy Efficiency and Renewable Energy ($420 million), the Office of Fossil Energy and Carbon Management ($200 million) and the Office of Science ($65 million).

The spending package directs DOE to implement a road map announced in September with recommended emissions reductions in the industrial sector through strategies such as efficiency improvements, adopting low-carbon fuels and applying carbon capture and storage technology.