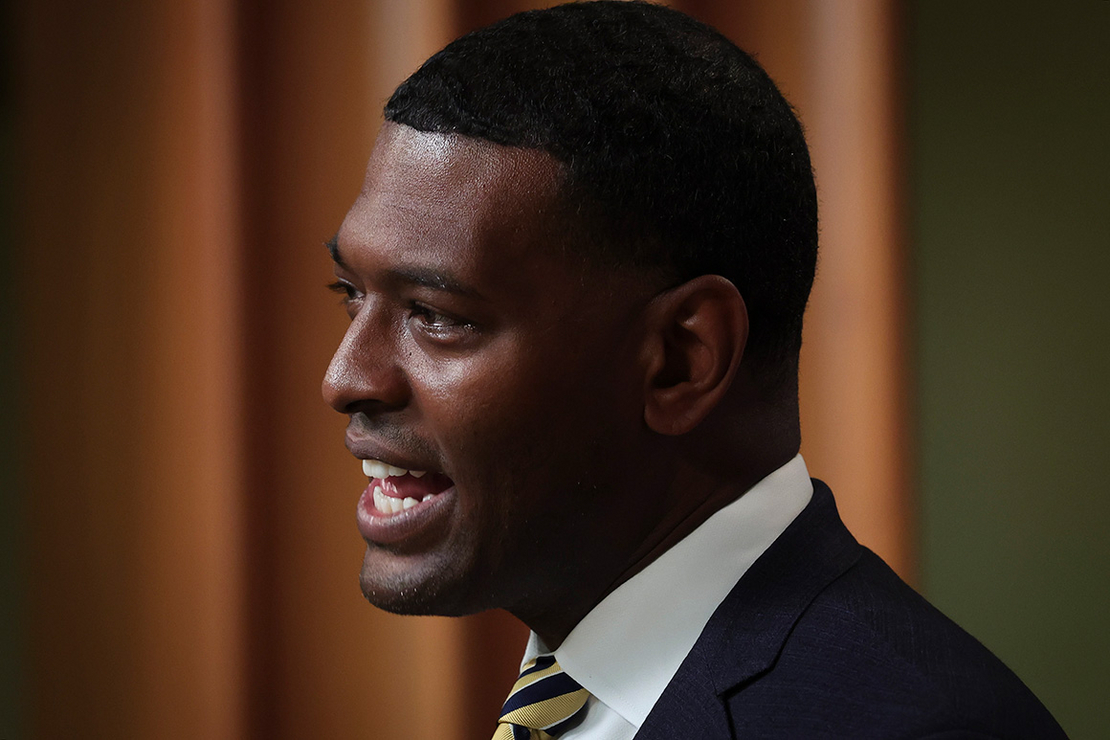 EPA Administrator Michael Regan speaks to reporters in May. Experts say it might be easier for the agency to make power plants use carbon capture technology if the climate bill is signed into law. Win McNamee/Getty Images

The Senate Democrats’ climate bill could help EPA defend new rules based on emerging technologies like carbon capture and storage by making them more cost-effective.

EPA is expected to propose climate rules for new and existing fossil fuel power plants early next year. While the agency hasn’t said what those rules will look like or how they will incorporate lessons from this year’s Supreme Court decision limiting its regulatory options, experts say the agency could base them on CCS, hydrogen or both.

The section of the Clean Air Act used by EPA to regulate greenhouse gases from stationary sources like power plants requires the agency to think about cost.

“EPA has to at least flesh out, quantify and consider when it makes its decision how much is this going to cost plant operators and how much does it cost consumers,” said Michael O’Boyle, director of electricity policy at Energy Innovation, a clean energy think tank.

That’s where the Democrats’ “Inflation Reduction Act” comes in.

The $369 billion spending package that the Senate passed yesterday and Democrats in the House hope to pass this week before August recess would extend a popular tax credit for CCS and make it more generous.

“I would describe that as a meaningful increase in the incentive — and it really does help, at least on a spreadsheet, theoretical basis — make CCS look a lot more affordable,” said O’Boyle.

The “Inflation Reduction Act” also introduces a new 10-year tax credit for clean hydrogen that would provide $3 per kilogram produced. EPA floated the idea of using green hydrogen as one option for reducing emissions from new gas plants in a white paper it published this spring.

Nathan Richardson, a law professor at Jacksonville University, said Section 111 of the Clean Air Act is mum about how costs of an environmental rule should be weighed against other factors when promulgating regulations. The courts had generally interpreted the law to require a cost-benefit analysis for regulations.

“So if EPA does an analysis that shows that the environmental benefits of its regulation are vastly outweighed by how much it costs to do the things that it says need to be done, then that regulation is probably arbitrary and capricious,” Richardson said.

Carbon capture has existed as a concept for decades but has failed to gain traction due to its high monetary and energy costs.

An Energy Department estimate from 2020 found that hydrogen could be produced at a cost of between $5 and $6 per kilogram with existing technology.

Last year’s bipartisan infrastructure bill funded DOE research and development for CCS and hydrogen. But the Democrats’ climate bill would rebalance the economics of both technologies through its tax credits. That could help the agency justify stronger rules that require the use of CCS and hydrogen.

“[EPA] has now, I would say, a much stronger argument that the incremental cost of those technologies is not so great that it argues against a stronger standard — in fact, it would do the opposite,” said O’Boyle.

Richardson said a cost-benefit analysis wouldn’t treat the tax credit as a cost.

“The cost-benefit analysis that has to be done is not total cost, it’s cost to the regulated party,” he said. “So, if somebody else is paying, including somebody at some other part of the government, then that’s something EPA can consider and should allow it to ratchet up the stringency of its regulation while still meeting the cost-benefit test.”

But improving the “cost” column of its regulatory analysis may not be enough to give EPA comfort that a rule based on CCS — or on hydrogen — would withstand likely legal challenges that could extend to the Supreme Court. The Clean Air Act requires EPA to also demonstrate that its chosen “best system of emissions reduction” is “adequately demonstrated.”

Neither CCS nor hydrogen is in widespread use for power generation, which might present a barrier.

Alan Krupnick, director of the industry and fuels program at Resources for the Future, said EPA might argue that the climate bill’s funding would lead to broader demonstration of those technologies. But that might be hard.

“Until all this funding starts having some real-world impact, it’s all, you know, prospective and aspirational,” he said.

But the economic incentives should spur innovation and deployment that might help these technologies ripen enough to form the basis of future EPA carbon rules, Krupnick said.