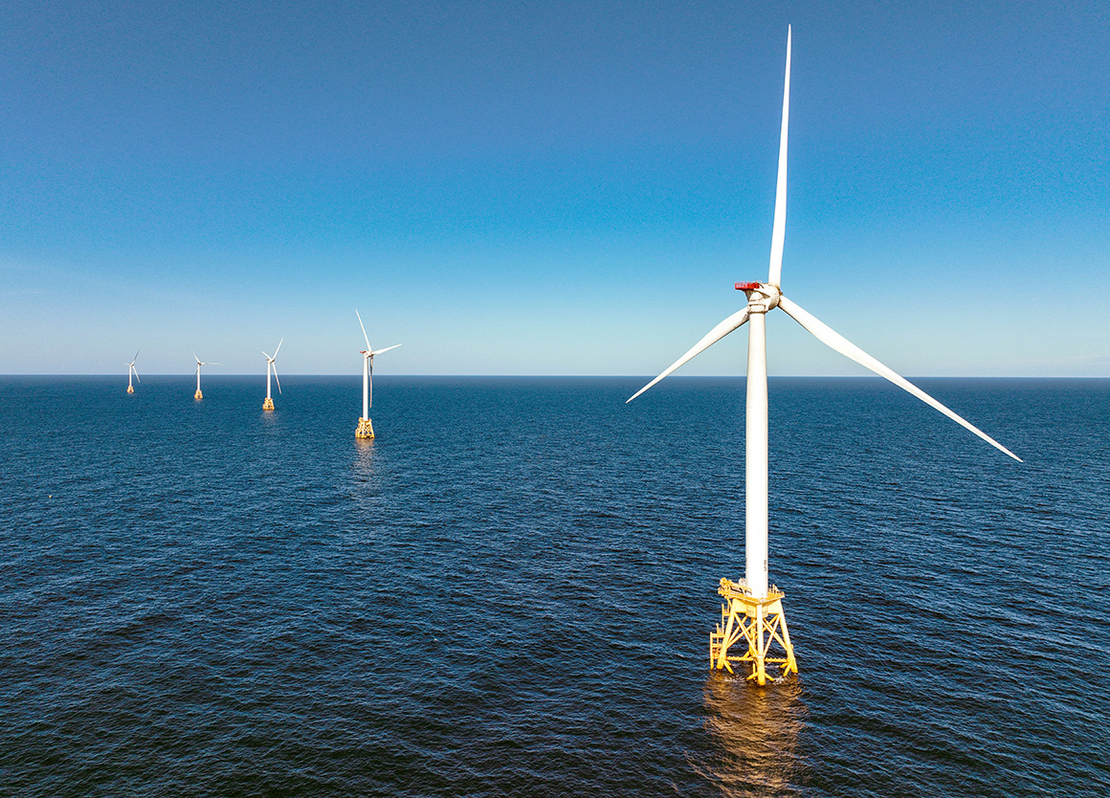 The climate bill moving through Congress would remove a moratorium on offshore wind leasing in the Southeast. John Moore/Getty Images

The Democrats’ climate bill would erase former President Donald Trump’s 10-year moratorium on offshore wind in the U.S. Southeast, but few experts are betting on a regionwide surge in projects.

Signed by Trump in 2020, the moratorium banned new leasing for all types of energy off the coasts of Florida, Georgia, North Carolina and South Carolina. It went into effect last month (Energywire, Sept. 29, 2020).

The “Inflation Reduction Act” — which the Senate passed over the weekend and is expected to be taken up by the House soon — would strip away the ban on offshore wind lease sales, while leaving it in place for oil and gas drilling.

But wind power has not generally experienced warm welcomes in the Southeast. Just one onshore wind farm — the Avangrid-owned Amazon Wind Farm near Elizabeth City, N.C. — currently generates electrons across the four moratorium states. Interest in offshore wind also has been mixed.

Lifting the moratorium may not transform that reality, even if Democrats’ climate bill becomes law, some clean energy advocates and environmentalists acknowledge.

In places such as Florida, Georgia and South Carolina, state officials largely haven’t enacted measures to promote offshore wind. This is in stark contrast to the state guarantees to buy offshore wind power that were crucial to the industry’s emergence in the Northeast and the Mid-Atlantic.

North Carolina stands out as the region’s clear exception, taking concrete steps to embrace the industry. One of its major utilities, Duke Energy, won the right to generate power from federal lease areas for offshore wind in May, as did French oil and gas major TotalEnergies SE. The state’s Democratic governor, Roy Cooper, also has laid out specific targets for the sector: 2.8 gigawatts by 2030, and 8 gigawatts a decade later.

Across other states, however, little groundwork has been done to establish offshore wind’s foothold as a future resource. And it remains unclear if, or how quickly, official indifference might transform into boosterism.

In South Carolina, for instance, Republican Gov. Henry McMaster recently signed a law calling for a first study of how offshore wind’s need for locally made parts and staging ports could benefit the state economically.

That could help convince South Carolinians that their state is well positioned to host the industry, said Hailey Deres, program associate at the Southeastern Wind Coalition.

Still, Deres added, “I don’t think that there is going to be any immediate push for an offshore wind project even if the moratorium is lifted.”

Action on offshore wind is probably farthest off in Georgia, where initial explorations from Georgia Power a decade ago haven’t led to firm commitments, and Florida, where the federal government has yet to begin preliminary offshore wind scoping that would allow for commercial development.

The Southeastern states also face a physical disadvantage in their wind conditions, at least compared with blustery waters like those off Massachusetts.

Generally speaking, “Southern states have lower wind speeds on land and at sea so the potential is lower than the Northern states,” said Walt Musial, offshore wind research lead at the National Renewable Energy Laboratory (NREL).

That might make developers less willing to attempt projects, although Musial noted that wind conditions are still considered economic for power generation in many areas.

Still, many offshore wind advocates are optimistic about ending the moratorium.

“The Southeast has historically not been viewed as the best place for wind energy development,” but ending Trump’s moratorium would give states a chance to change that, as North Carolina has already begun to do, said Chris Carnevale, climate advocacy director at the Southern Alliance for Clean Energy.

Offshore wind could also complement solar — a focus of many Southern utilities’ development — by generating power at times when sunlight grows weaker, allowing for a higher concentration of renewables on the grid, he said.

“It would be a very positive thing for our region if the moratorium is lifted,” said Carnevale.

Offshore wind’s future in the Southeast might depend on a handful of factors different from those governing its rise in the Northeast.

First is the central role of utilities and state regulators.

Where climate commitments from Democratic governors and legislators — along with independent developers — drove growth in New England, large utilities like Duke Energy, Dominion Energy, Georgia Power and NextEra will determine much of what happens in the southern Atlantic, said South Carolina-based Aaron Barr, global head of onshore wind research for Wood Mackenzie.

The moratorium removal is one of several dominoes falling in the Southeast to get the offshore wind industry — and its supply chain — moving, he said.

“Now that this moratorium may be going away, it really opens up a lot of doors,” he said.

The cost of offshore wind power may also be more of a consideration in the region than in the Northeast, where governors were often eager to profile themselves as climate leaders. Transmission costs to bring the electricity generated offshore to population centers inland can push up price tags.

Jennette Gayer of Environment Georgia said falling costs as the industry matures might demonstrate the case for offshore wind to officials in Georgia, although her state shouldn’t wait for that proof, she argued.

As turbines multiply across the East Coast, “I expect we’ll see costs come down significantly,” said Gayer. “We’re on pace to install a lot of offshore wind over the next couple of years. We should be doing that right now in the state of Georgia.”

Another special consideration for the Southeast — especially for Florida — may be vulnerability to hurricanes.

But that may be a challenge that diminishes over time. Technology is developing to deploy typhoon class turbines with larger rotors that can withstand hurricane-force winds, said Musial of NREL. Those are also likely needed for the western and central Gulf of Mexico, where the Biden administration is planning its first lease sales next year, he said.

Put together, those issues mean Florida may be a challenging offshore wind market, he said. Yet it has extensive coastlines to offer, and its two largest utilities both have strong wind credentials: Duke, which is leading offshore wind in North Carolina, and NextEra, the largest onshore wind producer in the country.

None of the complications in Florida would entirely rule out offshore wind there, particularly with the Biden administration’s push for offshore wind.

“I haven’t seen the same momentum for [the Interior Department] to create an offshore lease area off the coast of Florida as I have in the Carolinas,” Barr said. “But, you know, this moratorium is over. That could easily happen.”

In North Carolina, the offshore wind outlook has been picking up steam, and some argue that the removal of the moratorium will only accelerate that.

That’s mostly due to Duke’s activity. The utility has long been the bellwether determining whether offshore wind could take off, and its recent commitment to the sector — when it secured the highest bid for a lease off the state’s coast earlier this year — was seen by wind advocates as a turning point for the state. That’s in addition to the passage of a law last year mandating North Carolina utilities cut emissions by 70 percent by the end of the decade, which offshore wind could help secure.

North Carolina Rep. Deborah Ross, a Democrat who led the push to remove the moratorium, said the ban had represented a threat to reaching those state targets.

“It would just be leaving a utility-scale resource, you know, off the table as we’re going through this energy transition,” she said. “That’s the real reason for offshore wind is because it’s utility scale.”

Ironically, the Trump-era moratorium may have helped offshore wind reach this pivotal moment in North Carolina.

A few months before it went into effect, the Biden administration added two new lease areas to the North Carolina wind footprint, with a combined capacity to power 500,000 homes (Energywire, May 12).

That came partly at the behest of Cooper, North Carolina’s governor, who wrote in March to the Interior Department’s Bureau of Ocean Energy Management urging it to finish work on the lease areas before the ban kicked in. Members of the state’s delegation made similar pleas.

“We saw … the lease sale make it over the finish line because of the moratorium. If anything, it might’ve hastened that,” said Carnevale of the Southern Alliance for Clean Energy.

The lease sale also introduced a new player into North Carolina’s offshore wind space to drive investment: France-based TotalEnergies, which won one of the two leases.

TotalEnergies is one of the largest oil companies in the world and is experienced in offshore energy development. But importantly for North Carolina, it’s also eagerly diversifying its portfolio to offset its carbon emissions on a quest to reach 100 gigawatts of renewable power by 2030.

Ross said removing the moratorium would mean a chance to scale up, allowing the southern Atlantic states to compete for a slice of the U.S. offshore wind supply chain that’s going to be needed in the coming years, from construction experts to build the first fleet of offshore wind farms to companies to service them once they are in action. There also will be the manufacturers that make the thousands of turbines blades, towers, foundations and nacelles needed to create this industry in the United States.

“It’s a shame, because the moratorium was unnecessary,” Ross said. “It really delayed things. But, you know, we’re getting it fixed pretty darn quick.”