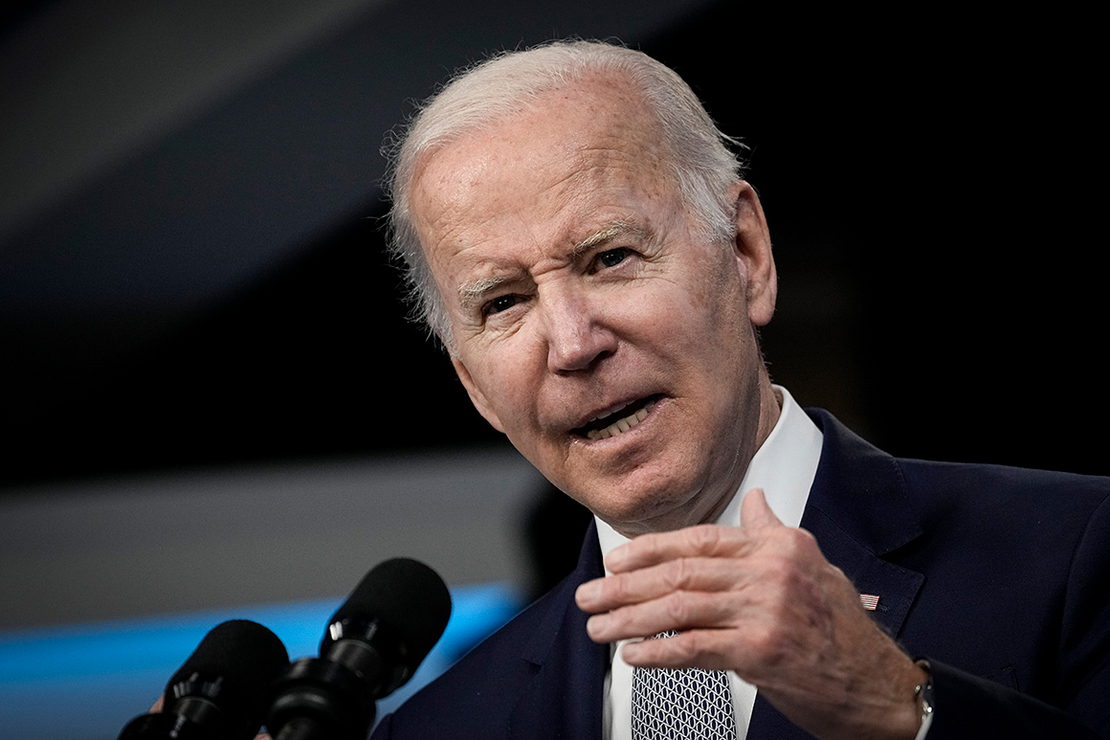 President Joe Biden is walking a fine line between taking aggressive climate action and promoting new oil and gas leasing — and some observers say his latest approach could be a winning strategy in court.

After a federal judge last year blocked Biden’s pause on new lease sales as part of his climate Executive Order 14008, the administration has moved forward with some leasing while canceling other planned auctions.

Legal experts say selective lease offerings may be a more defensible approach for Biden’s Interior Department, which is facing pressure from environmental groups that say the agency has discretion to place an outright ban on future oil and gas leases on public lands and federal waters.

“What they’re doing now, they’re being very smart about this,” said Sharon Jacobs, an associate law professor at the University of Colorado, Boulder, of the federal government’s limited leasing approach.

Last year’s ruling by Judge Terry Doughty of the U.S. District Court for the Western District of Louisiana that struck down Biden’s leasing pause was a win for red states that had argued Interior had an obligation under the Mineral Leasing Act and Outer Continental Shelf Lands Act to continue to make areas available for onshore and offshore oil and gas drilling.

Interior is fighting the ruling and made its case for its authority to implement a pause before a federal appeals court last week, but in the meantime, the agency says it is taking steps to comply with the decision by Doughty, a Trump appointee. The agency declined to comment for this article.

Interior’s most recent action on oil and gas leasing came late last week, when the agency announced it would cancel the remaining offshore lease sales in the Bureau of Ocean Energy Management’s current five-year plan — Lease Sale 258 in Alaska’s Cook Inlet and two other sales in the Gulf of Mexico (Energywire, May 12).

The decision came as a relief for climate activists who have been working to block any new offshore oil and gas leasing. But energy industry groups and Republican lawmakers warned that the loss of Lease Sale 258 — not long after the U.S. District Court for District of Columbia axed the 80 million-acre Lease Sale 257 in the Gulf of Mexico — would harm the United States.

Pulling back on domestic production would have harmful consequences, supporters of new leasing said, and U.S. offshore drilling is less risky than fossil fuel production abroad.

The Biden administration said last week that it would not move forward with the Gulf sales — Lease Sale 259 and 261 — due to conflicting legal rulings on environmental impact studies. The move came after the D.C. district court ruled in January that an analysis of the massive Lease Sale 258 in the Gulf had not adequately accounted for climate risks.

That meant the Biden administration has had five months to act before the current offshore leasing plan expires at the end of June, said Keith Hall, director of the Mineral Law Institute at Louisiana State University.

“Ideally, the administration should have started working on an enhanced climate analysis for Lease Sales 259 and 261 on an expedited basis, with a goal of completing the analysis in time to hold the lease sales as scheduled,” said Hall.

With increasing concern about maintaining adequate domestic oil supplies, Hall said, it isn’t the right time to cut back on U.S. exploration.

While the Outer Continental Shelf Lands Act does not expressly authorize lease sale cancellations, there is precedent for Interior to stop sales due to insufficient interest, as the agency had said was the case with Lease Sale 258 in Alaska, said Jacobs of the University of Colorado.

The announcement of the offshore cancellations came not long after the Bureau of Land Management said it would offer a pared back sale of 173 parcels for oil and gas drilling on public lands in June.

Biden administration officials “are on firmer ground if they say something like, ‘We’re going to delay [public lands lease sales] this quarter,'” said Jacobs, “as opposed to saying, ‘We’re just not going to do it.'”

For public lands sales, the Mineral Leasing Act offers BLM a lot more discretion to determine which lands are available for sale, especially when the agency is basing its decisions on balancing economic, social and environmental concerns, Jacobs said.

And courts have given agencies leeway when ruling on whether an action has been unlawfully withheld or delayed, she added.

Judges “know agencies have limited resources and have lots of demands on their time,” she said. “They know how complex it is and how important expertise is.”

Even as Interior resumes some leasing, it remains an open question whether the Biden administration can convince federal judges that agency officials acted within their authority and appropriately used their discretion to temporarily block new leases.

The outcome of several pending leasing cases will further define the limits of executive power to act on climate change.

Biden said last year that his administration’s leasing pause would remain in effect while Interior crafted a report that looked at the environmental impact of the entire leasing program. The agency released that report with little fanfare in November, months after the Louisiana district court blocked the moratorium.

During oral argument last week, the 5th U.S. Circuit Court of Appeals appeared unconvinced by Louisiana Attorney General Jeff Landry’s (R) position that the Biden administration did not have the power to stop new leasing. The 5th Circuit seemed sympathetic to arguments that the administration had the prerogative to shift to new policy objectives and slow down its predecessor’s actions in the meantime (Energywire, May 11).

Federal district courts in Wyoming and North Dakota are also considering challenges to the impacts of canceled or delayed lease sales in those states. The lawsuits echo claims raised by Louisiana in the litigation that is now before the 5th Circuit.

The American Petroleum Institute is pursuing its own lawsuit in the same Louisiana district court that ended the leasing moratorium. The energy industry trade group is also fighting to require the Biden administration to produce a new five-year plan for offshore leasing (Energywire, April 21).

While each of the lawsuits contends the Biden administration went too far in blocking development, those in favor of stopping new leasing say the government has shifted too much in the other direction since the Louisiana district court ordered leasing to resume.

“There’s a level of cautiousness around their reaction to that [order] that went beyond what my reading of that decision even said,” said Kyle Tisdel, climate and energy program director at the Western Environmental Law Center.

He critiqued the administration’s November report on the oil and gas program, which had been billed as a comprehensive review of the environmental impacts of leasing — but only used the words “climate change” a few times.

“I don’t know who they’re trying to convince with some of that action,” said Tisdel. “But it has resulted in very limited political success it seems like — and very little policy success.”

While the president has called for more drilling to meet immediate energy needs, he has also emphasized the importance of shifting toward more renewable energy sources.

“Executive action is hard enough when you have a clear agenda, but the Biden administration seems not to have articulated it clearly in terms of what they really want,” he said.

Environmental advocates say the Biden administration should be pushing the government’s discretionary power even farther to limit emissions.

An April report by the U.N. Intergovernmental Panel on Climate Change urgently warned of the need to move away from fossil fuels to limit catastrophic warming that is contributing to increased incidence of extreme weather, droughts, wildfire and even the spread of novel diseases.

Eliminating all new onshore and offshore lease sales would be a good start for the U.S. government to meet that directive, environmental groups say.

But recent court rulings have sent mixed signals about whether the government can lean on environmental concerns to block new leases in the face of Congress’ directive to include energy development in management of public lands and federal waters, said Jacobs of the University of Colorado.

Another judge of the Western District of Louisiana this year blocked the Biden administration’s use of the social cost of greenhouse gases, a metric that agencies use in analysis of projects — including leasing — to determine whether the effects are too harmful to warrant moving forward. The 5th Circuit has temporarily reinstated the metric while it considers the Biden administration’s appeal of that ruling.

On the other hand, the D.C. district court this year tossed out Lease Sale 257 in the Gulf of Mexico on the grounds that BOEM had failed to fully assess climate risks.

The Outer Continental Shelf Lands Act leaves it up to the Interior secretary or the president to determine national energy needs before proceeding with offshore drilling, said Miyoko Sakashita, director of the oceans program at the Center for Biological Diversity.

Under that interpretation of the law, BOEM could produce a five-year plan that does not offer any new offshore leases, she said. But the agency would still need to analyze factors like environmental risks and benefits, as well as the national energy market and state law.

From there, the government could move forward with phasing out production from existing offshore leases, Sakashita said.

“It’s so clear in this context that our national energy needs are in a rapid shift off of fossil fuels to renewable energy sources,” she said. “That undermines all of the leasing programs for offshore drilling.”