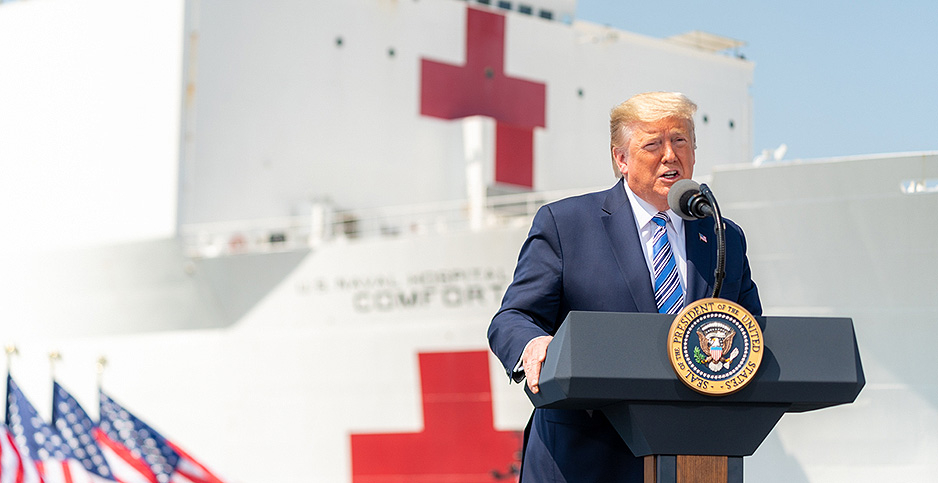 President Trump in front of the naval hospital ship Comfort before it sailed to New York City. Shealah Craighead/White House/Flickr

The law invoked by President Trump to spark production of ventilators for COVID-19 is increasingly used by federal disaster agencies to access everything from tarps for damaged roofs to translators for communicating with survivors.

Although the Defense Production Act is primarily used by the Pentagon to order critical military supplies, the Federal Emergency Management Agency has invoked it hundreds of times in recent years to get goods and services quickly after increasingly destructive disasters, federal records show.

FEMA "has increased its use" of the law "to ensure on-time delivery of materials and services" after communities are hit by devastating hurricanes, floods and other events, according to a June 2019 report by the Defense Production Act Committee, which tracks how the law is used.

Last week, FEMA Administrator Peter Gaynor said his agency planned to use the law to get about 60,000 test kits for COVID-19. But FEMA quickly backtracked and said it was able to get the kits without invoking the law.

FEMA’s increased use of the law — known as the DPA — has come as hurricanes, floods and wildfires have intensified and caused record amounts of damage, partly due to climate change.

"We’ve had some really big disasters that have really stressed the systems and the systems’ capacity to procure what it needs in time. That is something for which DPA is designed," former FEMA Associate Administrator for Policy David Kaufman said in an interview yesterday.

FEMA invoked the law 1,343 times in 2018, mostly to get immediate access to emergency shelter, food, communications equipment and other essential items during major disasters, the DPA Committee reported.

In 2019, FEMA’s use of the law declined slightly but remained "significant," an agency spokesperson said. FEMA has invoked the law multiple times for a single disaster.

During the Obama administration, by contrast, FEMA used the DPA just "two or three times a year," FEMA Deputy Administrator Richard Serino told the Senate Banking, Housing and Urban Affairs Committee at a hearing in 2013. "We use it very rarely."

Kaufman, who is now director of safety and security at the Center for Naval Analyses, said the DPA was minimally invoked when Hurricane Katrina hit the Gulf Coast in 2005 because it was "peripheral" for disaster response agencies at the time.

"It was not as well-known as one of those [emergency response] tools until after Katrina," Kaufman said.

A FEMA spokesperson told E&E News that the "increased awareness" of the DPA by both federal agencies and companies "may contribute to an increase in usage."

FEMA uses a less controversial section of the DPA than what Trump invoked Friday when he signed a memorandum directing General Motors Co. to make ventilators to help fight the worst cases of COVID-19. Trump issued the order after negotiations between the company and the administration stalled, the White House said.

FEMA doesn’t order manufacturers to produce critical products. Instead it buys goods and services that are already being produced and uses the law to require companies to fill its orders first.

"If you find yourself competing with the private sector, it brings the federal government to the front of the line," former FEMA Administrator Craig Fugate said in an interview yesterday.

When Katrina destroyed railroad tracks in Mississippi that were essential to getting vital supplies such as petroleum into the region, a railroad supply company said that because of a production backlog it would need 90 days to get new railroad ties to the Gulf Coast.

The Mississippi rail operator, instead of waiting for the supply company to fill other orders, got the next set of railroad ties that came off the production line, said William Carwile, a former senior FEMA official who was the agency’s coordinating officer in Mississippi during Katrina.

"That enabled them to get the railroad up and running in 10 days instead of 90 days," Carwile said in an interview yesterday.

The Army Corps of Engineers also invoked the DPA after Katrina when Congress ordered the agency to rebuild levees and flood walls in New Orleans that had failed catastrophically. The $14.6 billion project — one of the largest repair and construction jobs in civil works history — was projected to take between eight and 10 years.

The Army Corps completed the job in three years, in part because it used the DPA to get materials, according to a DPA Committee report in 2015.

After Superstorm Sandy battered the East Coast in 2012, FEMA used the DPA to hire translators to help the large non-English-speaking population in New York and New Jersey.

And the agency used the law extensively in 2017 — when hurricanes ravaged Texas, Florida, Puerto Rico and the U.S. Virgin Islands — to put up manufactured homes, restore Puerto Rico’s electrical system, and buy food and bottled water.

Businesses rarely object to prioritizing government orders because "people and companies want to help" after disasters, Kaufman said. "If anything, you’re offering a way to help them help without creating any exposure."

The DPA protects companies from legal claims by nongovernmental purchasers whose orders are pushed back when a government agency invokes the law to obtain items immediately.

Carwile, who was head of response and recovery for FEMA during the Obama administration, said one reason agencies are increasingly using the DPA is because manufacturers no longer maintain large inventories that enable them to fill new orders quickly.

"We’re in a just-in-time economy. There used to be warehouses around with spare stuff. Hardly anybody does that now," Carwile said. "There’s more of a need to prioritize for disasters than there’s ever been because of the type of economy we’re in."

Fugate, the former FEMA administrator, said that when he discussed invoking the section of the law used by Trump for public health emergencies, he faced opposition in the Obama administration from officials who said it was disruptive to the nation’s manufacturing.

"In our planning for pandemics in the Obama administration, the DPA was an often-discussed tool. But there was tension because the DPA is such a blunt process and major decision," Fugate said.

He was referring to the section of the law that directs manufacturers to produce certain items.

"It’s such a disruptive tool that there’s always this debate about when do we know to turn it on," Fugate said.