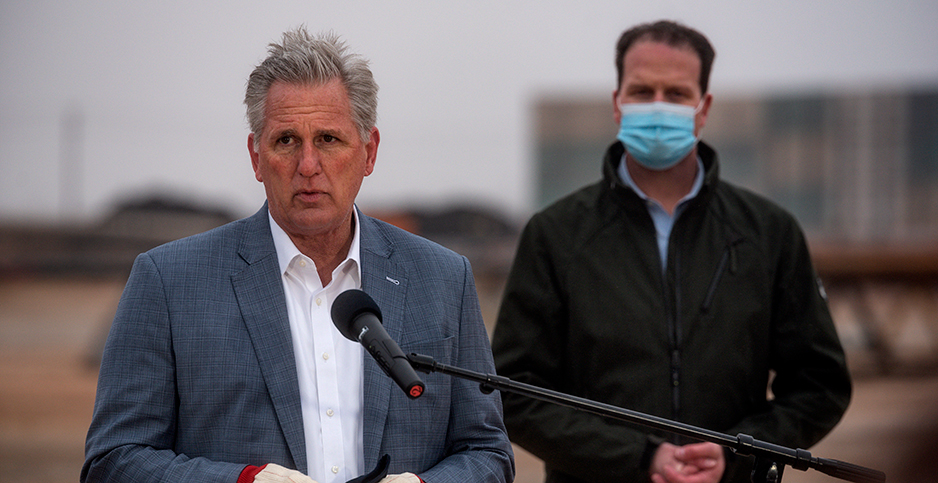 Political talking points come and go, but House Republicans have signaled an interest in keeping the focus on one particular issue for as long as possible: President Biden’s energy agenda.

And, less than two full months into the new administration, the GOP is making moves to make sure that what might ordinarily be a dry policy debate remains a highly emotional conversation over which party cares more about jobs, schools, national security and environmental protection.

As Republicans plan for a takeover of the House next year in what’s poised to be a highly competitive midterm election, GOP lawmakers and operatives have pinpointed Biden’s executive actions — including his early moves to halt oil and natural gas leasing on federal land and offshore and stop the Keystone XL pipeline — as potential political losers for Democrats.

In crucial potential swing races in states like Texas and Pennsylvania, the party is already hard at work to tie incumbent Democrats to Biden’s controversial policies.

"House Democrats’ anti-energy agenda is killing thousands of good-paying American jobs in the middle of a pandemic, and voters will make Democrats pay for that in 2022," said Torunn Sinclair, a spokesperson for the National Republican Congressional Committee (NRCC).

The group started criticizing vulnerable Democrats based on Biden’s energy agenda even before the new president took office, accusing them of not doing enough to stop the incoming administration.

Separately, House GOP leaders have been traveling around the country to talk about these issues in communities where they think it will matter.

House Minority Leader Kevin McCarthy (R-Calif.) twice in less than two weeks was in Texas, where he stood with members of his conference against the backdrops of oil rigs and refineries and challenged Biden to come tell newly jobless energy workers to their faces why they’ll no longer be receiving paychecks.

"If the president is serious about any unity, come to Houston," McCarthy said during a February visit to Enterprise Products Partners LP, a natural gas and crude oil pipeline company in Houston.

The area includes the districts of some at-risk Democrats, like Reps. Lizzie Fletcher and Vicente Gonzalez, who have sought to distance themselves from Biden’s orders in gestures of political self-preservation.

"Come look in the face of any of those workers who earn $80,000 a year and tell them why you took their jobs away, without ever talking to them," McCarthy implored Biden from afar as he gestured toward real-life energy-sector employees on hand for the photo opportunity.

House Minority Whip Steve Scalise (R-La.) has also taken an interest in helping Republicans keep Biden’s energy policies front and center. He is currently leading rank-and-file members in messaging around the consequences of drilling and pipeline bans through the deployment of the House Energy Action Team, or HEAT.

Scalise, who revitalized HEAT in 2019, is now giving the group an even bigger platform, with his office putting out weekly editions of the "HEAT Report" — essentially digests of the relevant actions House Republicans are taking to challenge Democrats and the Biden administration.

In a recent interview with E&E News, Scalise previewed what he and the HEAT members would be talking about in the coming months to impress upon voters the dangers of the Biden energy agenda and Democrats’ willingness to promote it.

Republicans will focus on national security risks inherent in allowing the United States to be dependent on other countries for oil and the consequences of letting those countries produce that oil with far lower environmental standards, Scalise said.

"People are starting to scratch their heads and go, ‘Why is he destroying American jobs, all under the guise of saving the planet, when it’s actually going to increase carbon emissions?’"

Scalise said Republicans would reach constituents by highlighting the "hypocrisy of the left," as well.

"John Kerry, the global warming czar, is flying around the world on a private plane to accept global warming awards with a 40 times higher carbon footprint than somebody who flies commercial, and he’s trying to get you to change your lifestyle," Scalise said.

The GOP will also make the point that fossil fuels will remain necessary even with the advent of clean energy — and that clean energy may not actually be as "clean" as Democrats would have people believe.

"If you drive your electric car, you’re not plugging it into a tree; you’re plugging into a source where you still need power, and most of that power comes from fossil fuels — and oh, by the way, that battery in your electric car is doing a lot more damage to the environment than a combustion engine," Scalise said.

‘There will be impacts’

Not all of Scalise’s statements tell the whole story. Neither Kerry nor Biden has indicated a desire to limit air travel to cut down on emissions, though Biden has floated ideas about boosting high-speed rail development to reduce pollution from aircraft.

And a study last year by the universities of Cambridge and Exeter and Radboud University Nijmegen concluded that, in part due to the electric grid getting cleaner, electric cars have lower emissions than gasoline cars in 95% of the world, even when electricity generation and manufacturing are considered.

The emotional impact of GOP arguments, however, could still resonate with voters whose communities might be affected by the executive orders in any number of ways.

"In Louisiana, we use the money from drilling that’s generated off the deep waters of the Gulf of Mexico to restore our coasts," said Scalise. "I think people need to see the devastating impact that these radical Biden Green New Deal initiatives are having on families and on our environment."

The upstate South Carolina district of Rep. Jeff Duncan (R), the HEAT co-chairman, is far removed from the direct anxieties being felt by Scalise’s constituents as a result of the Biden executive orders. Still, Duncan predicted that the GOP’s narrative will continue to resonate nationwide.

Already, Duncan said his constituents are being moved by "the overall effects of Democratic policies on the pocketbooks and livelihoods of Americans."

"On social media, we’re continually seeing pictures of the Exxon stores or the 7-Elevens or whatever, the QTs, what their gas prices are that people are seeing in my district, seeing their transportation fuel prices go up. And they remember, you know, $2-a-gallon gasoline, and they don’t want to go back there," Duncan said. "And they also remember the $1.60 gasoline under the Trump administration. And that’s a huge disparity."

Analysts and fact checkers have said Biden is not to blame for the rising gas prices, pointing instead to market forces, including increased demand.

Still, the Republicans’ strategy has the potential to pay dividends, said Zack Roday, managing director at consulting firm 76 Group and a former top communications aide for Republicans on the House Energy and Commerce Committee.

Roday compared the energy argument to another issue the GOP is working to prioritize in races: reopening schools. Both will have lasting implications next November, even if the immediate issue has passed.

"Parents are going to remember if their kid’s not ready to go to the fourth grade," he said. Likewise, Roday predicted, memories of job losses and rising energy costs could endure, too.

"There will be impacts that will be real and tangible," he said. "That will be the lens that I think voters will look at this from. And it’s going to be heightened in certain districts and certain battlegrounds across the country."

In addition, some polling research has found Biden’s energy policies to be among the least popular of his early executive actions.

A Morning Consult/Politico poll last month found that while nearly all of Biden’s executive actions had more support than opposition, some of the lowest support was for the oil and gas leasing pause and the Keystone XL permit revocation.

"These are near the top of the list of least favorable things Biden has done to date," Roday said.

However, a survey this month from Climate Power and the League of Conservation Voters — both organizations that support Biden — found that 66% of voters backed Biden’s climate plan, even when presented with negative arguments about it.

Rep. Katie Porter (D-Calif.), one of the NRCC’s targets for 2022 and the new chair of the House Natural Resources Subcommittee on Oversight and Investigations, recently suggested there could actually be bipartisan support for Biden’s pause on the federal oil and gas leasing program from the standpoint of whether special interests have been abusing the program.

"Who benefits from some of these decisions" about drilling on public lands, Porter asked. "Whether that’s cheaper fuel prices or cleaner air, the answer should be the collective … fossil fuel companies have a long, long history of influencing Washington policy to benefit them," she said.

Back in her district, she added, ensuring fairness and accountability in any sector, including oil and gas, is "one of the issues where there’s most agreement across the ideological spectrum."

‘When the rubber meets the road’

Still, some of the Democrats with the most to lose from being tied to Biden’s policies are consciously working to distance themselves.

Texas Reps. Henry Cuellar and Marc Veasey in January joined Gonzalez and Fletcher in writing a public letter to Biden asking him not to go through with his federal oil and gas leasing pause.

It would, the four lawmakers wrote, "imperil hundreds of thousands of jobs, entire communities, and billions of dollars in royalty revenues to the Federal Treasury and eliminate funding for important conservation programs such as the Land and Water Conservation Fund."

All but Veasey are on the NRCC’s top target list for 2022. But others, like Porter, are leaning into Biden’s climate moves and argue that they could be a big positive for the party, depending on the messaging.

Paul Bledsoe, a former Democratic Senate staffer who is now a strategic adviser at the Progressive Policy Institute, said boosting clean energy and the jobs that follow can be a real winner for Democrats, especially in the context of infrastructure legislation.

"The challenge for Democrats is to show that infrastructure is about the economy first, second and third — not about a particular clean energy agenda," he told E&E News. "Democrats have got to message this as growing the strongest, most important parts of the energy economy."

Lawmakers shouldn’t ignore job losses in fossil fuels or other impacts from Biden’s policies, but if they carry out the ideas properly and send the right message, Bledsoe said, it could paint a real contrast to the GOP.

"When you talk about losing a few jobs in a sector that’s declining, that’s inevitable. When you talk about growing millions of jobs in new sectors, that takes policy," he explained. "I think the Republicans will be highly vulnerable if they block infrastructure, and they want to score a few points before the real debate begins."

"Once infrastructure legislation is introduced, Democrats will show the number of jobs that will be created in each Republican district," Bledsoe added. "And that’s when the rubber meets the road."