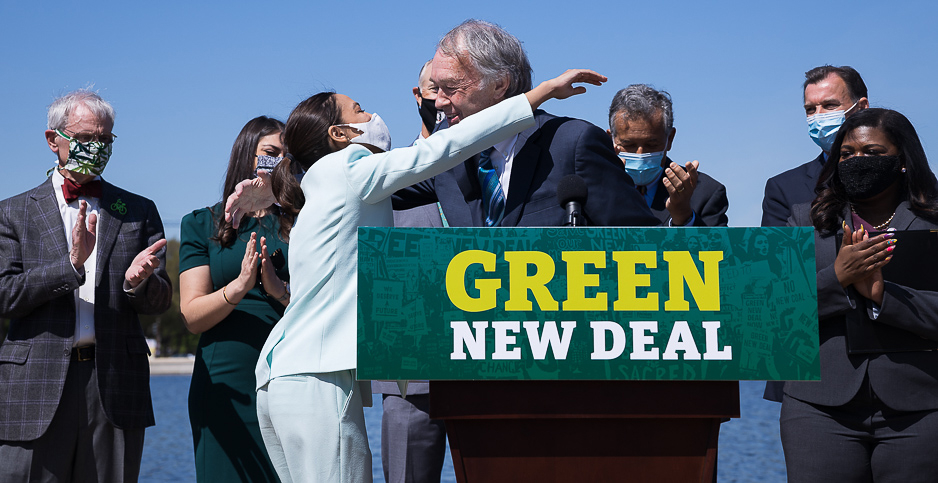 Progressives reintroduced the Green New Deal yesterday to a new political environment and a climate debate changed significantly since they first outlined the resolution two years ago, but they face challenges as they press to influence the infrastructure debate on Capitol Hill.

Sen. Ed Markey (D-Mass.) and Rep. Alexandria Ocasio-Cortez (D-N.Y.) made a mark on climate politics in 2019 when they first introduced the Green New Deal resolution — a broad document that calls for a 10-year mobilization to overhaul the economy in the face of climate change and a variety of related issues.

The revamped resolution, introduced yesterday ahead of President Biden’s international climate summit this week, does not offer any specific policy prescriptions.

But it comes amid seismic shifts in the private sector and a 2020 presidential campaign that saw Democrats fighting to outdo each other on climate.

Progressives see a shift in public perception that could allow them to push the Biden administration to go even bigger — and more expensive — as Congress begins to consider the president’s $2.3 trillion infrastructure plan.

"Do we intend on sending a message to the Biden administration that we need to go bigger and bolder? The answer is absolutely yes," Ocasio-Cortez said.

When they first unveiled the Green New Deal in 2019, Markey said, "we did not have debates about how all of these issues came together — racial, health, education, housing and climate issues."

Now, the environmental justice movement has a much bigger national presence, and Democrats generally agree that climate policy should touch on issues across the economy.

"Two years ago, on the day we were introducing the Green New Deal, General Motors was not planning on having no additional internal-combustion engines being manufactured by 2035," Markey told reporters yesterday.

Supporters said the Green New Deal is an organizing tool that brings more people to the climate movement and sets a high bar for what climate policy should achieve, even if it does not propose specific ideas to get there.

The Green New Deal has undoubtedly been a polarizing force.

Republicans were quick to label it a socialist wish list and to make it a wedge issue in moderate districts around the country, a move they believe helped them scrape back some of their midterm House losses in 2020, despite Biden’s victory.

They went so far as to set up a vote on the resolution on the Senate floor, forcing most Democrats to vote "present" while the GOP unanimously rejected it.

In part because the resolution is so broad, Republicans have also used it in messaging against Biden’s infrastructure proposal and any number of other climate and clean energy policies.

"I think infrastructure needs to stay focused on infrastructure, and I’m concerned about how much of the proposal to date — the infrastructure bill — has been a down payment on the Green New Deal," Energy and Commerce ranking member Cathy McMorris Rodgers (R-Wash.) told reporters yesterday.

Louisiana Rep. Garret Graves, the top Republican on the House Select Committee on the Climate Crisis, pointed to Saikat Chakrabarti, Ocasio-Cortez’s former chief of staff, who in 2019 said the Green New Deal was an effort to overhaul the entire economy.

"I take the former Chief of Staff to Congresswoman Alexandria Ocasio-Cortez at his word when he said the quiet part out loud: the Green New Deal is not about climate, but instead a justification for upending and transforming the American economy into a socialist dream," Graves said in a statement.

Some moderate Democrats also view the Green New Deal as unserious — and a pain in the side when Republicans bring it up.

But while party leaders don’t generally embrace the Green New Deal, it has also influenced the way Democrats talk about climate change.

The clout within the Democratic Party that progressives fostered through the Green New Deal — and the presidential candidacy of progressive Sen. Bernie Sanders (I-Vt.) — directly shaped what ultimately became President Biden’s climate plan.

Ocasio-Cortez and Varshini Prakash of the Sunrise Movement ended up on the climate committee for the Biden-Sanders Unity Task Force on Climate Change during the campaign. Ocasio-Cortez yesterday said the Biden administration has "shown an adaptiveness" on climate.

"Last year, we worked on the climate Unity Task Force, and the amount that we have negotiated that has already been incorporated in the Biden administration’s approach so far is commendable," Ocasio-Cortez told reporters.

‘Not really the Biden plan’

While the resolution is largely a messaging document, progressives have backed it up over the last two years with a slate of bills to invest in housing, clean energy and public works.

Several have been reintroduced this week, including a measure to invest massively in public housing and efficiency retrofits (E&E Daily, April 20).

Also, the Democratic mainstream and its energy and environmental policies have come closer to the Green New Deal’s aspirations.

But pushing Biden to go even bigger on infrastructure could also be difficult, given the thin margins in both houses and the possibility that major legislation would pass the Senate on a majority vote via the budget reconciliation process.

Still, Democrats largely agree on the high-level targets, even if they disagree about how exactly to get there.

Biden is expected this week to announce a new nationally determined contribution under the Paris Agreement calling for a 50% reduction in greenhouse gas emissions compared with 2005 levels by 2030.

That mirrors what scientists have said the world needs to hit to avoid the worst effects of climate change, and it’s roughly in line with the Green New Deal, which calls for a 40% to 60% emissions decrease compared with 2010 levels by 2031.

Ultimately, the Green New Deal is "not really the Biden plan," said Rep. Kathy Castor (D-Fla.), chair of the Select Committee on the Climate Crisis. But Republicans, she said, run a risk if they continue to demonize the Green New Deal.

"There’s this consensus along the entire spectrum all across America that they want Congress to act, and if [Republicans] are going to spend their time just throwing rocks and not being constructive, they do so at their peril," Castor said.