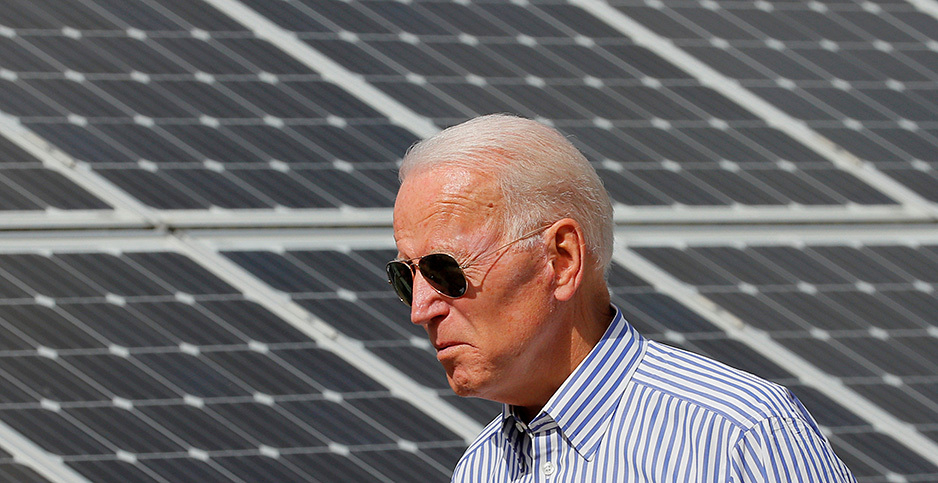 The Biden administration is preparing to flip President Obama’s climate playbook on its head.

Obama focused his agenda on greenhouse gas regulations, with some investments on the side. President Biden has promised to unveil pollution rules as well — but the heart of his climate plan is a multitrillion-dollar infrastructure package that’s taking shape now.

That means Biden’s climate legacy could depend on the shape and size of a politically contentious build-out that stands to alter the nation’s direction on transportation, energy generation and public lands.

Although U.S. infrastructure like roads and bridges is often derided as "crumbling," the electricity grid is one of the few sectors to see its annual investment grow. Permitting, not investment, is the major hangup to expanding the grid, some experts said.

Federal funding will need to be used for decarbonizing private entities, like homeowners and investor-owned utilities, rather than just public projects. And as the only large-scale way to remove carbon from the air, natural infrastructure like forests and grasslands will have to be more than an afterthought.

Democrats aren’t starting from scratch on these issues. In many cases, they’re simply looking to supersize existing programs, like Energy Department weatherization grants. In other cases, they’re following the model set by Obama’s 2009 stimulus bill, the American Recovery and Reinvestment Act.

"The Recovery Act in 2009 really demonstrated that even a small amount of money led to some extraordinary gains in renewable electricity costs," said Trevor Higgins of the Center for American Progress.

"But time is tight, and we need to do much more. And the scope of what’s possible now, at this point, is just an order of magnitude more than would’ve ever been previously considered 10 years ago," added Higgins, CAP’s senior director of domestic climate and energy policy.

Obama’s 2009 stimulus offered about $90 billion for clean energy. That’s the largest ever U.S. investment in the sector, though it was a fraction of the roughly $840 billion law.

Biden campaigned on spending $2 trillion on climate and infrastructure over 10 years, though some Democrats are now floating top lines as high as $4 trillion.

Here is some of what Biden could do on infrastructure and what it would mean for the climate.

The green mantra "electrify everything" will reshape the landscape for delivering energy.

At the neighborhood and household level, distribution lines — the so-called last mile of the network — will need to be rebuilt to handle higher loads from electric vehicles, induction stoves and other green technology.

If not, distribution bottlenecks could lead to blackouts or brownouts; distribution already accounts for about nine in 10 outages. Transmission also poses a problem.

"We’d better start building those lines now, or there’s going to be a demand issue," said Otto Lynch, an engineer on the American Society of Civil Engineers’ Committee on America’s Infrastructure.

"If everybody in Chicago buys electric vehicles tomorrow, they’re hosed. There’s no way they can actually get that much electricity into Chicago."

Investment in transmission infrastructure has increased 40% since 2012, reaching $21.9 billion in 2017, and distribution system investments have seen a similar rate of increase, according to the ASCE.

But more stations and transmission lines will be needed to connect wind and solar power — often sited in rural areas — to the communities that need it. The ASCE projects that the gap between states’ renewable portfolio standards and their transmission infrastructure will reach $197 billion by 2029.

In 2009, Obama’s stimulus provided the Energy Department with $4.5 billion to modernize the grid.

Tax incentives, grants and loans are ways the federal government can influence utilities’ energy mix outside the regulatory arena.

Obama’s stimulus boosted many of those programs for a couple of years. A longer extension, paired with increased funding, could reshape the way companies research and plan clean energy, CAP’s Higgins said.

"The main difference is the scale of what we’re talking about," he said, pointing to the example of renewable energy tax credits that Congress has renewed only on a short-term basis or retroactively, like the production tax credit.

"To set them for a 10-year availability would be, in one way, a similar policy that everyone’s familiar with. But in another way, it would be a step change in the effectiveness of the program," he said, adding that the same policy framework could expand to cover new programs, like subsidizing clean energy storage.

The feds also control energy production on public lands and offshore. The Interior Department is working to more than triple its jurisdiction’s renewable capacity by 2025, as required by the December coronavirus relief legislation, according to S&P Global.

This sector is responsible for the largest share of U.S. emissions, and it is one of the toughest to decarbonize.

Electric vehicles are a priority of Biden’s, and he’s promised to develop a nationwide network of charging stations, along with incentives to encourage people to buy EVs.

Two other options might come more quickly: Zero-emissions buses could be deployed without major construction work, and increasing service frequency on existing transit routes could attract people away from cars.

That still leaves rural and exurban areas, where sparse populations and long distances leave gas-powered vehicles as the most reliable option.

An irony of Biden’s climate plan is that a blitz of construction and manufacturing would almost certainly drive emissions up, at least in the short term.

Democrats’ answer to that paradox is twofold: Clean up American manufacturing and source everything domestically.

Retooling factories to produce clean technology — and to produce it cleanly — could be accomplished through a series of grants, tax credits and loans.

Some of those programs already exist and could be expanded, while others have lapsed and could be reinstated, according to a policy letter signed by more than 50 green groups.

More controversial to the political left is carbon capture and sequestration. Some manufacturing processes, like steel or concrete, are so energy-intensive that only fossil fuels can currently power them. Some Democrats are resistant to promoting CCS for fear that it could offer a lifeline to fossil fuels, but Biden has embraced the concept.

Commercial and residential buildings account for 12% of U.S. emissions, while industry accounts for 22%, according to 2018 EPA data.

Biden has already called his shot for this sector.

After one week in office, the president signed executive orders committing to conserving 30% of U.S. land and waters by 2030, also known as the 30×30 pledge. His orders also established a Civilian Climate Corps to restore public lands.

Many of those details remain to be set, including the size of the climate corps.

The federal government controls less than 30% of U.S. landmass, leaving most areas in the hands of private landowners or local and state governments. Environmentalists have called for providing more funding for those entities through the Forest Service’s state and private forestry programs, as well as the Agriculture Department’s sustainable farming and other conservation programs.