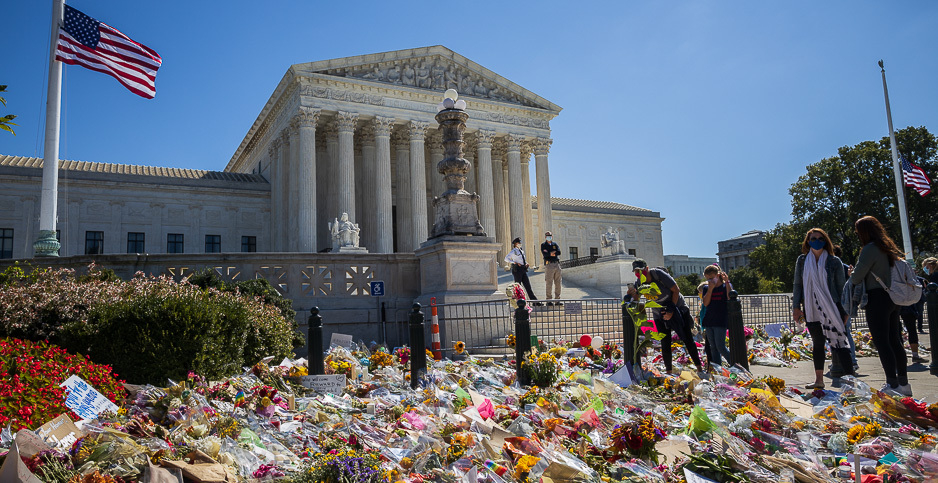 The absence of the late Justice Ruth Bader Ginsburg on the Supreme Court this coming term is unlikely to change the outcome of two looming battles over water rights and Endangered Species Act records, but legal experts say her death will have a lasting impact on environmental jurisprudence at the nation’s highest bench.

As President Trump embarks on a speedy quest to confirm a replacement for Ginsburg, who died Friday at age 87 from complications related to pancreatic cancer, the court will begin holding telephone arguments in two weeks with only eight justices present. Three of those justices are largely sympathetic to environmental interests, and five are generally more skeptical.

The empty seat on the court could limit environmental cases that the court takes up in the short term and, if a conservative justice is installed on the court, shift the outcome of some high-profile cases in the near future.

So far, the Supreme Court has just two environmental cases on its docket for this term — a dispute between Texas and New Mexico over stored floodwaters in the Pecos River and a fight between the Sierra Club and the federal government over records related to an EPA rule. Ginsburg wasn’t expected to play a consequential role in the outcome of either of those cases.

The chances of rulings in favor of environmental groups — or even recognition of their standing in litigation — could soon get a whole lot slimmer, said Robert Percival, director of the Environmental Law Program at the University of Maryland’s Carey School of Law.

"If a sixth conservative Justice is confirmed before Trump leaves office, Chief Justice John Roberts no longer will be the swing vote," he said, "and the other five conservatives would be free to embrace more extreme interpretations of the environmental laws."

With eight justices, the chance of a 4-4 deadlock increases.

When the Supreme Court can’t resolve a stalemate among its members, the ruling of the lower court stands. Those benches are now filled with 53 Trump appointees, bringing the total number of judges he has selected to more than 200 (E&E Daily, June 24).

Trump has pledged to act swiftly to replace Ginsburg with a conservative justice.

If he is successful, he will have appointed three of the court’s members, including Justice Neil Gorsuch, whom Trump selected after Senate Republicans blocked President Obama’s pick of U.S. Court of Appeals for the District of Columbia Circuit Judge Merrick Garland as a replacement for the late conservative Justice Antonin Scalia.

Until then, the court will operate with only eight justices, likely reducing the number of environmental cases — or any cases, for that matter — that the bench will hear this term, said Jonathan Adler, a law professor at Case Western Reserve University.

It takes the votes of four justices to accept a petition, and the court grants only about 1% of the cases it receives each term.

"Generally," he said, "when the court is short-handed, the justices are more careful about not accepting cases they don’t need to take."

A win by Democratic presidential nominee Joe Biden in November would likely send federal agencies back to the drawing board on Trump-era environmental rollbacks — which would also prompt fresh rounds of litigation and potential blockades by a more deeply conservative court (Energywire, Sept. 21).

Environmental groups and the blue states that often join them in lawsuits against the Trump administration’s rules say they are already girding for years of prolonged battles — no matter who is on the Supreme Court and in the White House next year.

"We’re going to have our work cut out for us to try to undo the damage," Oregon Attorney General Ellen Rosenblum
said of the fight against Trump’s environmental rollbacks.

With the loss of Ginsburg, green groups will also lack an advocate for their standing to bring lawsuits in the first place, which the justice addressed in the 2000 case Friends of the Earth Inc. v. Laidlaw Environmental Services Inc. (Greenwire, Sept. 19).

"The Laidlaw opinion is emblematic of Justice Ginsburg’s fervent insistence that the ‘little guy’ deserves a day in court — deserves at least to be heard," said Cale Jaffe, director of the University of Virginia School of Law’s Environmental Law and Community Engagement Clinic.

On the first day of its term, the Supreme Court will dive into a battle between Texas and New Mexico over each state’s share of water from the Pecos River after a 2014 storm.

About a year after Tropical Storm Odile inundated the waterway, the Bureau of Reclamation released floodwaters from a New Mexico dam downstream into Texas.

The problem? The two states are subject to a 1948 compact that ensures the Lone Star State receives its fair share of flows from the river. The special master who oversees the states’ water-sharing agreement determined that the floodwater release should be counted toward Texas’ apportionment.

Texas disputed the finding, and the Supreme Court agreed to get involved — despite objections from the Justice Department.

The case is one of several interstate water wars pending before the high court, including a dispute between Florida and Georgia over flows in the Apalachicola-Chattahoochee-Flint River Basin.

Legal experts anticipate many more similar cases will come to the court as climate change intensifies drought and ramps up demand for increasingly limited water supplies.

Oral arguments are scheduled for Oct. 5.

Environmental groups and industry interests have aligned in a high court battle over the government’s duty to publicize records related to decisionmaking on environmental and other rules.

The justices will examine whether the 9th U.S. Circuit Court of Appeals correctly barred the government from invoking a Freedom of Information Act exemption to protect a draft finding that a proposed EPA rule for cooling water intake structures at power plants would harm vulnerable species.

Fish and Wildlife Service and NOAA Fisheries officials later issued a "no jeopardy" biological opinion for the final rule, which EPA released in 2014.

Sierra Club has called for access to the draft document, but federal officials have said it is subject to FOIA Exemption 5, which shields pre-decisional records. Groups like the American Farm Bureau Federation and American Forest Resource Council that often face off against the Sierra Club in court have joined the environmentalists’ call for greater transparency.

Arguments will take place on Nov. 2.

A yearslong battle over the first marine monument in the Atlantic Ocean may make its way to the justices this term.

Commercial fishing groups are calling on the Supreme Court to find that the Obama administration exceeded its authority when it designated the Northeast Canyons and Seamounts Marine National Monument in 2016. They filed their petition after President Trump unwound fishing restrictions in the sanctuary, a proclamation the challengers say could be reversed by a future administration.

Environmental groups are advocating for the monument’s continued protection.

The Supreme Court could choose to take up the government’s battle to use $2.5 billion in military funds to build border walls between the United States and Mexico.

Lower court have twice struck down the Trump administration’s attempt to transfer the Defense Department funds after Congress appropriated just $1.375 billion for the project. Green groups, states and community advocates have led the charge against the scheme in court.

The solicitor general’s office is making the case that not only was the funding transfer permissible, but environmental challengers in the case did not have standing to bring the lawsuit in the first place.

In a companion petition, a Texas county and community groups have argued that the justices should take up their challenge to the border wall project if the court decides to grant the government’s plea.

The Supreme Court has gotten involved in preliminary stages of the border wall litigation but has not yet weighed in on the merits of the case.

Environmental groups’ standing is again in the crosshairs in a fight over public roads that cross federal lands in Utah.

The solicitor general’s office has asked the Supreme Court to find that the Southern Utah Wilderness Alliance and the Wilderness Society should not be able to intervene in negotiations between federal and state officials over ownership of a large network of roads, cow paths and two-track paths across the Beehive State.

State and local officials in Utah have filed a companion petition that also takes aim at the green groups’ involvement in the case.

The court will soon decide whether it will hear a challenge by coal-producing states over Washington state’s decision to block a water permit for the coal export project Millennium Bulk Terminals.

Wyoming and Montana argue that the decision to bring the project to a halt violated protections for interstate commerce enshrined in the Constitution.

Developers of the PennEast natural gas pipeline are asking the high court to overturn a ruling by the 3rd U.S. Circuit Court of Appeals that blocked construction of the 116-mile project on state land in New Jersey.

The 3rd Circuit found that PennEast Pipeline Co. LLC had violated the Garden State’s sovereign immunity protected under the 11th Amendment to the Constitution when it sought to condemn state-controlled land in the pipeline’s path.

In June, the justices invited the solicitor general to weigh in on the case, but the Trump administration has not yet filed its response with the court.

The justices are currently weighing whether to pick up a petition in Baltimore’s climate case against energy companies, which was sent back to state court in 2019. Energy companies have asked the high court to weigh in on whether the case should be heard at a state or federal bench.

Prior efforts by industry to engage the Supreme Court on the issue of climate damages against oil majors have failed, though companies have promised there are more petitions to come.