How the New Deal turned green 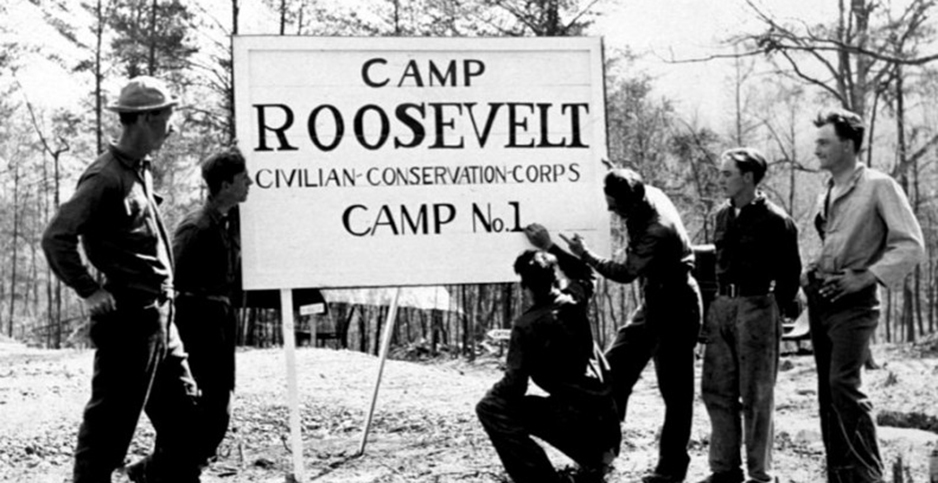 The New Deal, as part of the Green New Deal, isn’t often the piece that gets the most attention.

But several historians said the nod to the legacy of President Franklin D. Roosevelt is critical to understanding what Green New Deal supporters are trying to accomplish — and why it’s elicited such a blowback in some political circles.

Not only is there precedent for their ambitious plan to fight climate change with a massive government-led jobs program, but many of the same criticisms levied at the Green New Deal are no different from the ones lobbed at Roosevelt in the 1930s.

Because of that, said the historians, the political battle over the Green New Deal is about more than just jobs, climate change or even the 2020 elections.

It’s the latest round of the longest-running bout in American politics — the debate over the role the federal government should play in shaping U.S. society.

"What is happening is that the conversation is changing in a way that it hasn’t changed since 1980 and [President] Reagan," said Nick Taylor, author of "American-Made: The Enduring Legacy of the WPA, When FDR Put the Nation to Work."

He said the current fight over the Green New Deal fits into a broader pattern of U.S. history.

Reagan’s election, he argued, was in part a pushback of the big-government philosophies of Roosevelt and later President Johnson, who tried to emulate the spirit of the New Deal with his own Great Society initiative.

As Reagan once famously put it: "The nine most terrifying words in the English language are: I’m from the government, and I’m here to help."

Taylor said much of the political power of the Green New Deal lies in how it reimagines the way the federal government can respond to a massive social problem.

Nearly 90 years ago, it was marshaling the full strength of Washington against the Great Depression and an unemployment rate of about 25 percent.

With the Green New Deal, it’s arming the government with the power to combat climate change with an initiative that would affect broad swaths of the U.S. economy, from energy to agriculture to transportation.

Roosevelt’s New Deal was the "investment that only the government can make," Taylor said. "The same is true of the Green New Deal."

For that reason, he said, it makes sense that opponents of the Green New Deal are echoing the criticism of the New Deal. Both have been described as a socialist experiment, a big government takeover.

"You can take the arguments from the 1930s and the arguments [from] today, and nobody can tell when they were made," Taylor said.

Reflective of this debate are shifting U.S. attitudes toward socialism and capitalism.

That stands in stark contrast to Republicans and Republican "leaners." Only 16 percent of that group had a positive view of socialism; 71 percent liked capitalism. It’s revealing, too, how different age groups viewed the socialism-capitalism debate.

Among U.S. adults polled last year by Gallup, 51 percent of those between the ages of 18 and 29 had a favorable view of socialism — making that group its biggest supporter by far. Those between ages 30 and 49 came in second at 41 percent.

So it’s not a surprise that the energy behind the Green New Deal is coming from groups like the Sunrise Movement, a youth-led environmental group.

"The Green New Deal is not just another climate policy," wrote Stephen O’Hanlon, a spokesman for the Sunrise Movement, in response to written questions. "Like the original New Deal, it is a call to redefine politics and establish a new social contract for America, in line with the economic and ecological realities of the 21st century."

This new contract is a liberal wish list: from universal health care to a 10-year goal of generating "100 percent of the power demand in the United States through clean, renewable, and zero-emission energy sources," according to a congressional resolution in support of the Green New Deal.

Another central pillar of the Green New Deal is its aim to "provide unprecedented levels of prosperity and economic security for all people of the United States."

In that, one historian saw a parallel to a different legacy of Roosevelt’s presidency: a 1944 speech in which he laid out what the 32nd president described as a "second Bill of Rights" — now sometimes called the Economic Bill of Rights.

According to author Benjamin Alexander, it was the "most radical speech that FDR ever delivered."

"Both the Green New Deal and the Economic Bill of Rights are expressions of sentiment," said Alexander, who wrote "The New Deal’s Forest Army: How the Civilian Conservation Corps Worked." "They both list rights they consider the government is obligated to provide and guarantee — including the right to employment."

Alexander said there’s a political bent to both proposals.

Roosevelt delivered his 1944 speech as he was preparing for another presidential campaign that year; the Green New Deal is unquestionably a political rallying tool ahead of the 2020 elections.

"The Green New Deal really is a manifesto of the progressive wing of the Democratic Party," he said.

Indeed, one common criticism of the Green New Deal is that it’s nothing more than a political document with little in the way of actual policy proposals.

But Alexander said that’s not unlike Roosevelt’s rollout of the New Deal at the 1932 Democratic convention, when he pledged a "new deal for the American people."

Said Alexander: "The New Deal wasn’t a master plan unveiled at one time. … In 1932, when FDR first started using that term, it was anybody’s guess what he meant."

There were a few hints, of course.

One of those was Roosevelt’s vision of killing two birds with one stone by hiring U.S. workers to plant trees and — in the process — protect farmland vulnerable to erosion.

"We know that a very hopeful and immediate means of relief, both for the unemployed and for agriculture, will come from a wide plan of the converting of many millions of acres of marginal and unused land into timberland through reforestation," said Roosevelt in his 1932 speech.

The idea later would become a central mission of the Civilian Conservation Corps, a New Deal program that would go on to employ millions of workers and plant more than 2 billion trees.

For its part, the Green New Deal has a few similarly broad proposals.

It calls for improvements to the electrical grid, an expansion of renewable energy manufacturing and upgrades to "all existing buildings in the United States … to achieve maximum energy efficiency."

Demond Drummer is the executive director of the nonprofit group New Consensus and one of the experts working to turn the Green New Deal into a reality.

He gave credit to the original New Deal as inspiration but said it’s more apt to compare their vision to the method in which Roosevelt shifted the U.S. economy to fight Japan and Germany in World War II.

It’s about "mobilizing the whole of our society to rebuild our economy and save the planet," Drummer said.

One idea he mentioned revolved around solar energy.

He said the United Statesimports many of its solar panels from China and that a likely facet of the Green New Deal would be to ensure that those solar panels are instead manufactured by U.S. workers and installed by U.S. technicians — all for good pay.

Drummer said there’s no reason that the federal government couldn’t support a Green New Deal in the same way it supports military spending.

"People forget that our military industrial complex was entirely created by public-sector investments," Drummer said. "Can we do that for the parts and components we need to accomplish our broad goals around climate?"

He did note, however, that there was one critical difference between Roosevelt’s efforts and the Green New Deal — the commitment to make opportunity available to everyone and not show favoritism to white Americans, as happened during the New Deal.

Best known in that respect is the work of the Federal Housing Administration, an agency established in 1934 that perpetuated segregation in the U.S. housing market.

"We believe the scale, speed and scope of the Green New Deal requires that we literally include everybody in this mobilization," he said. "That’s the practical argument. And it’s the right thing to do."

Drummer didn’t set a firm timeline for the release of an in-depth plan but said the goal is to "set the agenda for 2020."

"This entire year is doing the research and doing the work," he said. "The goal is to keep the ball moving."

Practically speaking, there’s no need to finish the plan before 2020 anyway.

A Green New Deal has no chance of passage right now, with President Trump in the White House and skeptical Republicans in control of the Senate. Both have mocked the Green New Deal since its introduction. Plus, the idea doesn’t have the full support of congressional Democrats.

What’s notable, however, is that several Democratic presidential candidates have co-sponsored a resolution that backs the Green New Deal.

That opens the door for a political climate that could allow the Green New Deal to advance through Congress — though that’s almost certainly contingent on a Democratic sweep in 2020.

When Roosevelt, a Democrat, entered the White House in 1933, he had a partner in a Democratically controlled House and Senate.

"When he first got there, it was pretty much a blank check," said Paul Sparrow, director of the Franklin D. Roosevelt Presidential Library and Museum.

That was critical because the New Deal didn’t come as one shiny package, but instead was rolled out as a series of nearly 100 pieces of legislation and executive orders from 1933 to 1939, Sparrow said.

"The most important thing to remember is that Roosevelt’s attitude was that ‘we have to do something’ [to respond to the Great Depression]. If something doesn’t work, discard and do something else," Sparrow said. "They were in a situation that was unprecedented. They didn’t know what was going to work, so they tried a number of different things."

But central to the mission was the belief that the federal government was the entity that had the power and responsibility to address a major crisis.

"In that sense, the very sort of visionary declarations in the Green New Deal are reflective of what FDR did when he announced the New Deal," Sparrow said.

It’s a comparison that proponents of the Green New Deal aren’t shying away from.

"’The only thing we have to fear is fear itself … terror which paralyzes needed efforts to convert retreat into advance.’ — FDR 86 years ago today at his first inaugural," wrote Sen. Ed Markey (D-Mass.) in a Twitter post on March 4. "We face that same fear now, but that same defiant optimism informs the bold goals of the #GreenNewDeal."