How the oil industry is shifting to offshore wind 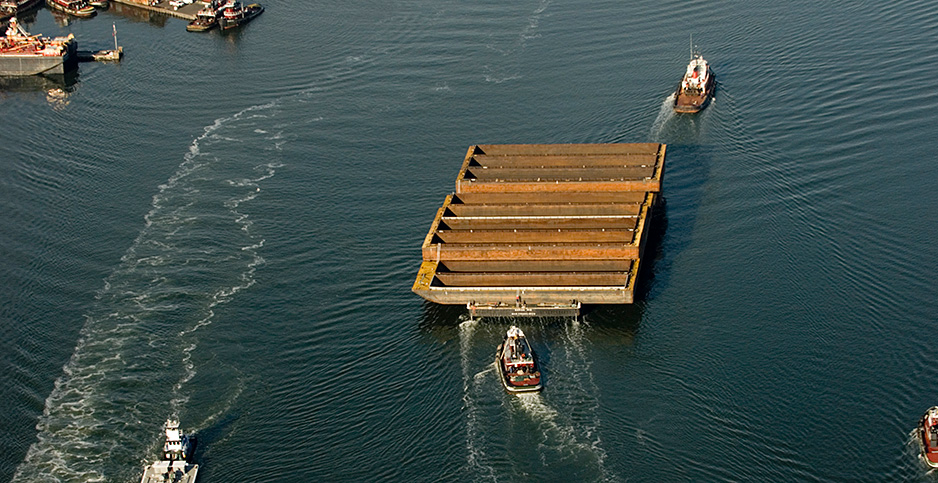 A tugboat owned by Crowley Maritime Corp. pulls 17 barges through New York Harbor in this 2009 file photo. The shipping company is shifting to the U.S. renewable sector after working closely with the oil industry for decades. Aero-Imaging, Inc/Newscom

In 1968, Florida-based shipping company Crowley Maritime Corp. loaded a drilling rig onto a barge, hauled it around the Alaska coast to a beach near Prudhoe Bay and helped to open the state’s North Slope oil field.

A year later, the privately owned company sent a 32-barge sea lift to the oil field, led by a spotter plane to help navigate around ice floes. Crowley’s tugboats were among the first to respond to the 1989 Exxon Valdez oil spill in Alaska’s Prince William Sound, and its barges helped deliver equipment to offshore oil fields from Singapore to the Gulf of Mexico.

But after keeping close oil industry ties for over a half-century, Crowley is now looking to the next frontier in energy: renewable power sources like offshore wind.

"I think this industry, offshore wind but renewables in general, is going to be a platform for Crowley as they move forward for the next 100 years, without a doubt," said Jeff Andreini, the head of Crowley’s new energy division, which was created two months ago.

The Jacksonville, Fla.-based company is not alone: Many oil industry suppliers are looking to clean energy after economic fallout from the coronavirus pandemic hammered fossil fuel companies last year. In some ways, they are in a race against time, as renewable project proposals can face delays or may not come to fruition.

The oil field services sector — the companies that provide crews, equipment and logistical support — had shed more than 100,000 jobs as of last August, based on data from the Petroleum Equipment and Services Association. The sector has since added back about 21,000 jobs, according to the trade group, but it’s unclear whether employment will fully recover.

Meanwhile, the offshore wind industry is poised to spend hundreds of billions of dollars in the next 10 years to install a new generation of turbines around the world. That is expected to create a need for warehouses and storage yards onshore, specialized ships to install the turbines, and fleets of tugs and barges to ferry crews and equipment.

To meet the goals of the Paris Agreement, the world’s energy companies will need to increase the amount of offshore wind generation fourfold, and investment will have to more than triple, from $18.9 billion in 2018 to $61 billion annually through 2030, according to the International Renewable Energy Agency. Whether that occurs is an open question, as projects currently in the pipeline face local obstacles and permitting bottlenecks (Energywire, Jan. 29).

So far, most of the world’s offshore wind has been installed in Europe.

But the U.S. industry could get a boost from the Biden administration, which has said it wants to decarbonize the U.S. electric grid by 2035 as a way to combat climate change. And major oil companies, including BP PLC and Royal Dutch Shell PLC, have promised to invest heavily in wind and other forms of renewable power as a way to reduce their climate-warming emissions.

BP and the Norwegian oil company Equinor ASA are planning three wind projects off the coast of New York, and as many as a dozen projects are being considered in federal waters off the East Coast.

Jones Act and a ‘tipping point’

Crowley’s new energy division will work on a variety of projects, including liquefied natural gas, solar and carbon capture. But in the United States, Crowley and other companies expect to see a rush of business as wind developers aim to build the storage yards, docks and other facilities they’ll need.

"Renewables has now reached a sort of tipping point that it will just grow and grow and grow," said Ben Hooker, director of business development for the offshore firm Oceaneering International Inc.

Oceaneering does undersea surveys, site preparation and construction for oil companies, and Hooker said the company plans to do the same kind of work for offshore wind projects.

To be sure, the oil industry still dwarfs the renewable market. But wind turbines and other projects represent steadier work because they’re frequently backed by tax incentives and other government subsidies, said Søren Lassen, an analyst at the consulting firm Wood Mackenzie.

"Over the next five years, you have a lot of clarity about how much you need to build and when," Lassen said. "You don’t have the same certainty in oil and gas."

The sector is attractive to companies like Crowley and Oceaneering because it allows them to use existing equipment and vessels that might otherwise sit idle during oil industry downturns. It also has high barriers to entry that could limit the number of new players.

That will give Crowley an opportunity to bid for work shipping parts and equipment between the U.S. coast and offshore wind farms, Andreini said.

Other companies are going further: NOV Inc., a 150-year-old oil field company based in Houston that was formerly known as National Oilwell Varco, is working with utility giant Dominion Energy Inc. to design and build the first installation ship that can comply with the Jones Act, according to a December news release.

The 472-foot ship will be able to carry 11,500 tons of cargo — the equivalent of 5,000 pickup trucks — and will have a crane that can hoist a 2,200-ton turbine into position. Dominion plans to base the ship in Virginia and use it to build a 180-turbine wind farm 27 miles off the coast.

The service companies also see business potential in the second phase of wind development. Once construction is completed, wind farms are expected to require periodic maintenance over about 25 years.

The operating and maintenance revenue could hit $4 billion a year, Crowley’s Andreini said, and would require much of the same services and equipment as initial construction.

There could be another round of investment coming as oil companies and other wind developers push for lower emissions from the vessels and contractors that they hire for the work. That could lead the service companies to develop hybrid-powered ships or ships powered by fuel cells or other new energy sources, said Hooker at Oceaneering.

"When it comes to investment, I think we’re in a really, really good position," he said.