How the oil industry learned to love Massachusetts v. EPA 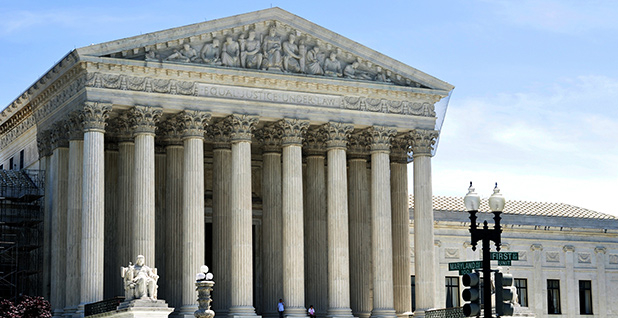 Legal challenges over climate rules could lead to a major fight in the Supreme Court. Pete Jordan/Flickr

Retiring Justice Anthony Kennedy was the key vote in the 5-4 ruling in Massachusetts v. EPA, which gave EPA power to police greenhouse gas emissions and set the stage for Obama-era policies to limit climate change.

The Competitive Enterprise Institute (CEI) and other conservative groups hope the Supreme Court might reconsider the case when Kennedy’s replacement is on the bench. At least two conservative justices — Samuel Alito and Clarence Thomas — have called for it to be overturned.

But Massachusetts serves as the linchpin for a high court precedent embraced by oil companies as they fight climate lawsuits from cities and counties.

In American Electric Power Co. v. Connecticut, the Supreme Court ruled in 2011 that corporations cannot be sued for greenhouse gas emissions because EPA regulates those through the Clean Air Act — power that came through Massachusetts.

The municipalities’ suits largely contend that production and sale of fossil fuels create a public nuisance. Oil companies have said that’s a legal bid to get around AEP v. Connecticut. When it comes to greenhouse gas pollution, they argue, the case knocks out the ability to sue for nuisance under federal law.

"If the Massachusetts case were overturned, then that defense would be gone," said Michael Gerrard, faculty director at Columbia University’s Sabin Center for Climate Change Law. "American Electric Power v. Connecticut said that in view of Massachusetts, there’s no remaining role for federal common law nuisance cases on climate change, that that is exclusively EPA’s job.

"So if the job is taken away from EPA, then the plaintiffs in these mostly California cases will say, ‘OK, the displacement is gone. It’s now back to the federal courts,’" he said.

Multiple cities and counties in California have filed climate-related lawsuits against oil companies and trade groups that include Chevron, BP PLC, ConocoPhillips, Exxon Mobil, Royal Dutch Shell PLC and API. There’s also a case in King County, Wash., and another in New York City. The city of Boulder and the counties of San Miguel and Boulder in Colorado have sued Suncor Energy Inc. and Exxon Mobil. The cases seek to make oil companies pay damages for sea-level rise and other impacts.

Judge William Alsup in the U.S. District Court for the Northern District of California last month threw out lawsuits from San Francisco and Oakland. His decision said assessing blame for climate change is a political issue and not one for the courts, although his ruling noted the oil company’s arguments about AEP v. Connecticut. Those cities are debating whether to appeal.

The 9th U.S. Circuit Court of Appeals in California, meanwhile, is considering whether to take up cases from more than two dozen fossil fuel companies and trade associations sued by Imperial Beach, San Mateo, Marin County, Richmond, Santa Cruz and Santa Cruz County in California. District Judge Vince Chhabria earlier this year ruled that those cases belonged in state court, where they started. The oil interests appealed that decision.

Myron Ebell, a senior fellow at CEI, said yanking back authority from EPA is a top goal. The suits against oil companies are a lower priority, he said.

"The most important thing to do is to remove the federal government’s authority to regulate greenhouse gas emissions," Ebell said. "If that has the effect of allowing these common law nuisance suits to get into court, that’s something that we’re very concerned with, but we think it’s a much smaller and less worrying threat than a federal agency like EPA regulating greenhouse gas emissions."

If the lawsuits against oil companies became a major issue, Ebell said, Congress could step in and "and make those suits go away by saying, ‘No, there is no such thing as a harm by a ubiquitous, naturally occurring gas.’"

Kavanaugh ‘in the mold of’ Justice Scalia

Ebell stipulated that it could be tough to get the high court to look at Massachusetts, especially in the short term.

But President Trump’s Supreme Court nominee, Judge Brett Kavanaugh of the U.S. Court of Appeals for the District of Columbia Circuit, is "in the mold of" the late Justice Antonin Scalia, in terms of "taking the separation of powers very seriously," said Andrew Grossman, a partner at BakerHostetler and an adjunct scholar at the libertarian Cato Institute.

"It’s important that agencies act within their statutory and constitutional authority," Grossman said. "The difficulty, of course, is drawing the lines as to where that authority ends, as well as determining who makes those judgment calls about the extent of an agency’s authority."

But Grossman said he doubts the Supreme Court with a new justice would reverse Massachusetts.

The Trump administration is not questioning the key holding of Massachusetts, that the agency can regulate greenhouse gas emissions, he said, "so it is unlikely that you would have any type of agency action that would lead to litigation that would throw that holding into question."

EPA would need to take an action such as moving to throw out the Obama EPA’s endangerment finding for greenhouse gases, which determined that they pose a threat to human health. Or if Trump’s EPA decided to toss vehicle emissions regulations instead of rewriting those, "that would throw into doubt Massachusetts v. EPA," Grossman said.

"Then you’d have litigation over it," he said.

Sean Hecht, co-executive director of the UCLA School of Law’s Emmett Institute on Climate Change and the Environment, agreed with Gerrard that the high court reversing Massachusetts would affect oil companies in the municipalities’ suits.

The argument that AEP removes the ability to sue for nuisance in federal court, he said, "will most likely evaporate."

That might be a reason that some conservative and libertarian groups "might prefer not to attack" the Massachusetts ruling, Hecht said.

However, he said, they might also be looking longer-term, and "they might be expecting that at some point in the future there might be a more aggressive regulation, which would be an argument on their end for trying to take away EPA authority."

"There would be a number of other arguments they would make," Hecht said.

Hecht noted that if cases are allowed to return to state court, the nuisance issue is treated differently. It’s much easier to prove nuisance in California, for example, than under federal law because of the AEP v. Connecticut precedent.