How the pandemic upended climate politics 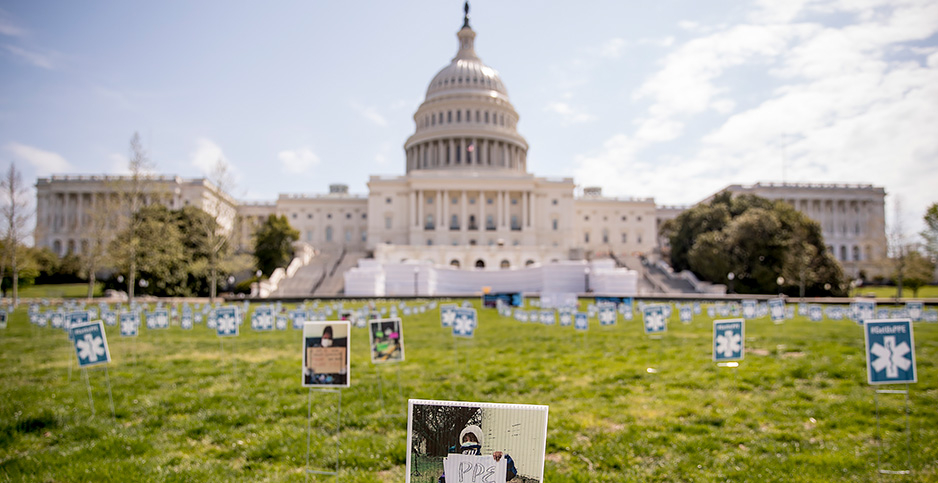 The COVID-19 pandemic, and the chaotic and expensive congressional response, has upended the climate politics landscape.

Before the onslaught of the coronavirus, environmentalists had unprecedented success getting the issue into the mainstream, bringing it to the forefront of the 2020 election and, potentially, the policy agenda of a new Democratic government come 2021.

But those successes are in question with Americans stuck at home and the economy in free fall, with full recovery likely a distant prospect.

In the near term, it might simply be harder to keep climate on the political map, environmentalists and academics said, even as the broader recovery effort offers new opportunities to remake the American energy system.

"We have limited attention spans. We obviously can only deal with one crisis at a time, and it’s probably true that in the short term, we’re going to be dealing with very, very high unemployment and massive economic dislocations," said Brett Hartl, government affairs director at the Center for Biological Diversity. "And that often sucks a lot of the oxygen out of the room."

It was difficult for progressive activists to get the Obama administration to focus on climate in 2010 amid the response to the last recession, Hartl said. And attempts to regulate or price greenhouse gas emissions wallowed in irrelevancy for years after the Waxman-Markey bill stalled in the Senate in 2009.

"There’s no question that in 2009 and 2010, the weak economy undermined attempts at carbon pricing," said Paul Bledsoe, a former climate adviser in the Clinton White House. "And I think that any attempt at carbon pricing has to wait to be initiated until the economy recovers."

That dynamic was borne out among voters in the Democratic primaries just after the pandemic’s onset earlier this year.

"It will be very difficult to push the climate agenda, given that people are so concerned about one public health and two the economy, and just how many extreme numbers of people are out of work at this point," said Sanya Carley, an energy policy expert at Indiana University.

That may mean climate activists have to reframe their message to focus more on using clean energy to revive the economy, and climate policy to grapple with the socioeconomic injustices highlighted by the pandemic, Carley said.

Low income and communities of color that often bear the brunt of air pollution and extreme temperatures are among the hardest hit by the coronavirus.

Still, environmentalists point to the fact that the effects of climate change, from drought to more intense hurricanes, are more and more of an immediate challenge.

"That attention to climate isn’t going away, even in difficult economic times, and that is because the impacts of climate change are at everybody’s doorstep — droughts, fire, flooding, intense weather," said Melinda Pierce, legislative director for the Sierra Club. "Even folks in the big, red square states are seeing the impacts of climate change on their front door."

On Capitol Hill, the pandemic could threaten the fragile politics of environmental regulation and the Republican Party’s rapidly changing climate beliefs.

After getting swept out of suburban districts in the 2018 midterms, the GOP has increasingly acknowledged climate change in response to polling that shows it’s important to moderate voters.

That culminated earlier this year with House Minority Leader Kevin McCarthy (R-Calif.) and his top deputies rolling out a series of bills aimed at reducing greenhouse gas emissions through innovation and carbon sequestration (E&E Daily, Feb. 13).

Although Republicans are far from embracing new regulations or carbon pricing, there was an emerging consensus in Washington that technological innovation is important and on the state level that renewable portfolio standards can be an effective policy, said Sasha Mackler, director of the Bipartisan Policy Center’s Energy Project.

"I think we were on track for actually making some interesting and meaningful climate policy progress over the course of the coming few years if we had not hit the speed bump of the pandemic," Mackler said.

"We’re no longer going to be talking about mandates, particularly from an emissions standpoint, or increasing prices from a tax standpoint in the near term," Mackler said. "That’s not going to be the framework now."

It’s clear in the early stages of congressional pandemic relief that Republicans are not willing to put climate policy on the table or to let Democrats remake a new, lower emissions economy once the crisis is over.

The GOP weaponized the Green New Deal to resist any targeted aid, namely tweaks to renewable tax credits, to the clean energy industry in the third $2 trillion aid bill that passed at the end of last month.

Talks on clean energy and infrastructure have since petered out, with Democrats focused largely on health care and unemployment and some top Republicans resisting another massive government spending bill.

Rep. Garret Graves (R-La.), ranking member of the Select Committee on the Climate Crisis, said he’s skeptical of any policy that could raise energy prices in a recession, even with oil prices at the lowest they’ve been in decades.

The fact that House Speaker Nancy Pelosi (D-Calif.) has backed away from clean energy as a priority in stimulus talks over the last few weeks "is indicative of where the politics are on these issues" post-pandemic, Graves said.

"I think people are going to be more focused on the fundamental needs that they have first," Graves said.

For climate advocates, the idea that economic concerns will trump environmental issues evokes memories of the last recession, which some credit with bringing climate change denial into the Republican mainstream and sucking away Democrats’ political capital on climate.

For the GOP, the 2008 financial crisis marked the dawn of what former Rep. Bob Inglis (R-S.C.) termed "the decade of disastrous disputation."

In 2008, the late Arizona Sen. John McCain proposed a cap-and-trade system to tackle climate change as part of his Republican bid for the presidency. The GOP platform that year included an entire section dedicated to addressing man-made climate change through market-based solutions.

But the 2010 tea party wave helped kick moderates like Inglis out of Congress, and by 2012, the Republican Party’s platform included scant mention of climate change — except to criticize President Obama for emphasizing it in his National Security Strategy.

The same trend was borne out among regular Americans as everyday economic concerns became more pressing and the tea party took power. Polling from Gallup found in 2010 that roughly half of Americans thought the seriousness of climate change is "generally exaggerated," up 15 points from 2007 (Climatewire, April 2).

Inglis, who now runs republicEn, argued that this time is different, with a new advocacy scene on the right and the lessons of the 2018 midterms fresh at hand.

The effect that the pandemic will have on climate opinion among voters is still an unknown, said Barry Rabe, a professor of public policy at the University of Michigan, but it does create an unusual political moment when everyone is listening to scientists and certain political leaders.

Dr. Anthony Fauci, for instance, has become one of the nation’s authoritative voices on the crisis and, in his own right, a meme. Meanwhile, New York Gov. Andrew Cuomo (D) has seen his approval ratings soar to near 90% in some polls, as his daily COVID-19 press conferences have become must-watch national TV.

That may offer an opportunity for scientists and political leaders on climate to reenter the national conversation, Rabe said.

"I don’t think that this necessarily takes this issue off the agenda in coming years, especially once we begin to transition and think about what a post-COVID-19 society is going to look like," he said.

Indeed, environmentalists and the clean energy industry are hoping that congressional action on COVID-19 in the coming months offers opportunities on climate, just as the 2009 stimulus did in the early days of the Obama administration.

The American Recovery and Reinvestment Act of 2009 was widely seen, in part, as the biggest clean energy bill ever, and the current crisis offers a similar opportunity, particularly on infrastructure, Bledsoe said.

A COVID-19 relief package could also be a chance for major oil and gas firms to make good on their pledges to lower emissions, given that "they’re sitting on a mountain of cash," he added.

"This could be the opportunity for the majors to make huge investments in alternatives like biofuels, like hydrogen fuel cells, like carbon capture and many others that, frankly, may be a lot better long-term bet than pumping out more oil at this point," Bledsoe said.

Plus, for progressives, the third COVID-19 relief package, the largest emergency spending bill in American history, shows that Congress can respond to a crisis when it wants to without fears about the budget deficit.

"I do think that this crisis shows that we can take bold action, spend trillions when we want to," Hartl said. "It’s just a question of when we want to because the money magically appears when it’s demanded, so that actually bodes well for dealing with the climate crisis."

In a sense, it’s a road map for getting Congress to spend trillions of dollars, said Rep. Kathy Castor (D-Fla.), chairwoman of the Select Committee on the Climate Crisis.

"While it hasn’t really altered my thinking, I think it’s altered other people’s outlook," Castor said in an interview. "And if one silver lining can be seen through all of this, it’s the fact that we can work together and mobilize to confront a threat to our way of life in America and all across the globe."

While Graves largely rejected the idea of moving aggressively on climate in future stimulus packages, he said he sees opportunities, too.

It’s a chance to revamp the country’s supply chain for the critical minerals that are used in high-tech devices and renewable energy, Graves said, and extensions and additions to various clean energy tax credits could have a role as long as Congress isn’t "forcing things that don’t fit."

"This is sort of a reset opportunity," Graves said.

Longer term, most experts and advocates say the federal government will need to use regulations or tax policy to limit greenhouse gas emissions and stop climate change, but it remains to be seen whether the public’s focus will return.

"In an economy that’s been whacked by the coronavirus, do we have emotional and financial bandwidth to think about climate change?" Inglis said. "It’s an open question. I can’t tell you it’s going to be real easy."