How the Russia crisis hits energy, from CO2 to pipelines 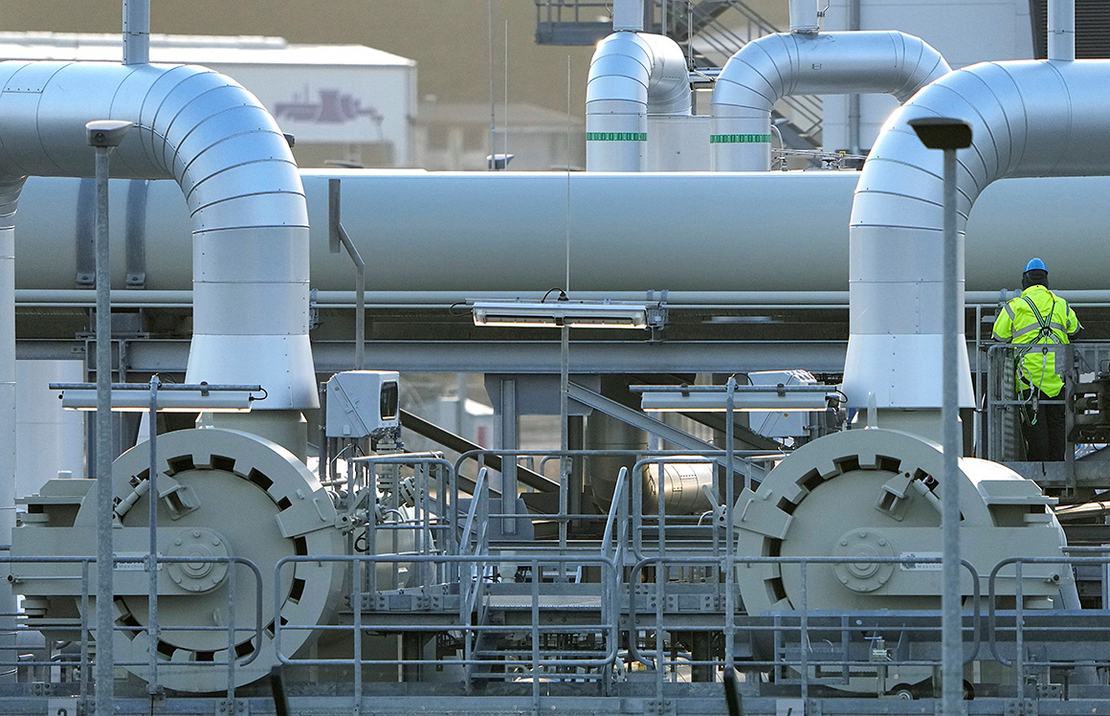 Pipes at facilities associated with the Nord Stream 2 gas pipeline are pictured in Germany this month. AP Photo/Michael Sohn, File

President Biden moved yesterday to penalize Russia for the beginning of an “invasion of Ukraine,” even as he stressed that he wanted to avoid driving up energy costs in Europe and the U.S.

Russia derives a large part of its income by exporting oil and gas, so blocking the country’s exports is an obvious target for economic sanctions, analysts said. But Biden said at the White House that his plan would block transactions by two Russian banks and prevent Russia from selling its sovereign debt on U.S. and European markets. Russian “elites” and their family members will also face unspecified sanctions, he said.

The announcement came the same day German officials said they wouldn’t certify the start up of the Nord Stream 2 pipeline that’s designed to carry gas from Russia to Western Europe.

The administration acknowledged that hitting Russian President Vladimir Putin’s financial infrastructure would have economic consequences both for drivers in the U.S. and for European nations that rely on Russian natural gas for heat and industrial use.

“I want to limit the pain that the American people are feeling at the gas pump,” Biden said.

Yet the degree that the Russian crisis may ripple across the U.S. energy sector and stress Biden’s climate agenda are unclear, despite a push by U.S. industry to increase natural gas exports. In Europe, some analysts say the pause of Nord Stream 2 could double natural gas prices at a time when consumers are already struggling.

The crisis in the Ukraine escalated on Monday when Putin recognized the independence of two breakaway regions of the Eastern European country and said he would send troops there as “peacekeepers” (Greenwire, Feb. 22).

Viewed by many as an initial step toward Russia invading Ukraine, that move also sent global energy prices soaring at a time when Americans are already paying more for electricity, home heating and gasoline than they were last year.

Russia is the third-biggest oil producer after the U.S. and Saudi Arabia, and it supplies about 35 percent of Europe’s gas. European consumers have already dealt with a spike in gas prices in December, after Russia slowed some of its exports (Energywire, Dec. 15, 2021).

International oil prices briefly rose above $100 yesterday, and U.S. gasoline prices are averaging $3.53 a gallon, 90 cents more than a year ago, according to AAA. The price crunch is even higher in Europe, where natural gas at one of the main delivery hubs in Holland sells for about six times the U.S. price.

So far, Russia hasn’t made a move to seriously restrict its oil or gas sales to Europe — perhaps because Russia needs the income, said Andy Lipow, president of Lipow Oil Associates LLC.

“There is a symbiotic relationship between Russia selling to Europe and Europe buying from Russia,” he said.

Nord Stream 2 is “an $11 billion investment in a prized gas pipeline controlled by Russia that will now go to waste, and it sacrifices what would have been a cash cow for Russia’s coffers,” said Daleep Singh, a deputy national security adviser, at the White House press briefing.

“But it’s not just about the money,” Singh said, adding, “This decision will relieve Russia’s geostrategic chokehold over Europe through its supply of gas, and it’s a major turning point in the world’s energy independence from Russia.”

The decision to pause Nord Stream 2 has led to renewed calls from the U.S. liquefied natural gas industry to increase gas exports to Europe, underscoring a source of political tension for the Biden administration as it pushes to decarbonize the energy sector and reduce emissions from fossil fuels.

Liquefied natural gas producers are working with the Biden administration to bring as much gas to Europe “as we possibly can,” said Charlie Riedl, executive director of the Center for Liquefied Natural Gas. In December, 60 percent of LNG cargoes from the U.S. went to Europe, while 70 percent went to the region in January, he said.

“I would expect that number would be at least that again in February,” Riedl said.

The administration should also emphasize that gas will “continue to be important,” added Richard Morningstar, founding chairman of the Global Energy Center at the Atlantic Council. He called the export of natural gas “critical right now from the standpoint of national security, energy security and mitigating a threat of dependence on Russian gas.”

But the high prices already have enticed U.S. companies to export as much LNG as they can to European buyers. They’re limited by the number of export terminals, and it’s still far cheaper to move gas across the continent by pipeline, Anne-Sophie Corbeau, a Paris-based scholar for Columbia University’s Center on Global Energy Policy said.

“It’s very difficult to see how Europe could ever replace Russian gas,” she said.

In addition, some climate advocates view natural gas exports broadly as incompatible with the White House’s efforts to address climate change and advance environmental justice. New LNG export terminals on the Gulf Coast, for example, have been met with resistance from local communities in some cases.

“[The administration’s] refusal to acknowledge the climate and economic impacts of the unprecedented levels of fossil fuel exports coming out of the U.S. hinders their ability to effectively manage the climate crisis, period,” said Tyson Slocum, director of the energy program at Public Citizen.

European climate groups are also skeptical of gas imports. To achieve its climate targets, the region must reduce its dependence on “expensive imported gas” and invest in renewable energy instead, Charles Moore, Europe lead at the London-based climate and energy think tank Ember, said in a statement.

Still, natural gas prices in Europe are expected to soar as a result of the developments with Nord Stream 2, said Marina Henke, an associate professor of political science at Northwestern University and director of the Centre for International Security at the Hertie School in Berlin.

Russia’s aggression in Ukraine may ultimately help speed up Germany’s so-called green revolution, as the government sees the situation as an opportunity in the long term to continue investing more in solar and wind projects, Henke said. Still, more imported gas from the U.S. has and will continue to be helpful for keeping energy reliable, Henke said.

“If you look very closely, solar and wind cannot substitute gas at any time soon,” Henke said. “In one form or another, we need to have gas for a while. And then the big question is, where does this gas come from?”

“Most immediately at risk are … Russian oil exports transiting Ukraine via the southern branch of the Druzhba pipeline to supply Hungary, Slovakia and the Czech Republic,” IEA said.

As the White House continues to respond to the threat from Russia, the administration is also using “every tool” available to protect Americans from the rising cost of oil, Biden said yesterday. That includes working with oil producers to help ensure the stability of global energy supplies, he added.

“We can be very clear that if President Putin weaponizes energy supply, it will be met with massive consequences, and will only accelerate the diversification of Europe and the world away from Russian energy,” Singh told reporters.

Even so, “defending freedom” won’t be free, Biden said.

“[As] we do this, I’m going to take robust action to make sure the pain of our sanctions is targeted at the Russian economy, not ours,” the president said.

How much pain Americans feel at home is an open question. Although natural gas prices remain high, potential impacts on Americans’ electricity and home heating bills may be muted by the fact that the winter season is coming to a close, said Mark Wolfe, executive director of the National Energy Assistance Directors Association.

Still, low-income people — who are as less likely to work from home than those with higher-paying jobs — could be hit particularly hard by rising gasoline prices, Wolfe said. Inflation has already increased prices for other essential goods, such as food and housing, he noted.

“There’s a lot that’s still unknown. So for ordinary families, how do you plan for this? You have to drive to work,” Wolfe said.

The situation in Europe also poses a new challenge for Biden’s clean agenda. The unfolding crisis is demanding the president’s attention as his domestic legislative agenda remains “somewhat stalled,” said Barry Rabe, an environmental policy professor at the University of Michigan. In that context, it makes sense that Biden used a foreign policy speech to emphasize the “pocketbook issue” of gasoline prices.

“It does raise the question of how far he’s going to be able to go — at least over the next year or two — on some of the climate and energy issues, especially given that international focus and especially given this new absorption … with trying to keep relatively low cost in everybody’s tank,” Rabe said.

High energy prices are likely to last for months, said Ben Cahill, a senior fellow at the Center for Strategic and International Studies. Normally, rising oil prices would coax more production out of the Middle East and the U.S. shale-drilling industry, but that hasn’t happened yet, and it’s having an impact around the world.

“We have a huge problem of inflation in the U.S. — energy prices are elevated across the board,” he said. “There doesn’t appear to be a solution to this in the near term.”