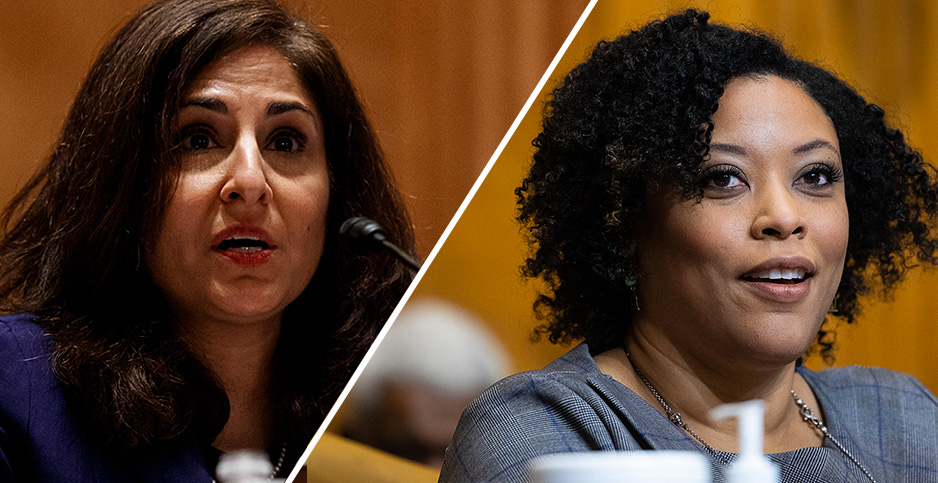 But people who keep track of the Office of Management and Budget don’t see lasting damage from the delay in securing a director.

And Biden has made a point of filling top political posts that do not require Senate confirmation across the federal government, including at OMB.

Still, lack of Senate-confirmed leadership, to a degree, thwarts a president’s policy priorities at a time when Biden seeks to offer a reprieve to Americans suffering from a yearlong pandemic.

And the Biden team was already starting at a disadvantage because the Trump OMB refused to cooperate with the incoming administration — an issue White House press secretary Jen Psaki has referred to as "intransigence" from Trump officials.

During the transition, Trump OMB Director Russ Vought argued it was not his job to help Biden pursue a new administration’s priorities. And as former President Trump refused to accept his loss, Vought directed his staff to keep working on a fiscal 2022 budget.

But in the several weeks since taking over, the Biden OMB team has fared just fine, said Gordon Adams, a former OMB appointee. "The ship got steered pretty well in [a director’s] absence," he said.

OMB is sending guidance to agencies with top-line budget figures, said Adams. The process has been hashed out among high-ranking Biden officials, including domestic policy adviser Brian Deese, who used to serve at OMB, and Aviva Aron-Dine, a current OMB appointee.

"The process of getting those options defined has been pretty smooth, as it’s been described to me," Adams said. "It’s all being done in the Oval Office anyway."

The White House is planning to send out two-page budget drafts by the end of the month, he said, and the full budget by early May.

Heidi King, a former OMB Office of Information and Regulatory Affairs official who worked on the Trump clean car rollback, doubted the Tanden fallout would create much real havoc on the budget.

She noted career staffers are used to stepping up in acting roles, and many Biden officials have considerable government experience.

In addition, a vacant OMB director position is less significant than a vacant agency head, she said. At the agencies, King explained, "a temporary leader might not have the opportunity to align with the White House to make decisions or the expertise to skillfully direct execution of vague direction from Congress."

OMB this budget cycle was always going to be difficult for several reasons. One is the sharp contrast in priorities from Trump to Biden. A second is the pandemic’s impact on traditional work; much of the process has happened remotely.

"I believe the process is unlikely to be delayed by lack of a confirmed director but rather just because it’s extra-hard this time around," she said.

And as the Partnership for Public Service points out, Biden is not alone: Five previous presidents faced a confirmation failure early in their tenure.

In this case, the group wrote, the "failed nominations represent a temporary setback for the administration" and "unleash political jockeying among those promoting replacement candidates."

To that end, speculation abounds about whom Biden will select to replace Tanden. His deputy director pick — Shalanda Young — has received overwhelming praise from many members of Congress, where she has worked in high-ranking staff roles for more than a decade.

When asked in recent days, Psaki said a new OMB nominee would not be announced this week. In the meantime, she noted, Young, if confirmed, would serve as the acting director.