How the virus could help promote carbon taxes 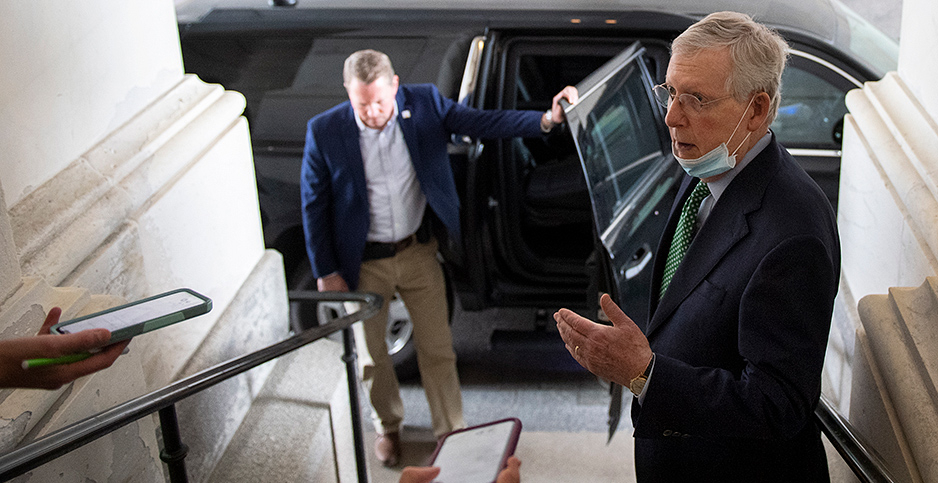 Supporters of taxing carbon believe they’re on the cusp of a comeback.

The coronavirus pandemic is likely to usher in an era of debt and belt-tightening, multiplying the difficulties in passing expensive climate legislation, like the Green New Deal.

That could favor climate policies that are designed to raise tax revenue at a time when trillions of dollars are being spent by Congress to stymie the economic fallout from the pandemic, according to several policy analysts who support pricing carbon dioxide emissions.

"The scale of spending that we’re seeing is going to provoke political backlash at some time," said Joseph Majkut, director of climate policy at the Niskanen Center, a libertarian think tank that advocates for taxing carbon.

The repercussions for the federal deficit are already coming into focus. The Congressional Budget Office last month revised its pre-virus projection for the 2020 deficit from $1.1 trillion to a record $3.7 trillion — with federal debt exceeding GDP for the first time since World War II. The national debt, meanwhile, stands at a record $24.6 trillion and climbing.

During the long economic boom that the shutdown abruptly ended, policymakers seemed to be coalescing around climate proposals that spent public money on low-carbon investment, introduced regulation, or both.

Carbon pricing — long the centerpiece of any serious response to climate change — seemed to be out of fashion. But now its backers say it’s poised for a comeback as lawmakers search for a way to move the needle on climate change without ballooning the deficit.

"Subsidies on the scale of the Green New Deal never stood a chance," said Alex Flint, a former Republican congressional staffer who is now executive director of the Alliance for Market Solutions, a think tank that supports taxing carbon. "Our economic outlook forces us to address climate change in the most economically efficient manner possible."

Flint said the stars might finally align for a carbon tax in the middle of this decade, when scientific warnings about the need for emissions reductions coincide with a Congress grappling with how to pay not only for the coronavirus response but for budget stressors like entitlement spending and tax cuts enacted in 2017.

Added Majkut: "I would not be surprised at all if a few years from now there’s a real conversation around, how are we going to restore fiscal balance?"

Aside from offering a chance to reduce emissions without increasing public spending or regulation, he said, a carbon tax can also pay for tax cuts for labor and capital, spurring economic growth. Majkut said he was currently exploring how a small carbon tax applied in the near future could serve as a price signal for post-pandemic investment.

Decisions for a future president

The pandemic has plunged economies around the world into turmoil, and many countries are looking for ways to boost sustainability as they recover. The governments of China, the United Kingdom and Germany last week made a joint call for aligning post-pandemic stimulus with the Paris Agreement.

"[It] will be the duty of every responsible government to see that our economies are revived and rebuilt in a way that will stand the test of time," said U.K. Prime Minister Boris Johnson in remarks to a virtual meeting of the Petersburg Climate Dialogue on Tuesday, days after returning to work after his own bout with the virus. "That means investing in industries and infrastructure that can turn the tide on climate change."

In the U.S., House Democrats have raised "green stimulus" ideas, together with prioritizing support for states and municipalities and for remote voting ahead of the November election.

That comes as some leading Republicans have gestured toward fiscal conservatism. Senate Majority Leader Mitch McConnell said last week that the nation’s debt is "a matter of genuine concern" and suggested that Congress take a break before negotiating another pandemic spending package.

Critics note the Kentucky Republican showed no such scruples about the impact that the 2017 tax cuts had on deficits. And they predict that partisan divides over spending in general — and green spending in particular — will deepen if former Vice President Joe Biden defeats Trump this November.

"We’ve seen that the Republicans’ concerns about deficits are much more acute when a Democrat is in the White House," said Jacob Leibenluft, a senior fellow at the Center for American Progress and former deputy director of the White House National Economic Council under President Obama.

"There’s no question that concerns about the deficit have been used in the past, and I anticipate it will be used in the future, as an argument against doing necessary spending — whether it’s to get out of a recession or whether it’s to invest in things we need, like addressing climate change," he said.

Austerity can grow deficits, Leibenluft said, if it means forgoing necessary investments or letting the economy suffer. The CBO’s projected deficit growth is not only from spending but from lost tax revenue as a result of economic chaos and rising unemployment, he noted.

Bill Hoagland, who served as budget director for former Senate Majority Leader Bill Frist (R-Tenn.) and is now a senior vice president at the Bipartisan Policy Center, expressed regret that a 2010 budget deal between Obama and congressional Republicans billed as controlling the deficit squeezed science, education and public health investments. He said that harmed "the seed corn of the future."

"Those are the programs that, if anything, for the long-term growth of this country, we should have been investing in, not cutting or even restraining their growth," Hoagland said, noting that entitlement spending and defense budgets were largely unaffected by the sequester.

Hoagland said future Congresses and administrations would be forced to grapple with the size of the debt or risk an eventual crisis in which borrowing becomes ruinously expensive.

Biden’s tenure in the Senate, which overlapped with Hoagland’s, showed that he cared about limiting debt, unlike Trump who "built his career on debt, if anything," Hoagland said.

He predicted tough decisions for the next president.

"I’d hate to be his OMB director, that’s all I’m going to say," Hoagland said.