How to drop a wetland conviction: Court says intent matters 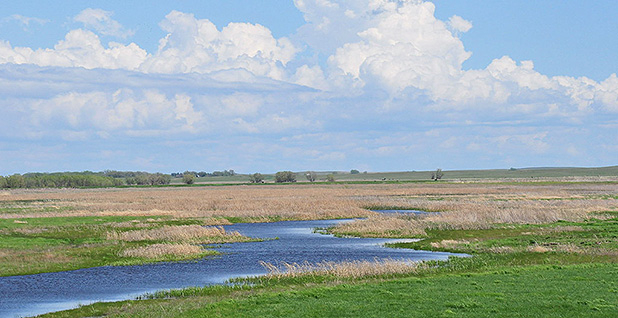 An appeals court threw out the conviction of a South Dakota farmer charged with disturbing federal property, including part of the Sand Lake National Wildlife Refuge, pictured. Tom Koerner/USFWS/Flickr

In a ruling that could handcuff some environmental prosecutors, an appeals court yesterday threw out the conviction of a South Dakota farmer charged with disturbing property within the National Wildlife Refuge System.

While farmer Kevin Jay Mast laid irrigation drainage tiles on land covered by a federal wetlands-protecting easement, the 8th U.S. Circuit Court of Appeals ruled that his state of mind should have been taken into account.

"Unless Mast knew or should have known that carrying out a drainage project on his own land would disturb [National Wildlife Refuge System] property, his conduct was innocent," Judge Jane Kelly wrote.

The 2-1 decision by the appeals court panel rejected the government’s argument that strict liability applied to the federal statute.

Strict liability is an unforgiving standard, as guilt hinges simply on whether an act was committed.

Kelly, an Obama administration appointee, reasoned that the statute Mast was convicted of violating "requires proof of the defendant’s negligence." Though the government had evidence of that, Kelly said the trial judge erroneously instructed jurors that strict liability applied.

"Our system of law acknowledges the ‘universal,’ ‘persistent’ principle that wrongdoing must be conscious to be criminal," Kelly wrote.

Consequently, Kelly added, "courts generally interpret criminal statutes to require, at a minimum, proof that the defendant knew the facts that make his conduct fit the definition of the offense, even when the statute does not explicitly include such a requirement."

Judge Steven Colloton dissented, noting that "the Supreme Court, for example, long ago held constitutional a statute making it a felony offense to cut timber on state lands without a permit, despite the absence of a [state-of-mind] element."

Now in his early 60s, Mast in 2010 came up with a plan to install tiles to drain water from certain areas of his property in Brookings County, S.D.

The Natural Resources Conservation Service advised him that the property was subject to an easement that the Fish and Wildlife Service had acquired from a previous property owner. The two federal agencies subsequently sent him two different maps to guide his work.

"He put in tens of thousands of dollars on this tile," defense attorney Gary Leistico said at an April 2018 sentencing hearing, a transcript shows. "I think he thought it was approved. He ended up being wrong."

Assistant U.S. Attorney Jeffrey Clapper said at the same hearing that "this was a very important matter to the Fish and Wildlife Service" and noted that "we have six distinct wetland areas on this property that were all affected by the installation of drain tile."

The trial judge imposed a $100 fine and one year of probation, during which Mast was to perform restoration work at the Sand Lake National Wildlife Refuge.

"I spent a lot of time with Mr. Mast," Leistico said at the sentencing hearing. "I don’t think he meant to violate an easement or otherwise. He sincerely apologizes for the time this matter has taken."