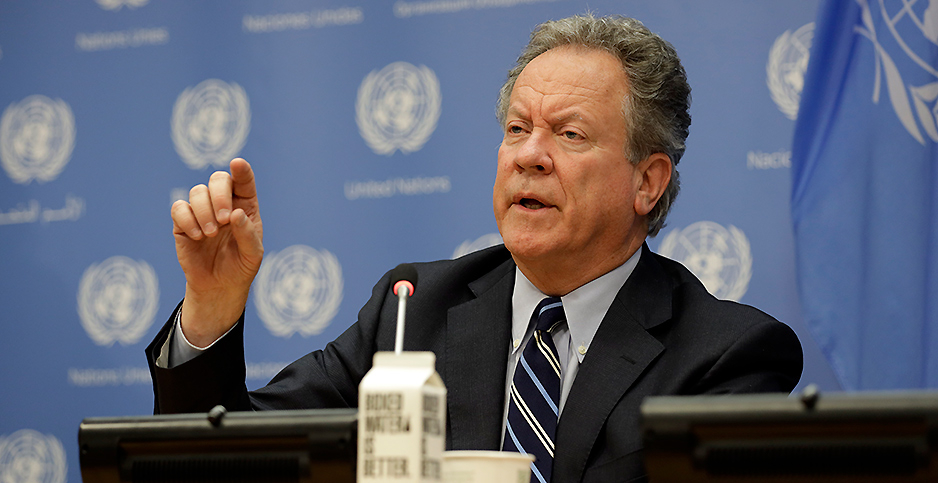 David Beasley serves as the head of the U.N. World Food Programme. The former South Carolina governor has said he has to be "very strategic" about navigating the issue of climate change when talking to the Trump administration. Li Muzi/Xinhua News Agency/Newscom

At a press conference in New York last year, David Beasley, the former Republican governor of South Carolina who now leads the United Nations World Food Programme, told reporters that he is convinced climate change is harming agriculture in Africa.

But Beasley, 63, added this important caveat. He’s careful in communicating such views to the White House and fellow Republicans on Capitol Hill.

"I try to address it in the most effective way, at the same time the last thing I want to do is get caught up in the politics," he explained. "It affects my funding dramatically in that I put millions of lives of children at stake, so I’m very strategic in how I do it. And I’ve got my own style."

The diplomatic approach seems to be serving him well. Beasley has risen to become one of the most recognized figures in the U.N. system, leading the world’s largest aid agency in its battle against drought-induced food shortages, a record locust invasion and now the COVID-19 pandemic.

Amid the outbreak, Beasley has positioned himself and the agency he runs as staunch allies of the World Health Organization. But — like his views on climate change — the stance has not harmed his standing with the Trump administration. On the contrary, while relations between Washington and WHO are at an all-time low, the U.S. government’s support for the World Food Programme remains solid.

As if to illustrate that point, Beasley earned a one-on-one meeting with Secretary of State Mike Pompeo this week on the same day Pompeo announced an additional $225 million in U.S. funding for World Food Programme operations in Yemen.

Observers familiar with Beasley’s time in office in South Carolina say his decision to stay out of politics after losing his 1998 reelection bid is paying off.

He’s emerged as a rare U.N. official capable of both maintaining a strong alliance with Washington and the broader U.N. system, including WHO, even as the Trump administration cuts U.S. funding to WHO over its handling of the coronavirus pandemic.

David Woodard, a political science professor at Clemson University, says Beasley learned how to thread this needle during his time leading South Carolina.

Sworn in as governor in 1995, Beasley oversaw a decision to remove the Confederate flag from the state Capitol building in Columbia. He subsequently lost his bid for reelection.

The extent to which the Confederate flag issue made Beasley a one-term governor is still a matter of dispute. Woodard said it was a fight over lottery poker for school funding that really cost him the reelection, but he agrees that both fights left their mark on the former governor.

"Beasley is in his position because he can handle political pressure and controversial decisions," Woodard said. "I think he will weather this storm, and he is very good at walking the tightrope."

Robert Oldendick, a professor at the University of South Carolina, Columbia, argued the flag dispute is mainly to blame for the former governor’s single term. Either way, Beasley since has made a larger name for himself at the World Food Programme, he said.

"Competent but not spectacular is the way I would characterize his tenure" as governor, Oldendick said.

Beasley was appointed to head the World Food Programme in early 2017. He achieved the posting in part due to a connection with Nikki Haley, another former South Carolina governor who served as Washington’s ambassador to the U.N. at the time of Beasley’s appointment.

Beasley has not addressed the U.S.-WHO dispute publicly. Instead, he has voiced support for both the Trump administration and the Geneva-based WHO.

The World Food Programme has earned a reputation for its formidable logistics capacity, a global reach to match any army. From a new hub in Djibouti, the World Food Programme can access the most remote and dangerous corners of the globe on short notice via pre-positioned warehouses and a fleet of cargo planes, helicopters and trucks. The agency estimates that, on average, about 100 million people receive some form of World Food Programme assistance every day.

Beasley has lent this logistics prowess to WHO for its COVID-19 response, though he has made it clear WHO is in the lead, with the much larger World Food Programme playing a support role.

The World Food Programme has introduced an additional logistics hub in Belgium linked to west Africa, as well as medical aid flights from China and Malaysia in efforts to assist WHO’s fight against the pandemic. The agency is delivering not only health care supplies and medical equipment, but also doctors and care workers, providing a critical lifeline during a time when most passenger air travel across the world has been suspended.

The fight is a personal one for Beasley — he contracted the virus in March, becoming the highest-ranked U.N. official to test positive for the disease. He since has made a full recovery.

The World Food Programme sees the fight against COVID-19 and hunger as one and the same. With food shortages in parts of Africa made worse by erratic weather, Beasley said he fears the pandemic will make the situation more dire. He has openly raised the prospect of widespread famine.

"While at the same time we are dealing with the COVID-19 pandemic, we are also on the brink of a hunger pandemic," Beasley told the U.N. Security Council in late April.

A "perfect storm" of armed conflict and "more frequent natural disasters and changing weather patterns that we are experiencing" was already setting up 2020 to be the worst year for global food security since World War II, Beasley told the council. The pandemic now compounds the multitude of problems the World Food Programme faces, he said.

Beasley estimated that some 135 million people globally were threatened with famine prior to the pandemic. He added that the COVID-19 crisis could push an additional 130 million "to the brink of starvation by the end of 2020" without assistance.

"We could be looking at famine in about three dozen countries, and in fact in 10 of these countries we already have 1 million people per country who are on the verge of starvation," Beasley told Security Council members. "I must warn you that if we don’t act now to secure access, avoid money shortfalls and disruptions to trade, we could be facing multiple famines of biblical proportions within a short few months."

Beasley has spoken openly about the threat global warming poses to food security ever since he took the helm at the World Food Programme.

On the sides of the World Economic Forum in Davos, Switzerland, in January, he spoke at length on how climate change is exacerbating food shortages. He pointed to Zimbabwe, where food and fresh water availability has taken a hit due to an extended drought punctuated by mass flooding episodes.

"Climate change, drought, flooding, we’re entering into the lean season, and this time we’re expecting the lean season to have an additional 1 million people on the brink of starvation" in Zimbabwe, Beasley reported at the time. "So they need help, they need it immediately."

He is equally outspoken about COVID-19 and the need for a coordinated international response. The World Food Programme is seeking hundreds of millions of dollars in additional funding to help pay for its pandemic work.

Woodard at Clemson University said Beasley has proved his worth to the World Food Programme.

"He learned these skills when he was governor, and because of his mistakes in office, I think he will do well in the health crisis," Woodard said. "While in the position he has garnered worldwide appreciation, so he’s earned his stripes there."

Beasley told reporters that he encourages his World Food Programme colleagues to use plain language, especially in their dealings with Washington. He sees climate change as a major threat to food security but avoids directly discussing what’s causing it — simply pointing to the facts on the ground as reported by his staff.

As a result, Beasley has managed to maintain and even strengthen the World Food Programme’s ties to the Trump administration. He fully supports U.N. Secretary-General António Guterres’ stance on climate change, backs WHO in its global pandemic response efforts and still wins support from Trump, as well as a personal audience and funding commitments from Pompeo, America’s top diplomat.

Beasley himself has argued that his style appears to be working.

"When everyone said that the Trump administration was going to zero out the U.N. World Food Programme, we were able to go from $1.9 billion to $2.5 billion," Beasley said. "I always said that if I can get the facts in front of the president, I think he would respond positively. He has and continues to do so."