How to study ancient climate? With a time machine, of course 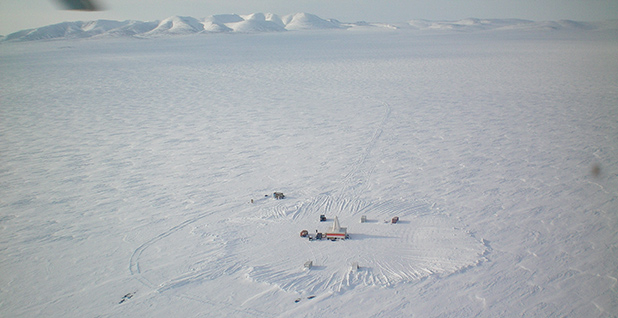 Aerial photo of the drilling platform on the artificially thickened lake ice in the center of Lake El´gygytgyn. The ice road in the back connects the platform with the camp on the western lake shore. Photo by Jens Karls, courtesy of the University of Massachusetts, Amherst.

"Those who cannot remember the past are condemned to repeat it." — George Santayana

A young American geologist, Julie Brigham-Grette, traveled to Russia in 1991 to study a question that had puzzled U.S. scientists for years. They saw accumulating geological evidence that the Arctic and the Antarctic had been much warmer in the distant past than the poles are today.

How did the poles get that way? Had rising polar heat created massive sea-level rise that affected the rest of the world? And were there growing signs that this could happen again? These questions remained as pieces of a complex, but tantalizing puzzle that lingered amid the shadows and debris of ancient history, seemingly just beyond the reach of the scientists trying to grasp them.

Then Brigham-Grette stumbled upon the possibility of creating what amounted to a powerful time machine that could shed the light of modern science backward for 3.6 million years.

Geologists are like the Time Lords of the TV’s "Doctor Who" series, as Brigham-Grette, who now heads the Department of Geosciences at the University of Massachusetts, Amherst, sometimes explains in her speeches. The work of some scientists is bounded by weather reports, which go back a few hundred years. Others’ work is constrained by the lack of useful historical records about the weather, which only began about 1,000 years ago. Analysis of tree rings can extend the weather records back a few thousand years more.

But the Earth is 4.5 billion years old, and geologists have always wanted to reach further back in time. Some of them seek riches in the form of gold deposits and oil fields formed in the distant past. Others are motivated by bigger questions, such as the one raised by the aphorism of the American-Spanish philosopher George Santayana: Are there signs of danger lurking back in ancient history that we need to understand?

Geologists have long been interested in what academics call paleoclimatology, or the study of past climates, but in the 1980s, they became more focused on man-made climate changes.

Curiosity drove some to use fossil evidence and computer-driven climate models that eventually suggested that what happened in the late Pliocene Epoch — about 3.3 million to 3 million years ago — might provide an answer.

It was the last time the Earth’s atmosphere contained 405 parts per million of carbon dioxide, which is where it has pegged again today.

The geologists’ concern is that geologic time tends to move very slowly — imagine a clock that ticks in 10,000-year increments. But the measures of sea-level rise and greenhouse gases that are expanding now are growing much more quickly. They have already shot us back to one measure of the Pliocene in the relatively tiny blink of time since the Industrial Revolution began around 1850. Is there more for us to learn about that?

Most researchers didn’t think so until Russian scientists M.I. Budyko, V.A. Zubakov and I.I. Borzenkova began writing papers about the Pliocene. They concluded that it was an analogue for the world that will emerge in the second part of this century. If the warmth of the Pliocene reoccurred, they reasoned, it might turn the vast, frozen tundra of Siberia into Russia’s equivalent of the U.S. Corn Belt.

The idea had begun to lure budding geologists to find new ways to probe the Arctic’s ancient history. One of them was Harry Dowsett, who had studied the Pliocene while earning his doctorate at Brown University and then landed a research job at the U.S. Geological Survey.

USGS was curious about the new papers from Russia and organized an exchange between experts in the late 1980s that sent Dowsett to Russia. "To be honest, I got over there and expected all sorts of technology and saw very little. We were much more advanced than what I saw from our counterparts in the field," recalled Dowsett, who is now the lead scientist on the Pliocene project at USGS, which is part of the Interior Department.

Dowsett remained in contact with the Russian scientists he had met over the next five years, but detected a lack of enthusiasm in Pliocene research as time wore on and the old Soviet regime crumbled. "They sort of fell out of it," he said. "We kept going on with our research."

The United States became the world leader in the field. Some scientists learned to use oil-drilling equipment to probe glaciers and discovered that the resulting ice cores were a kind of time machine. The ice from the depths contained trapped bubbles of ancient atmospheres that allowed measurements of accumulating CO2, which seems to be part of the answer as to why the Arctic became so warm in the past.

Unfortunately, accurate ice core measurements only go back 800,000 years. To get at the Pliocene, the scientists needed a time machine that could look at least four times more deeply into the past.

Dowsett was skeptical about finding perfect analogues, but hoped there might be "imperfect analogues" in the prehistoric past that could shed some light on the future. But paleoclimatology has never been simple. "As you learn more, unfortunately, things get more complicated," he said.

One of Dowsett’s evolving theories is that sunlight and the presence of the Arctic’s sea ice during the Pliocene have had something to do with evidence of its warmth. As sunlight, perhaps aided by CO2 trapping heat in the atmosphere, melted the ice sheet covering the Arctic Ocean, it turned more of the surface from reflective ice to darker, more absorbent open water, creating a feedback loop that accelerated the ocean’s warmth.

Under this theory, the accumulating ocean heat had no place to go because during the period, the terrain of the Bering Strait in the west and of Canada’s archipelago in the east may have been closed, blocking Arctic Ocean currents from mixing with cooler oceans to the south.

This was among the questions that first drew Brigham-Grette to Russia in the early ’90s. She wanted to learn what Russian geologists knew about the Bering Strait, and she eventually ran into a colleague who suggested that if she had questions about the Pliocene, there was a place that might have answers.

Geologist Olga Glushkova of the North-East Interdisciplinary Scientific Research Institute in Magadan, Russia, pulled out a picture of a remote Arctic lake in northeastern Russia called Lake El’gygytgyn (pronounced el-geegitgin) that was dug by a meteor strike 3.6 million years ago. Since then, an age when the Arctic was much warmer and heavily forested, the 557-foot-deep lake had remained relatively untouched. "This lake needs to be cored," Glushkova said in her broken English.

Brigham-Grette knew that in geological theory, biological debris and fossil deposits in lake sediments contained "proxies." They were tiny pieces of biological evidence that could help scientists see further back in time than the air trapped in ice cores permitted. But lakes lasting millions of years in the same place were extremely rare. In the long geologic cycles of history, lakes more often dried up or were bulldozed into oblivion by glaciers spilling their contents over thousands of miles.

She knew an opportunity to explore history when she saw one. She spent years working on science collaborations, raising $10 million, about half of it from the U.S. National Science Foundation and half from similar sources in Germany, Austria and Russia, to support drilling on the lake, which is now mainly frozen over with lake ice 10 months of the year, surrounded by tundra and 60 miles northeast of the nearest tree line.

"I spent a long time with German and Russian colleagues walking into different agencies in Moscow, St. Petersburg and Magadan to convince them that they should give us the permits for it," she recalls. Their answer, she was happy to discover, was usually yes. Many Russians were (and still are) intrigued by the possibility of new evidence pointing to times in the past when the Arctic was warmer than it is today.

For many months, it seemed to Brigham-Grette that the drilling experiment was still a "wild dream," but the expedition came together in the summer of 2008 as 17 shipping containers with all of the drilling equipment arrived in Vladivostok, Russia, from the United States and Germany.

A 3.6M-year-old meteorite tells the tale

The biggest piece was a 100-ton drilling rig designed to operate in an insulated tent so crews could function in temperatures reaching minus 58 degrees Fahrenheit. The containers were barged to a landing area and loaded on trucks.

As winter set in, a mining road over the frozen tundra became passable, allowing the trucks to move the shipping containers to within 55 miles of Lake El’gygytgyn.

From there, the trucks were pulled through snow by Russian bulldozers to the lake, which was covered with a 3-foot-thick sheet of ice. The bulldozers cleared snow from a patch of ice in the middle of the lake, but the ice was not thick enough to satisfy the Canadian ice engineers brought in to consult on the project. They drilled holes in the ice and pumped up enough water onto the ice surface to make a drilling pad that was twice as thick, reaching down almost 7 feet.

"That gave us more buoyancy," said Brigham-Grette, who had become the co-chief scientist of the project. "We weren’t going to lose that drill rig into the lake. That’s the last thing I wanted on my resume."

Over the long, dark Arctic winter, the 40 people at the camp — which was built and managed by the Russians on the shore of the lake, she recalls — lived comfortably. They enjoyed good food and warm sleeping quarters heated by a diesel-powered electric generator humming away nearby.

Out on the middle of the lake, there were sometimes communication problems between the Russian and American drilling crews working 12-hour shifts. "They didn’t speak the same language, but they knew the drill rig," Brigham-Grette recalled.

In May 2009, sensors planted on the lake indicated that the ice was getting mushy. The drilling rig and the sediment cores it had created were moved off the ice. They left four holes extending 1,043 feet down through the multiple sediment layers of the lake.

The drillers had reached the impact zone where the blasted remnants of a meteorite had remained undisturbed for 3.6 million years. There have been deeper holes dug in ocean sediments, but no one had drilled to these depths in lakes or on land in the Arctic.

The proxies from the cores, which have been studied in laboratories in Europe, Russia and the United States, now tell a more complete story of the long backward journey of climate change through time.

"We had it all recorded in one place," Brigham-Grette said.

Tomorrow: Troubling news from the past.