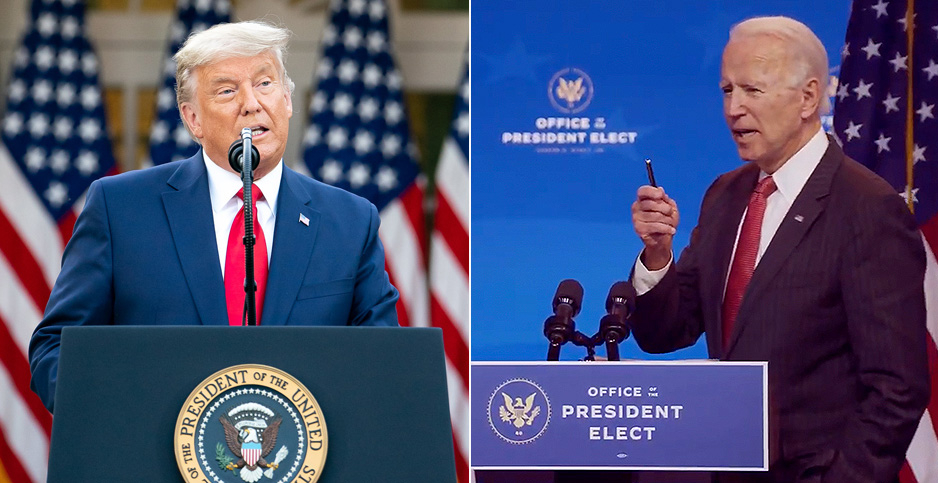 President-elect Joe Biden’s team — and Democrats generally — have been eager to wrest control of the bureaucracy and its rulemaking powers.

But the Trump administration’s legacy, including actions the president and his Cabinet take before Inauguration Day, will prove a significant impediment.

The president has an arsenal of tools at his disposal to hamstring the incoming administration’s plans for energy and the environment — through regulations, personnel and the permitting process.

There’s a deadline for "major" rules to be finalized at least 60 days before a new administration takes office. That already passed.

Still, just as the president continues contesting the election, his administration is pushing ahead with cementing its regulatory legacy. Four years of rule rollbacks will help President Trump’s legacy endure for years, especially if Republicans keep control of the Senate and Biden’s team is forced to propose new rules.

The president could also fire career employees, like EPA scientists, or other experts, like Anthony Fauci, director of the National Institute of Allergy and Infectious Diseases.

"President Trump will continue to build on this tremendous progress through more deregulation, expedited permitting and infrastructure development to continue America’s newfound energy dominance!" she wrote.

Agencies are moving ahead on an executive order that could eliminate civil service protections for a huge swath of federal employees by creating a new "Schedule F" classification (Energywire, Nov. 23).

House Democrats, federal unions and science groups have been pushing back, but their impact seems to be limited.

"This is a shameful and vindictive action from a president who was just fired by the American people," said Virginia Rep. Gerry Connolly, chairman of the Oversight and Reform Subcommittee on Government Operations.

He and other top Democrats asked the Government Accountability Office to look into the matter.

RealClearPolitics reported Saturday that the Office of Management and Budget intends to reclassify 425 employees, or 88% of workers vulnerable to reclassification. OMB did not respond to questions by deadline.

Andrew Rosenberg, director at the Union of Concerned Scientists, said the order not only undermines the federal government structure but threatens to do "serious damage" to an incoming Biden administration.

Designating OMB employees as "Schedule F" could allow for them to be fired before Biden takes office, greatly hampering the new president’s ability to develop his own budget, Rosenberg said.

"It’s a huge number," Rosenberg said, noting Trump has told the agency to prepare his budget. "I would view this as a pretty extreme measure."

Rosenberg said the agencies’ decision to go ahead with the executive order despite the election results suggests "no one is willing to tell the emperor he has no clothes."

Jayson O’Neill, an advocate at the left-leaning Western Values Project, said there are a "lot of booby traps" the Trump administration could lay down to impede the Biden team.

For one, the Interior Department appears dead set on holding a lease sale in much of the 1.6-million-acre Arctic National Wildlife Refuge before leaving office (Energywire, Nov. 17).

Recently, he noted, the Gulf of Mexico lease sale was massive at a time when oil prices are low and companies strapped for cash

O’Neill said that, by his count, Interior has leased 5.4 million of the 24.7 million acres of public land it put on the block.

"Even if Biden says no more fracking on public lands, look how many permits they are sitting on after Trump," he said.

GAO reported earlier this year that from 2016 to 2019, the Bureau of Land Management cut oil and gas permitting review times in half — down to 94 days — and the agency is approving more applications than operators use. As of March, oil companies were sitting on nearly 10,000 unused permits.

Nick Loris, an energy analyst at the right-leaning Heritage Foundation, stressed that much of the necessary legwork, including notice and comment, has been underway — noting that was "BLM’s intent from the get-go."

Major rules published in the next two months will not be effective on Inauguration Day, and the Biden administration can freeze them for review.

That applies to EPA’s changes to the Clean Air Act’s New Source Review rule on "project emissions accounting" that were published today in the Federal Register (Greenwire, Oct. 23).

Also in the pipeline are national air quality standards for ozone and particulate matter and a cost-benefit analysis rule for air regulations (Greenwire, Nov. 9).

Another action, which was just sent to the White House for review, would regulate greenhouse gas emissions from airplanes at a level environmentalists say is not strict enough (Greenwire, Sept. 17).

EPA’s "Strengthening Transparency in Regulatory Science" proposed rule would restrict the use of research in agency rules and other decisions (Greenwire, Sept. 15).

That rule, however, relies on a "housekeeping" statute reserved for internal procedures and is not designated as "major."

That means EPA could make it effective as early as 30 days after publication, noted Ben Levitan, senior attorney at the Environmental Defense Fund.

"Under certain narrow, statutorily enumerated exemptions, an agency can make a rule immediately effective upon publication," he added. "It is clear that none of those exemptions apply here, though it’s conceivable that [EPA Administrator Andrew] Wheeler will attempt to use one anyway."

At Interior, the department is set to finalize a controversial rule on habitats under the Endangered Species Act (Greenwire, Nov. 19).

At the Department of Transportation, a proposal to enact "regulatory reform" for gas pipelines is underway (Energywire, April 21).

And at the Labor Department, a proposal that would amend independent contractor status could affect the oil industry (Greenwire, Oct. 2).

Still, analysts stressed that "midnight" regulations are not uncommon at the end of presidential transitions.

"Not all midnight rules are created equal — some have been underway for a long time," said Clint Woods, former Trump EPA deputy air chief and now a policy fellow at Americans for Prosperity.

The Trump team appears to be moving regulations at a slower clip than all past presidents combined, he said. The administration is expected to finalize 11 regulations by January — a 70% dip from past lame-duck averages.

"Catholic priests have a saying that people die like they live. Nobody really changes in the last hours," he said. "Why should the Trump administration be any different?"