How Trump’s climate review could backfire 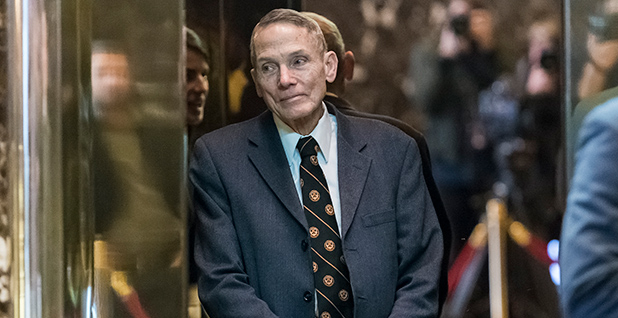 A White House effort to challenge climate science could end up strengthening the case against the Trump administration’s environmental rollbacks and potentially weaken future attempts to ignore research showing that humans are warming the planet.

The political exercise to question whether climate change threatens national security could backfire, according to experts. It would confront reams of scientific studies suggesting that rising temperatures stand to stress military missions like responding to humanitarian crises, achieving Arctic security and maintaining coastal bases.

Attempts to erode those findings could flounder, potentially weakening efforts by the administration to roll back rules limiting greenhouse gases at power plants and in cars, said George David Banks, a former climate and international energy adviser to President Trump.

In the early days of the administration, Banks participated in talks at the White House about reviewing climate science. Political officials decided it was a losing situation, he said. The newest effort to perform an "adversarial" review of climate science and its application to national security appears to be in the early stages, Banks said.

"One of the reasons we dismissed this idea is because it was a no-win situation for the administration at that time, and I would argue at this time, as well," he said. "It has the potential to undermine either the regulatory reform agenda or put the president in a box and reduce his flexibility."

That assessment follows revelations that William Happer, an adviser on the White House National Security Council, proposed an executive order to create a group that would question the way that climate science is used in national security documents. Happer, an emeritus physics professor with Princeton University, promotes the benefits of rising carbon dioxide levels in the atmosphere. He has described advocates of climate action as a "cult."

There is a White House recruitment effort underway to form the group, whether or not Trump signs the executive order. Those leading it have reached out to the handful of researchers who question climate science.

Meanwhile, the evidence that climate change threatens national security continues to grow. This week, a military leader said Russia has moved into the thawing Arctic and is bringing in weaponry (Climatewire, March 6).

That’s in addition to the damages already being experienced by Americans from more extreme precipitation events, drought, heat waves and wildfires.

The White House effort may be more precarious than Trump assumes, Banks said. There is little chance that Happer and others who reject the science will "win" a hostile review of mainstream research, he said. In the last two years, the administration has targeted many of the rules prioritized by the Obama administration to reduce emissions. Most of those rollbacks are being challenged in court.

"Either the mainstream science wins totally or in part, and if they win even in part, then that is a challenge for the administration," Banks said. "And if there is an acknowledgment that climate change is a national security risk, which any objective analysis would bring you to that conclusion, then the question is what is the response? How does this relate to the president’s announcement that we’re dropping the Paris Agreement, how does this relate to other domestic policies or the regulatory rollback agenda?"

Others see significant reason for public concern in the White House review because it has been set up to provide political cover for the president’s energy agenda.

Such a review could have lasting effects on national security, said Andrew Holland, chief operating officer of the American Security Project. The president could stop public planning for climate change, he said. The review, even if it’s scientifically dubious, provides a series of talking points that the president could use to dismiss climate policy.

"It’s all for an audience of one, and the president still retains real power and can do real things if he gets the justification to do so," Holland said. "It could be discredited in public and before everybody, but in a lot of things the president is the commander in chief, and when he gives an order, the chain of command has to follow that."

In theory, an adversarial review could strengthen the field of climate science, said Joseph Majkut, head of climate policy at the Niskanen Center, a conservative think tank that advocates for a carbon tax. Majkut said he supported the administration’s earlier efforts to conduct a "red team" review of the science, as long as it was conducted properly. It had the potential to strengthen the public’s perception of what is known about climate change and shift the opinions of some Republicans who are skeptical of scientists, he said.

But an adversarial review could be detrimental if it’s designed to be a partisan exercise.

The new effort doesn’t reflect that, he said. Happer is not known for having an open mind about climate research.

"This is the last gasp of institutional climate skepticism," Majkut said. "Maybe there is a plan, maybe there is a legitimate critique, but I haven’t seen any evidence of that."

To be successful, the White House effort should have a diverse composition of participants who aren’t in agreement, said Micah Zenko, author of the book "Red Team: How to Succeed by Thinking Like the Enemy." The exercise should have the necessary resources, personnel and access to achieve its objective, he said. The administration must also be willing to "fully digest, accept and act upon the results," otherwise it’s not a genuine effort to improve understanding, he said.

"Participants should not have a vested interest in that outcome, nor be unduly anchored in preconceived notions regarding the topic," Zenko wrote in response to questions. "If they do, then it’s merely a check-the-box activity to validate or invalidate a generally accepted proposition or thesis."

There are areas of climate science where a closer look would be warranted, because the research is still so uncertain, said Robert Kopp, director of the Rutgers University Institute of Earth, Ocean and Atmospheric Sciences and co-author of the National Climate Assessment. He said there are plenty of areas of rigorous debate in climate science that could use scrutiny. That could improve scientists’ understanding of how the Earth is changing, including the extent of sea-level rise, detection and attribution of climate change in extreme weather events, and the economic effects of rising temperatures.

Instead, the White House review will examine science that has been tested and upheld for years, he said.

"These people just want to go around and re-examine things that have been examined for decades as opposed to examining new areas where there are lots of scientists willing to chip in and be critical, because that’s where the interesting science is," Kopp said. "Nothing will be put to rest. There have been lots of opportunities and lots of critiques through the decades, but none of them matter to these people."