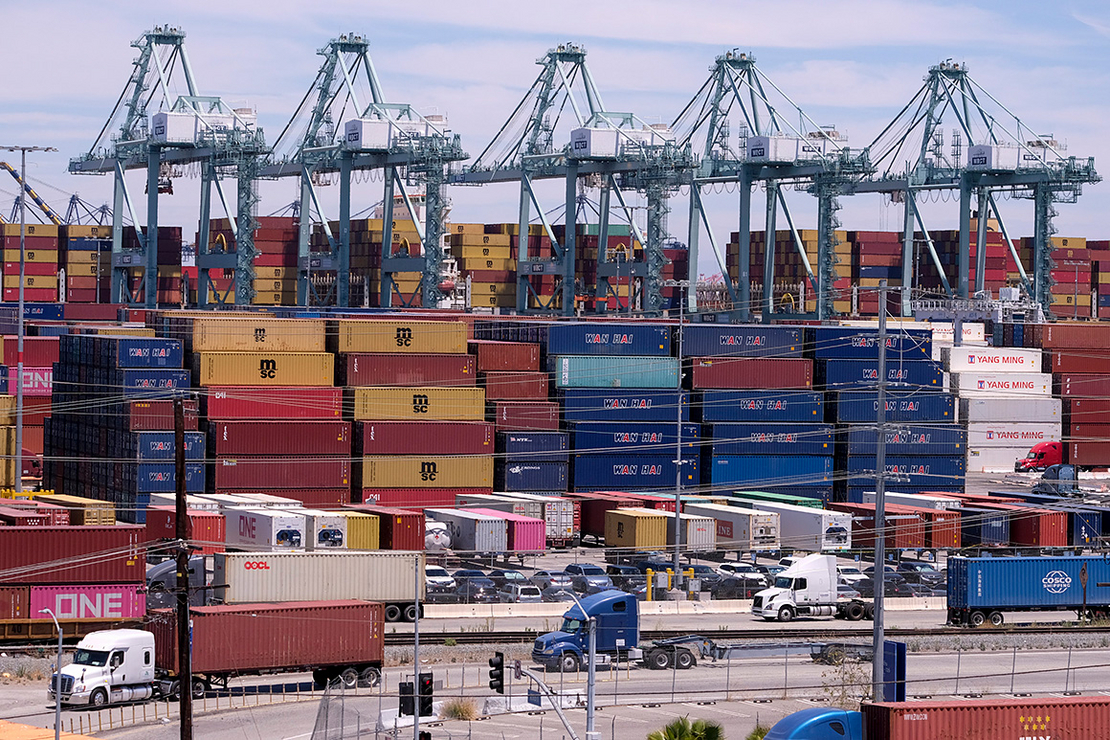 At ports like this one in Los Angeles, U.S. customs officials have detailed solar components linked to forced labor in China. Ringo Chiu via AP

The federal crackdown on China’s alleged forced labor abuses is spurring starkly different views of the dangers facing the U.S. solar industry, with one renewable group warning that almost 70 percent of utility projects are at risk while others say the challenges are manageable.

The views were laid out this month by solar trade representatives, labor unions, watchdogs, photovoltaic panel producers and other policymakers in response to a request for information from the Department of Homeland Security’s Customs and Border Protection (CBP). The agency has been assessing how to enforce Congress’ ban on goods made in the region of Xinjiang — a center of China’s reported abuses and a production hub for the solar industry’s materials.

In one letter to CBP made public on Friday, solar advocates at the American Clean Power Association said that “a full two-thirds” of utility-scale projects planned for this year were already at risk of delay or cancellation, due to CBP’s move last June to blacklist one major Xinjiang-based solar supplier.

The blacklist was a forerunner to Congress’ December ban, which extended the import restrictions to any company that operates in Xinjiang, unless it can prove its shipments are not tied to forced labor.

The association, a renewable trade group whose board includes some of the U.S.’s biggest solar developers, said the initial blacklist led to “sweeping detentions” of imports from major panel suppliers, which had used components from the single blacklisted company. The group complained of a slow and clumsy process for getting the panels released, arguing that it had resulted in a “huge economic cost.” Almost one-third of all utility-scale solar projects from last year were delayed or canceled due to the restrictions, it said.

But SEIA also sounded comparably sanguine about the risks to U.S. solar from the congressional ban.

In a press call on Tuesday, SEIA’s President Abby Ross Hopper said that while the blacklist had caused obstacles, U.S. solar companies were beginning to learn how to demonstrate to customs officials that their supplies were free of forced labor.

“We have been pleased with the collaborative conversations we continue to have with CBP, and I think most of the shipments that were detained have been released now,” said Hopper.

Her group is continuing to press Congress for new and extended solar incentives, including tax credits for domestic manufacturers. Its chief concern is related to a petition for new import tariffs currently being studied by the Commerce Department, which will decide by March 25 whether to open a formal probe. The tariffs, requested by manufacturer Auxin Solar, would cover about 80 percent of all solar imports, said Hopper.

Auxin’s request has gotten Congress’ attention as well. On March 9, 15 bipartisan senators sided with SEIA, warning in a letter to Commerce that the tariffs could “severely harm” solar’s expansion.

Two Ohio senators, also representing both major parties, came down on the other side of the issue that same day, sending a rival letter asking Commerce to honor Auxin’s request for a probe. This week, 15 bipartisan House lawmakers sent another letter arguing that new tariffs wouldn’t unduly harm the solar industry. “We fully believe that American innovators will always succeed when given a level playing field and that full and fair enforcement of our trade laws is compatible with strong industry growth,” they wrote.

“There is still a lot of information and input that is pending to reach CBP within the scope of the [December ban’s] rulemaking process,” Jeffrey Quiñones, public affairs specialist for CBP, wrote in an email. In June, he noted, CBP’s newly created Forced Labor Enforcement Task Force is due to submit strategies to Congress on addressing forced labor in China, with input from the State Department.

Other responses to CBP’s request for information underscored the expansiveness of the solar industry’s supply chain — a factor that makes the forced-labor issue a potential powder keg for the U.S. industry.

Xinjiang is the source of about half of the world’s polysilicon, a processed quartz used in solar cells, which generate power from light as part of photovoltaic panels.

Fair trade watchdogs, at least one U.S. solar manufacturer and the AFL-CIO — a close ally of the Biden administration — said in their comments that on-site inspections by independent auditors would be necessary to make sure that Xinjiang factories, for solar and other products, were free of forced labor. But that isn’t possible in the region, given the hostile environment in China toward auditors of that kind, the groups said.

Proper enforcement of Congress’ ban would have to keep guilty companies from evading it by using Southeast Asian countries like Malaysia, Thailand and Vietnam as assembly grounds, wrote the AFL-CIO’s international director, Catherine Feingold.

“While we support robust human rights due diligence as a component of responsible business conduct, we have serious doubts whether it is possible to carry it out presently in [Xinjiang] and China more broadly,” she wrote.

The AFL-CIO, however, also argued that customs officials had not done enough to crack down on the solar industry’s links to forced labor.

Customs officials had detained only a small fraction of the total shipments linked to the company it blacklisted, known as Hoshine Silica Industry Co., said Feingold, making it an example of “weak enforcement.”

Congress’ ban will provide a true test of whether the urgency of addressing the climate crisis will lead customs agents to compromise human rights and allow companies to exploit workers, her letter argued. “The world is watching the implementation of this import ban as a signal for how to confront the reality of widespread forced labor in the global economy.”