How U.S. fossil fuels are tied to Ukraine and impeachment 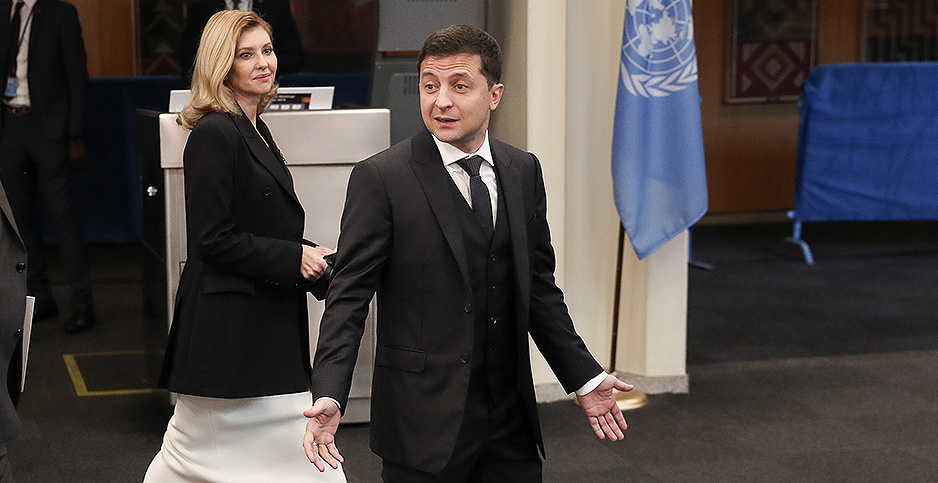 Ukraine, now at the center of a rapidly accelerating impeachment inquiry against President Trump, has been central to the president’s efforts to increase U.S. exports of fossil fuels.

The Eastern European nation sits at the crossroads of Europe and Russia. Today, roughly a third of Russian gas consumed in Europe passes through Ukraine. That has made the country uniquely susceptible to Russian meddling. Moscow has twice cut off gas supplies to Ukraine in the past 15 years and stopped selling directly to the country after the onset of the civil war there in 2014. The prospect of a third shutoff looms at the end of the year, when the current transit agreement between Russia and Ukraine is set to expire.

The impeachment inquiry against Trump could strain the relationship between the United States and Ukraine. House Democrats are seeking information on how the president and his administration may have pressured Ukraine to investigate former Vice President Joe Biden. The White House may have delayed military aid to Ukraine as part of a campaign to force Ukrainian President Volodymyr Zelenskiy to open an investigation into an energy company that employed the former vice president’s son.

And while Ukraine has benefited financially and strategically from U.S. support for its energy independence from Russia, that policy is usually centered around the country’s desire to maintain American support for its military, said Margarita Balmaceda, a researcher at the Davis Center for Russian and Eurasian Studies and at the Ukrainian Research Institute at Harvard University.

"Ukraine leaders welcome U.S. support and investment in its energy sector," Balmaceda said. "Ukrainian leaders may even pay lip service to Ukraine eventually somehow buying U.S. liquefied natural gas instead of buying gas that originated in Russia, but I would say the key here is that Ukraine is dependent on anybody that is able to offer it military support, because Ukraine is in a very, very difficult situation in the face of Russian military intervention."

Indeed, before the nation became a flashpoint in what may lead to the third impeachment of an American president, Ukraine was a significant piece of the Trump administration’s international "energy dominance" policy.

President Trump has seized upon the conflict in Ukraine as a central argument for bolstering the sales of American fossil fuels abroad, arguing that U.S. allies need reliable energy suppliers to ward off adversaries and grow their economies. Administration officials have coordinated sales of Pennsylvania anthracite, a particularly carbon-intensive form of coal, to help offset a decline in Ukrainian coal production associated with the conflict there (Climatewire, Aug. 1, 2017).

And Trump has aggressively marketed U.S. liquefied natural gas exports as an alternative to Russian gas.

"Ukraine already tells us they need millions and millions of metric tons right now," Trump told a gathering at the Department of Energy in 2017, when he announced his desire to see the United States dominate global energy markets. "We want to sell it to them and everyone else all over the globe" (E&E News PM, June 29, 2017).

The sales pitch has not been limited to Ukraine. Former Interior Secretary Ryan Zinke made national security interests a central part of his case for proposed coal export terminals along the West Coast, saying they were crucial to supplying allies like Japan and South Korea (Climatewire, Oct. 16, 2018). The United States has also made a point of selling LNG to Poland under the argument that it would limit that country’s reliance on Russia.

The dynamic illustrates a challenge for American policymakers who want to reduce greenhouse gas emissions while also strengthening allies by supplying them with U.S. fossil fuels. Former Obama and Clinton administration officials said they believe LNG exports are crucial in Ukraine, which relies on gas for heating to see out the long winter months.

Building out Ukraine’s renewable energy generation and electrifying its heating sector would reduce the country’s reliance on Russian gas, but that would take time and money, said Jason Bordoff, who served as a climate adviser to President Obama and now teaches at Columbia University.

"We need to act much more urgently to reduce the carbon intensity of the world’s energy mix, while at the same time continuing to address other economic and national security concerns raised by the energy mix that we have today," Bordoff said.

Paul Bledsoe, a former Clinton adviser who now helps devise strategy for the Progressive Policy Institute, argued that American LNG can displace methane-intensive Russian gas in Ukraine. He pointed to a 2015 Carnegie Mellon University study that estimated the methane leakage rate of Gazprom OAO, the Russian gas giant, at 5% to 7%. Gas loses its greenhouse gas emissions advantage relative to coal when methane leaks in pipelines and other gas infrastructure reach 3.5% of total gas volume.

Bledsoe argued that Trump has squandered the greenhouse gas advantage of U.S. gas by rolling back methane reforms. The president has also missed the opportunity to push advanced energy technologies, like grid management systems that can help utilities balance fossil fuel plants and renewables, he said.

"If you want to be building the infrastructure for the next 100 years, you’re not going to rely simply on natural gas; you’re going to have renewables, energy storage, a smart grid and big efficiency gains," Bledsoe said. "Gas is one arrow in our quiver. It is an important one. We’re going to need it for a while. But to focus on it alone is to neglect our tremendous advantages in other tech and what is in fact our allies want."

Though the Trump administration may have temporarily delayed military aid to Ukraine, it has advanced much of the same American energy policy the region has seen for decades, said George David Banks, a former Trump adviser on international energy issues.

"There’s not some huge change in Trump foreign energy policy toward Ukraine; it’s pretty consistent U.S. policy as it pertains to Ukraine, Poland, Russian energy," he said. "The reason why the administration has opposed Nord Stream 2 as much as it has is because of the negative impacts on Ukraine."

Amy Myers Jaffe, an energy fellow at the Council on Foreign Relations, echoed that point. American efforts to wean Europe from Russian gas date back to President Reagan, she said. Any attempt to change U.S. policy on the matter would be like moving an oil tanker: gradual and time-consuming.

"It would still be hard to change policy on Nord Stream 2, but they haven’t been doing that," she said. "Our actual policy has been anti-Russian and pro-Ukrainian."

The president’s eagerness to sell American LNG as an alternative to Russian gas ignores the fundamentals of the international gas market. New LNG import terminals in countries like Poland are a boon to American exporters, said Ira Joseph, who heads global gas and power research at S&P Global Platts.

But the United States is not the only country scaling up its LNG export capacity. Russia is also moving forward with plans for new LNG terminals and is likely to be able to sell into Europe at an even cheaper price than the U.S. suppliers, he said.

"The administration has made a lot bigger deal of this idea of trade and selling LNG to Europe," Joseph said. "They have created this dichotomy between U.S. LNG and Russian gas, when the real dichotomy is LNG versus Russian pipeline gas."

Zelenskiy used the August phone call with Trump to emphasize the country’s desire for energy independence, according to the account of the call released by the White House. Zelenskiy, after mentioning that he recently stayed at Trump Tower in New York, reassured Trump that his country is buying more American energy. That assurance came as Trump pressed him to investigate the Bidens.

"I believe we can be very successful and cooperating on energy independence with United States," Zelenskiy said, according to the White House account. "We are already working on cooperation. We are buying American oil but I am very hopeful for a future meeting. We will have more time and more opportunities to discuss these opportunities and get to know each other better."

Zelenskiy likely mentioned the purchase of American oil to reassure Trump that the country is working to satisfy his trade agenda of increasing U.S. exports of fossil fuels, Banks said.

"It’s not uncommon for a leader to basically plug ‘This is what we’re doing.’ Everyone knows the president’s top priority is trade, and they’re going to talk about they’re buying more U.S. X, Y and Z," Banks said. "As a cost of energy security, it’s a priority. It plays a role in the bilateral relationship. They’re going to bring up something like that."