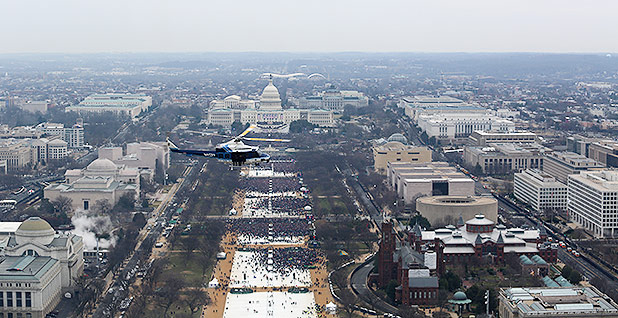 As Inauguration Day came to a close, the communications staff at the National Park Service was feeling a little frustrated.

They were getting emails from reporters about two retweets from the official NPS Twitter account that were critical of the Trump administration. Stories were popping up on news sites about a "rogue" agency and its posts on President Trump’s inaugural and scrubbing of government websites.

But Interior officials prevented them from releasing a statement. In a typo-laden email to a colleague at 10:47 p.m., NPS spokesman Thomas Crosson vented, calling it amateur hour.

"It is [amateur] hour at DOI Commas right now. We can say anything as of now… waiting on the new Jessica to bless a statement," Crosson wrote, referring to the replacement for former Interior spokeswoman Jessica Kershaw. "Meanwhile… we are dead silent on it… and looking like clowns."

The interaction is among emails the Interior Department and NPS released yesterday in response to Freedom of Information Act requests from E&E News and other media outlets. They reveal miscommunication between NPS and Interior staffers, fueling a national story about the new administration’s clampdown on social media.

Crosson repeatedly pushed for his superiors to lift the Twitter ban. At 11 p.m. Friday — hours after the NPS retweets had been removed — he warned that conspiracy theories were "starting to gain traction… and that’s just among NPS employees."

By the next morning, he had spoken to Megan Bloomgren, incoming Interior communications director and wrote to a colleague that the new communications team "never intended for a full Twitter shutdown" (Greenwire, March 22). It took several more hours, however, for Interior to tell bureaus they could tweet.

Throughout the suspension, employees questioned the need for total Twitter silence. Michael Quinn, the website coordinator at Grand Canyon National Park, warned that the park was in the middle of a major winter storm.

"Twitter is an established way that we connect with travelers — and inform them of park road closures and deliver safety messages," he wrote that Friday. "We also use Twitter to exchange info with the AZ Dept of Transportation and the National Weather Service. Any suggestions?"

Quinn and others got permission to post such public safety notices. But other bureaus were similarly confused. The U.S. Geological Survey asked about automatic tweets that related to protection of life and property, and the Fish and Wildlife Service asked for clarification on a "shut down" order sent by Frank Quimby, who works in Interior’s public relations office.

"By ‘shut down’ do you mean refrain from using or actually shut down? There’s a mighty big difference!" Gavin Shire, chief of public affairs at FWS, wrote to Quimby in response to a Friday afternoon email announcement that directed staff "to shut down twitter platforms immediately until further notice."

Quimby replied: "just stop all tweeting[.] not shut down[.]"

Quimby later took partial blame for the shutdown, saying in an email to Shire that some of the confusion was "perhaps [due] to overreaction and conflicting information from me, especially."

By Friday night near midnight, NPS still did not have an approved statement to send to inquiring reporters. Crosson recommended a statement go out "ASAP," but the agency was unable to get approval from the new Interior communications staff.

"[T]rying desperately to get a decision now," Quimby said, adding that Bloomgren — whom he first contacted around 11 p.m. — "seems disinclined to respond tonight."

The next morning, President Trump called acting NPS Director Mike Reynolds and asked him to produce additional photographs of the inauguration, according to an article last month in The Washington Post.

At 9:41 a.m., Reynolds sent an email to Tami Heilemann, a photographer at Interior, with the subject line: "have a wh emergency regarding pictures… can u call."

Heilemann sent several photos from the inauguration to choose from. Ultimately, Interior sent close-ups of the Capitol that showed the crowd in a pleasing light (Greenwire, March 22).

"Tami, we are to send to Sean Spicer at White House direct. They want your info etc. but I will find out about what more they need," Reynolds wrote at 10:27 a.m. "Spicer might want to talk to you."

Meanwhile, Bloomgren was spending her first day on the job deciding how to respond to a viral story about the Twitter ban. On Saturday, NPS released a statement about the retweets — calling them "inconsistent" with its approach to social media — and told all bureaus to start tweeting again.

In an email to Quimby, she expressed frustration about the new Interior staff’s first interaction with the Park Service.

"I hate that this fire drill was our first introduction. Enjoy your weekend and we look forward to working with you in smoother times ahead," she wrote.

The emails show that both NPS and Interior communications officials — incoming political appointees and career employees — thought the NPS retweets were inappropriate. One showed photos comparing the turnout of Trump’s inauguration to Obama’s 2009 inauguration. The other shared a tweet from Twitter user Anne Trumble noting the absence of civil rights, climate change and health care on the new White House website.

In an email sent at about 5 p.m. Friday to officials stationed at Interior’s bureaus, Gillick said "things went well" in an initial meeting with Bloomgren.

"And then someone inadvertently tweeted an unwise and unflattering RT about the new administration to the public," Gillick said. "No doubt this was done in error. That said, the new leadership is not jazzed."

Gillick then said an order came down from the Trump administration to cease all tweeting.

"The new administration says that the Department and all Bureaus will not tweet this weekend and must wait for guidance before returning to Twitter. Such guidance is not expected until Monday at the earliest," Gillick said, adding to make sure that any scheduled tweets "are no longer scheduled."

"TLDR: I’m not tweeting, we’re not tweeting and none of our people are tweeting. Discussion will continue next week," Gillick said.

That same day, Crosson expressed frustration with social media posts from the Women’s Rights National Historical Park in Seneca Falls, N.Y., that highlighted the Women’s March that took place at the site the day after the inauguration.

"On the NHP [women’s rights] page …. think that’s what happens when you put untrained, undergraded folks in charge of your comms efforts (my personal opinion and I’m making a sweeping assumption here.) Good topic for the retreat," Crosson wrote.

As it was responding to reporter inquiries, NPS also was on the hunt for who was responsible for the errant retweets. Amber Smigiel, the public affairs specialist for social media, told officials she did not post them and opined that someone accidentally posted from a personal account.

"Even if we can eliminate them as a potential poster, I want to reach out and see if they happened to share the PW with a ‘trusted’ individual," he wrote in an email.

Smigiel sent over a list of names. NPS has since identified an employee who "inadvertently" posted the retweets, Crosson told E&E News yesterday.

"Appropriate administrative action was taken, social media guidance was reissued to remind employees of NPS policies, and account access has been limited and remains monitored," he said.

Discussions among Park Service employees in the wake of the inauguration show concern about posting information on climate science and related subjects.

"It sounds like our plan is to just make sure we stick very carefully to the science and impacts and make sure we do not venture into advocacy," Natural Resource Stewardship and Science Directorate employee Matt Holly wrote in an email to Smigiel as the pair discussed the inaugural tweets.

He later wrote: "Which we’ve always done a pretty decent job about anyway, I think. There were a couple times I knew I was pushing it but felt like we had that support for wiggle room in the past. Now we know we just have to play it slightly safer."

On that Saturday morning, Smigiel was already emailing with the NPS communications staff on what she should tweet when given the all-clear.

"Ok, well, we got about 10k new followers overnight who are waiting for our next tweet," she wrote. "Any ideas what it should be?"

"Is a tweet about the weather too cheeky?" replied April Slayton, the Park Service’s assistant director of communications. "We could retweet the [National Park Foundation] post about unbelievable photos of national park weather that they posted yesterday."

The eventual decision was more direct: a post expressing regret for the retweets, along with a photo of a bison.

As theories continued to swirl about the Trump administration’s role in shutting down Interior’s Twitter accounts, Shire of FWS summed up the view of agency employees in a Saturday night email to Interior’s Quimby.

The directive to stop tweeting "caused some concern in our offices around the country," Shire wrote.

"The perception was that this was a government-wide halt ordered by the administration, rather than Interior-specific direction as a result of specific problematic actions, fueling concern that there was some scheme afoot to silence federal bureaus in their social media activities," he said. "A little more information would have gone a long way to calming those fears and stopping the wild assumptions."

Click here, here, here and here to see the Park Service’s and Interior’s emails dealing with the critical tweets of the Trump administration.