How Utah Olympic bid could bolster shift to clean energy 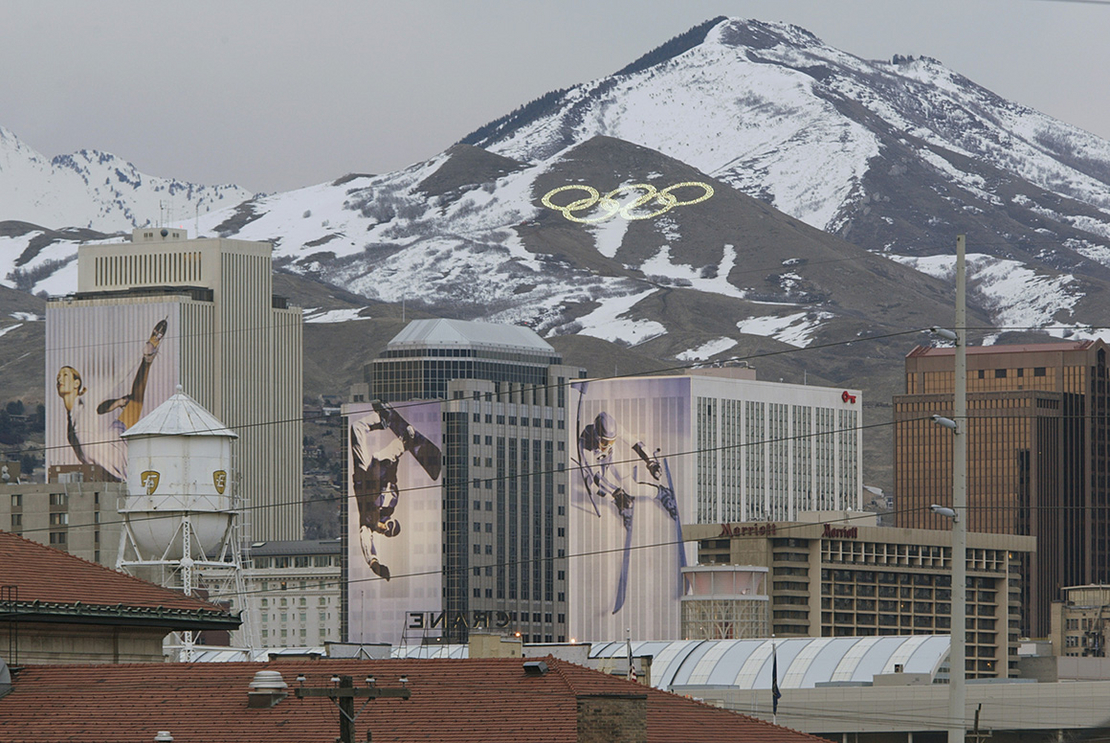 A view of downtown Salt Lake City as the Winter Olympics were held in February 2002. Brian Bahr /Getty Images

Two decades after hosting the Winter Olympics, Salt Lake City is vying to bring the event back to Utah, with major implications for the state’s electricity mix.

This time, the city will have to meet a pressing new demand from the International Olympic Committee (IOC): run a two-week, snow-based international sporting event and leave the climate better off than before.

Advocates hope that sea change — and the platform the Olympics provide — could help catalyze the clean energy transition in Utah, where more than 60 percent of the state’s net electricity generation came from coal in 2021. Salt Lake City is bidding to host the 2030 Winter Olympics — the earliest open spot on the calendar. It also is in contention for the 2034 games.

Organizers of the Utah bid met with IOC officials in Switzerland in June and discussion of the Olympics’ sustainability goals continued at an IOC executive board meeting last month, but a decision is not expected until next year.

Mario Molina, president of the climate advocacy group Protect Our Winters, said that an Olympics bid should put pressure not just on the host city, but the state and entire country, to be more aggressive about renewable energy — even with Utah’s current reliance on fossil fuels.

“It’s possible to be carbon neutral,” Molina said. “The best thing we can do is the best we can do. We know it’s hard for an event of that scale to be absolutely carbon neutral, but it can leverage influence with the host city and country to drive for climate action.”

According to IOC guidance issued in 2020, organizing committees for each Olympics will be required to minimize and compensate direct and indirect carbon emissions created by the event, as well as implement “lasting zero-carbon solutions for the Olympic Games and beyond.”

Skeptics have increasingly heaped criticism on the Olympics for their environmental and economic costs for host cities, often with good reason, said Tim Kellison, a professor at Georgia State University.

Kellison, who studies sport ecology, said the events can be defined by “white elephant facilities that are built for a three-week event and aren’t utilized much afterward.”

“There may also be a reluctance on the part of many sports actors and businesses to speak out on climate change,” Kellison said. “To their credit, the IOC has made environmentalism a pillar of Olympism, especially over the past 20 to 30 years.”

Fraser Bullock, CEO of the Salt Lake City-Utah Committee for the Games, said in an interview that the IOC’s goals “fit perfectly with what Utah is already trying to accomplish” and that sustainability has long been a principle of the bid.

The 2002 games, he said, helped spur investments in light rail and public transportation, and organizers are already in touch with local governments about how investment in the Olympics could align with existing carbon reduction goals.

In a 2018 report, Utah’s Olympic and Paralympic Exploratory Committee promised an event that “could help establish a path to systemic sustainability,” one that could be a benchmark for future Olympics.

Key to that pledge is the fact that venues from the 2002 games — including the Utah Olympic Park in Park City and the Soldier Hollow Nordic Center southeast of Salt Lake City — have been maintained and could be reused, reducing the need for new construction. A potential 2030 Olympics in Utah would be just two years after Los Angeles hosts the Summer Olympics, which could also create an opportunity to reuse equipment, electronics and other temporary infrastructure, organizers have said.

The bidding process also dovetails with Salt Lake City’s independent goal to achieve net 100 percent renewable electricity by 2030. The city plans to achieve that goal as part of the Community Renewable Energy Program, a community aggregation program with 17 other Utah cities and counties, including the winter sports havens of Park City and Summit County (Energywire, June 10).

Electricity needs for the Olympics could be integrated into those goals, the exploratory committee said.

However, Utah itself got about 85 percent of its power from coal and natural gas in 2021, according to the U.S. Energy Information Administration, and does not have a statewide clean energy mandate.

David Eskelsen, spokesperson for Rocky Mountain Power, which serves most of Utah, said that while the utility has not had any detailed discussions, “whatever the city’s goals and the [U.S. Olympic & Paralympic Committee’s] goals might be, we are ready to discuss how we might meet those.”

Eskelsen added that parent company PacifiCorp’s long-range plans envision new solar and wind resources that would help lead to a 74 percent reduction in greenhouse gas emissions from 2005 levels by 2030.

In a statement, Salt Lake City Mayor Erin Mendenhall said the Community Renewable Energy Program — which will represent about 25 percent of the state’s power load — “puts us in an incredible position to truly live up to the sustainability goals set by the International Olympic Committee.”

“There’s no doubt in my mind that Salt Lake City could and would play host to one of the greenest Olympics ever — and this is one of the aspects that makes us very competitive,” Mendenhall said.

The overarching question, however, is whether a carbon-positive Olympics is even possible.

Organizers bragged that the Summer Olympics held in Tokyo in 2021 relied as much on renewable energy as possible and suggested that carbon credits offset more than the total emissions the games created.

Beijing, which hosted the 2022 Winter Olympics, likewise boasted that it would use only wind and solar energy to power the games, while repurposing and retrofitting existing venues to run more efficiently with technology like carbon dioxide refrigeration for indoor venues. Organizers purchased carbon offsets ahead of the games to make up for an estimated 1.3 million metric tons of carbon dioxide equivalent attributed to the Olympics, although the final emissions figure was likely lower than that because spectators were not allowed to attend.

Environmentalists question the use of carbon offsets, which are notoriously difficult to track and could be linked to tree growth that is not permanent. The total impact of any Olympic Games — including transportation, lodging and consumption for spectators, athletes and political delegations — is far greater than simply that of buildings and power for two weeks of competitions.

At the same time, the spotlight of hosting means that electric reliability will be key. Rocky Mountain Power’s Eskelsen said the utility typically has excess power in the winter, and the experience of supplying the 2002 Olympics means that there are no concerns about reliability — even with a power mix moving toward more renewables that are intermittent and away from fossil-fuel plants.

Still, fossil fuel advocates have said clean energy alone may not be enough for the state.

Rikki Hrenko-Browning, president of the Utah Petroleum Association, said in a piece last year that natural gas is often bundled with large wind and solar projects, helping to improve their reliability and affordability. She argued that going “full speed ahead on wind and solar power will not provide us 100% of the power we need to continue to live the lives we’re accustomed to.”

“Oil and natural gas are not the enemies of wind and solar development,” she said.

A 2021 study by researchers at the University of Lausanne in Switzerland found that the Olympics have actually grown less sustainable over time, in part because of the increasing size of the events.

Although the study found that the Olympics “could prove particularly useful in addressing the looming sustainability challenges for cities in an age of rapid urbanization,” in reality organizing bodies “fail to provide a coherent definition or model for independent evaluation.”

Across 16 Olympic Games studied, the report found that Salt Lake City’s 2002 games were the most sustainable, but still were not rated as highly sustainable.

“All the commitments on paper have zero impact on the geochemistry of the climate,” said Molina of Protect Our Winters. “There has to be 100 percent accountability and 100 percent transparency. More important than making the games carbon neutral is for the IOC and Olympians to leverage the platforms to drive for large-scale policy changes.”

Georgia State’s Kellison said mega-events like the Olympics that make big promises can often fall short when faced with the reality of the situation, especially with little enforcement possible.

“It’s not like the IOC can step in and say we’re stopping the games,” he said. Still, he added, that should not deter cities from using the Olympic platform to make some change.

“The fact that Salt Lake City has made this part of its plans and is already working on this, that’s something that could even push action at the state level,” Kellison said. “The Chinese government used its latest Olympic Games to demonstrate a broader commitment that hasn’t been seen in the past. There’s reason for skepticism, but if it happens it can promote a lot of action.”

Advocates say the sustainability pledges aren’t just a tool for the games — they’re an existential necessity.

A study from the University of Waterloo found that without action to curtail greenhouse gas emissions, only one of 21 previous Winter Olympics host cities — Sapporo, Japan, which hosted in 1972 — would have the right climate conditions to hold a safe event by 2080. Even if the goals of the Paris climate accord are met, the report said, only eight of the 21 cities would have the right conditions.

Troy Murphy, a former Olympic mogul skier and longtime Utah resident, said that’s a warning not just for winter athletes and fans, but “for all humanity.”

“If we want the Winter Olympics to be around, it’s going to be super important that we take these issues seriously,” said Murphy, who is affiliated with Protect Our Winters. “Any of the host cities, but especially a place like Salt Lake City, should be meeting these goals whether they get the Olympics or not.”