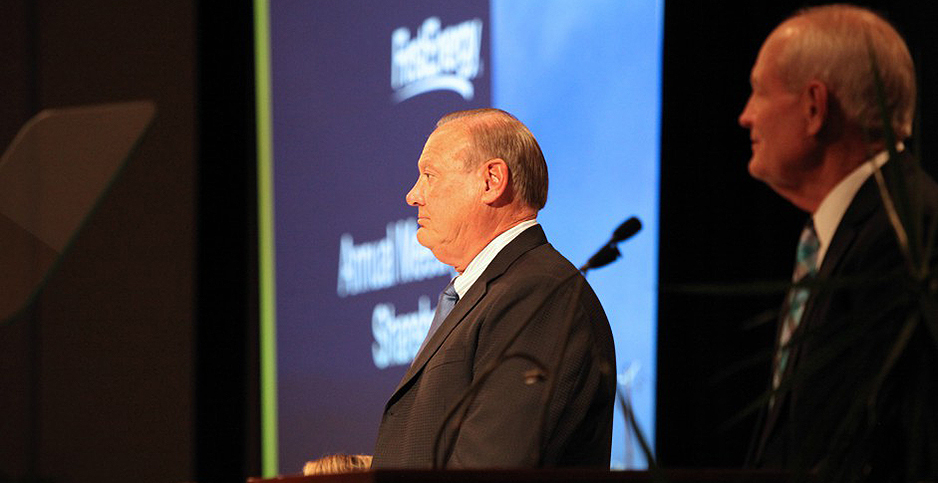 Chuck Jones (left) is the CEO of FirstEnergy Corp., the Ohio utility connected to an alleged bribery scandal. FirstEnergy

Federal investigators have accused Ohio’s recently deposed House speaker of running a racketeering ring. The question now is whether they will charge the utility that financed it.

The case has significant implications for how corporations seek to shape public opinion on climate and energy policy. Electric utilities have joined the rush to employ dark money groups since 2010, when the Supreme Court eased restrictions on corporate spending in elections.

There’s been a rash of freewheeling influence ever since.

In Michigan, utility officials acknowledged pumping millions of dollars into a dark money group that savaged a state lawmaker who favored breaking up a corporate monopoly on electricity generation.

Those actions were within the limits of legality under Citizens United, the 2010 Supreme Court case that allowed corporations to spend unlimited amounts of money on political campaigns.

Then the Ohio scandal arrived.

The case is a rare instance where federal prosecutors have brought criminal charges against people associated with dark money expenditures, according to campaign finance experts.

"We only have a decade of the velociraptors testing the fence," said Ciara Torres-Spelliscy, a law professor at Stetson University and fellow at the Brennan Center for Justice. Many of the legal questions surrounding the use of dark money groups have yet to be litigated, she said.

Corporations have generally sought the shelter nonprofit social welfare organizations, known legally as as 501(c)(4)s, because they can spend unlimited sums on elections and don’t have to reveal their donors. That can prevent blowback from shareholders or customers of big-spending corporations, Torres-Spelliscy said.

But the concern of many transparency advocates has long been that such groups could be used to conceal criminal activity, as is now alleged in Ohio.

"It is an evil genius way of doing bribery, because under most circumstances, a 501(c)(4) is allowed to keep donors private," she said. "Literally millions can go into an election, and you just can’t tell where the money came from."

In Ohio, ads supporting a bailout of two nuclear plants rained down on the state’s airwaves in recent years. Federal prosecutors allege that the group behind the ads was secretly controlled by Larry Householder, the former Republican speaker of the Ohio House.

They accuse Householder and four associates of running a racketeering ring and accepting almost $60 million from a utility to enrich themselves and expand the Republican lawmakers political power. In return, he finalized legislation that provided $1.3 billion in subsidies to a pair of struggling nuclear plants, according to prosecutors. The law also bailed out a pair of coal plants and repealed the state’s clean energy standard.

The charges do not name the energy company at the heart of the scheme. The federal criminal complaint refers only to "Company A Corp," which is said to have contributed nearly $60 million toward Householder’s group.

But there is little question about the identity of the company.

FirstEnergy Corp., an Akron-based utility, owned the only two nuclear plants in Ohio until recently. A lobbyist for its former subsidiary was one of the four people arrested along with Householder. And its CEO, Chuck Jones, has admitted that the utility contributed around $15 million to Householder’s dark money group called Generation Now. Jones denies that the company did anything wrong (Greenwire, July 24).

The bailout Householder shepherded through the Ohio Legislature in 2019 was not the first measure sought by FirstEnergy to support its struggling coal and nuclear plants, which were fighting to stay afloat amid a wave of cheap natural gas. The company had made previous attempts to secure a bailout in Columbus and Washington, D.C. Those efforts failed (Climatewire, July 24).

Campaign finance experts say FirstEnergy’s contributions to Generation Now allowed the company to conceal its involvement in the advertising blitz, avoiding blowback from the public. The ads funded by Generation Now described the bailout as a clean energy bill. They also warned of imminent job losses and a Chinese takeover of the power grid if the measure failed to pass.

"FirstEnergy did not want the public to know they were spending this money and they were behind these communications," said Brendan Fischer, director of the federal reform program at the Campaign Legal Center, a nonpartisan watchdog that seeks to limit the influence of money in politics.

"Time and again, when we get a glimpse behind the curtain, we find these dark money donors are getting something significant in return," he added. "Voters can’t hold elected officials accountable for taking action to benefit these secret donors, because the public doesn’t know the ID of the donors at all."

The climate consequences of the bailout are potentially significant. While FirstEnergy publicly sold the bailout as a clean air bill, arguing that it would preserve Ohio’s largest source of carbon-free electricity generation, the measure needed the support of the coal industry and opponents of renewable energy to win passage.

AEP and FirstEnergy were part-owners of two coal plants that were guaranteed subsidies as part of the bailout. A third coal plant, operated by FirstEnergy’s former subsidiary, reversed plans to shutter and remained open.

"It is problematic and incumbent on our regulators to be the watchdogs," said Margrethe Kearney, an attorney at the Environmental Law and Policy Center. "What it shows is the regulator is captured. The Legislature is captured. There is no one minding the store. How many of these have happened where they weren’t so stupid to get caught?"

Whether FirstEnergy has done anything illegal is an open question. The company denies wrongdoing.

FirstEnergy has defended itself by saying it is not responsible for the actions of its former subsidiary, FirstEnergy Solutions, which operated the utility’s power plants in Ohio and Pennsylvania and stood to benefit from the bailout law.

Parent and subsidiary were ensnared in a long divorce when the Ohio bailout passed. FirstEnergy made the decision to spin off FirstEnergy Solutions in 2016, as a surge of cheap natural gas drove down wholesale power prices and threatened to close its coal and nuclear plants. FirstEnergy Solutions declared bankruptcy in March 2018 and emerged earlier this year as its own company, Energy Harbor Corp.

"Since November 2016, at which time the FirstEnergy Solutions board was replaced with two independent directors and three new board members from the competitive generation business, FirstEnergy leadership no longer had any decision-making power regarding the strategic direction of FirstEnergy Solutions," Jennifer Young, a FirstEnergy spokeswoman, wrote in an email.

FirstEnergy does not stand to receive any subsidies from the bill, she said. Those will go to Energy Harbor. FirstEnergy nevertheless financially supported passage of the law because it viewed the bill as good public policy that could lower utility bills and prevent plant closures in communities it serves, Young said.

"Like many companies, we make prudent decisions to spend corporate funds on issues that we believe are important to our customers and shareholders," she said.

The company’s detractors are dubious of those claims. Even if FirstEnergy never saw a dime from the bailout, it still stood to benefit from the Ohio bill. It likely would have been saddled with higher costs associated with FirstEnergy Solutions’ bankruptcy had the measure not passed, they noted.

And some of the allegations outlined by federal prosecutors point directly at FirstEnergy’s leadership. Investigators quote public statements made by Jones, attributing them to the CEO of "Company A Corp." That CEO is said to have spoken to Householder 30 times when the bailout was pending in the Legislature.

Still, it’s unclear whether the company crossed any legal lines in its support of Householder. Many analysts noted that it’s common for utilities to engage in extensive — and expensive — lobbying campaigns. As regulated monopolies, their business is often determined by government policy.

"The bigger government is, the more likely people are to try to influence policy if that is how economic outcomes are to be determined," said Paul Patterson, a utilities analyst at Glenrock Associates. "It is not clear to me that any of the companies have done anything illegal or have broken any of the rules. I haven’t seen the government stating that, and I’m not knowledgeable enough to know."

The laws around dark money groups are murky and untested in court, legal experts said. FirstEnergy could face a campaign finance violation if the government proved it used Generation Now to circumvent caps on contributions to individual candidates.

That is part of what federal investigators allege. They say Householder channeled contributions from Company A to Generation Now that went toward paying staff and political advertisements to support his own reelection bid.

Investigators say $97,000 in contributions from Company A were used to pay for political advertisements supporting Householder. Ohio law caps contributions to individual House candidates or political action committees at $13,292.

The bigger question is whether FirstEnergy’s actions amount to bribery.

To prove that, prosecutors would need to show that the company gave Householder money in exchange for an official act. Yet proving bribery is difficult.

The Supreme Court has narrowed the definition of an official act in a series of rulings in recent years, most notably in a case involving former Virginia Gov. Bob McDonnell (R). He was accused of accepting gifts in exchange for arranging official meetings for the benefactor. The Supreme Court vacated the charge, saying it would criminalize normal political behavior.

"When you take decisions like Citizens United and Bob McDonnell together, it creates a system where it is difficult to prevent political corruption and to enforce the laws against political corruption," said Fischer of the Campaign Legal Center. "Laws are supposed to limit the opportunity for corruption, but the Supreme Court has gutted many of those laws."

Even if the authorities levy a stiff penalty, FirstEnergy likely could afford it. In a recent report, Charles Fishman, a utilities analyst at Morningstar Inc., tried to imagine the worst-case scenario facing the company.

He depicted one scenario in which Ohio regulators forced the company to sell off its three distribution utilities in the Buckeye State. That would amount to 20% of its total revenue, hardly a fatal blow in Fishman’s estimate.

In another scenario, he imagined FirstEnergy being slapped with a fine similar to the $200 million penalty paid by Commonwealth Edison in Illinois, a power company that recently admitted to trying to bribe lawmakers.

"That doesn’t hardly even move the needle of the stock when you’re dealing with a multibillion market cap company," Fishman said. Still, he expressed doubt that the company would be implicated, saying he believed Jones, the CEO, when he said the utility did nothing wrong.

"I think the CEO is an honest guy," Fishman said. "I think he is a straight shooter, I really do."