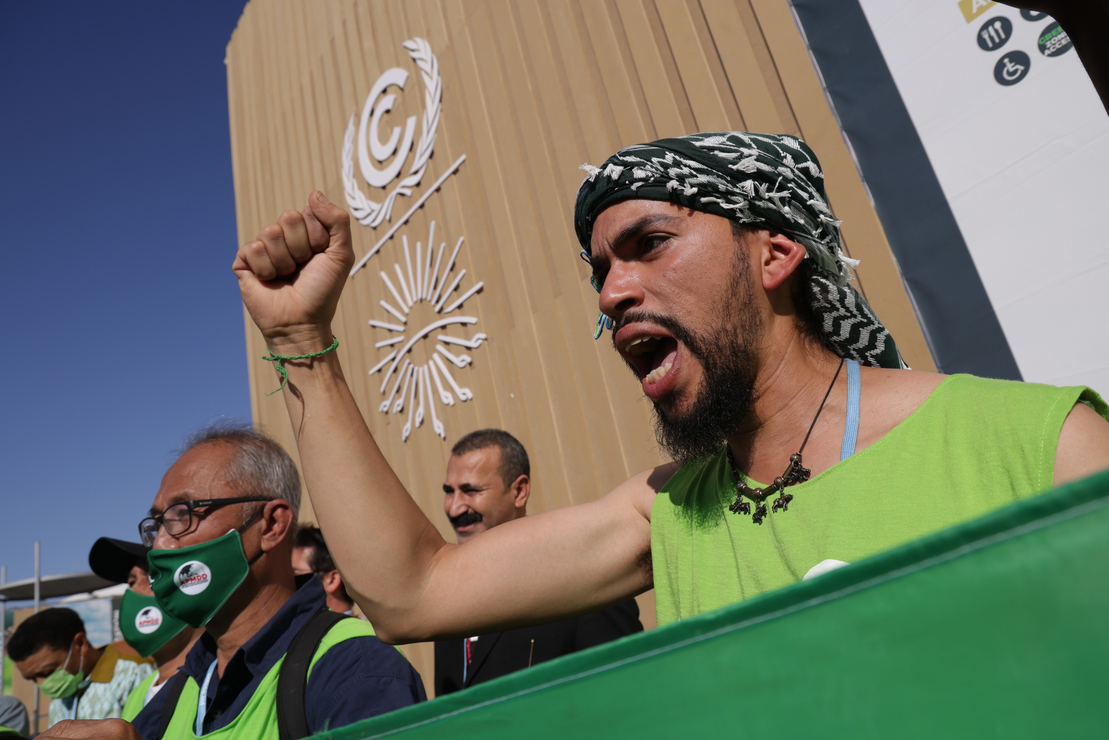 SHARM EL-SHEIKH, Egypt — The world’s most climate-threatened countries won an historic first at climate talks here Sunday — securing a fund that would pay them for the damage wrought by global warming.

But the victory came at a price.

Reaching consensus on the new form of climate aid — or payments for “loss and damage” in U.N. circles — meant bargaining with a small group of petrostates and emerging economies who sought to block the conference from doing much to mitigate global warming.

Those efforts, according to two European officials and an official from the United Kingdom, were led by Saudi Arabia, Iran, China, Russia and Brazil — although none of those delegations could be contacted for comment immediately after the conference.

“We fought hard. And we moved the world on funding for loss and damage,” said Aminath Shauna, environment minister of the Maldives, a country that sits just a meter above sea level.

But Shauna lamented the lack of progress on climate mitigation.

“I am disheartened we did not get there,” she said in her closing statement at the COP 27 climate conference held this year in Sharm el-Sheikh, Egypt.

The final cover text reiterated an agreement from a year ago to phase down coal, but it also opened the door to natural gas. The deal also gave short shrift to an initiative designed to encourage faster action in all countries. As a whole, it barely held to a pact made at the COP 26 conference in Glasgow, Scotland, a year ago.

“We have finally responded to the call of hundreds of millions of people across the world to help them address loss and damage, so this is a defining COP,” said Seve Paeniu, finance minister for the Pacific island of Tuvalu.

But he expressed “deep regret and disappointment” more wasn’t done to stave off future disaster.

‘This is not charity’

They were consistent throughout the two-week summit in their demand for a new and dedicated fund that would provide them with money and resources to recover when flooding destroys farmland and uproots millions — as it did this year in Pakistan — or when sea-level rise eats away infrastructure or contaminates water sources.

“We are not here with cap in hand begging, this is not charity. This is an issue of climate justice,” said Molwyn Joseph, minister of health and environment for Antigua and Barbuda and chair of the 39-member Alliance of Small Island States.

That unified pressure softened the European Union’s position on a fund, said Frans Timmermans, vice president of the European Commission and head of the E.U. delegation, despite the E.U.’s continued misgivings about the fund’s usefulness.

Timmermans put forward a proposal late Thursday that paved the way for a compromise deal that ultimately earned the acceptance of almost 200 countries, including the United States, which had until recently refused to countenance any discussion of financing for climate damage.

The unity of the G-77 also meant there was little organized resistance to efforts to revise the final deal as it related to cutting down emissions or curtailing fossil fuel use.

In the final hours of the talks, the Egyptian presidency presented the loss and damage fund proposal to the room, and with no objections, Egypt’s foreign minister Sameh Shoukry quickly brought down the gavel.

It was accepted, and exhausted negotiators savored a victory that many thought could never happen after decades of intractability from the E.U. and the United States.

Meanwhile, a final draft of the cover decision that dealt with a section on cutting emissions was dropped on delegates in the plenary hall. The Swiss delegation asked for a half-hour to review the document, but it took less time than that to see that developed countries had been outflanked. Their main bargaining chip — walking away from the loss and damage fund if they didn’t get more action on emissions cuts — had already been agreed to.

They sat back down and swallowed the whole thing. Senior U.S. delegates walked from the room almost immediately afterward, not waiting to hear the traditional closing speeches of their peers.

Timmermans reflected on the moral quandary his bloc of 27 countries had faced in trying to pursue their goals against a developing world united on loss and damage.

“This deal is not enough on mitigation. But do we walk away and thereby kill a fund the vulnerable countries … have fought so hard for for decades? No, that would have been a huge mistake and a huge missed opportunity to tackle climate change,” he said in a statement delivered to the plenary.

“We had to give up some of the things we wanted to help other parties and this process to move forward,” Timmermans continued. “But I urge you to acknowledge when you walk out of this room, that we have all fallen short in actions to avoid and minimize loss and damage.”

Island nations, so often the moral voice at the talks, lauded the loss and damage outcome but expressed disappointment on the lack of progress to reduce emissions, highlighting the need to fight for more ambition and cooperation.

“The current text is not enough,” said Kathy Jetnil-Kijiner, climate envoy for the Marshall Islands. “But we’ve shown with the loss and damage fund that we can do the impossible. So we know we can come back next year and get rid of fossil fuels once and for all.”

That leaders here may finally be able to understand the human cost of climate change owes much to the strength of the G-77 — and the conviction that countries were not leaving empty-handed, said observers.

“It shows that on this one common thread where you really have a focus, like on loss and damage, you’re able to deliver,” said Alden Meyer, a senior associate at E3G.

But with climate change advancing, there are only so many such bargains they have available to them.

And future issues are likely to be more divisive, including whether China and other high-income countries such as Singapore and oil-rich Saudi Arabia contribute to the loss and damage fund. Those talks will begin ahead of the climate summit next year in the United Arab Emirates and as countries determine their targets for a new climate finance goal starting in 2025.

A hard-won victory achieved. The hard part still to come.

“We have shown those who have felt neglected that we hear you, we see you, and we are giving you the respect and care you deserve,” said Joseph, the minister from Antigua and Barbuda. “Now we must solidify our ties across territories. We must work even harder to hold firm to the 1.5 [degrees Celsius] warming limit, to operationalize the loss and damage fund, and continue to create a world that is safe, fair, and equitable for all.”