How weakened fuel rules could lead to EV haves, have-nots 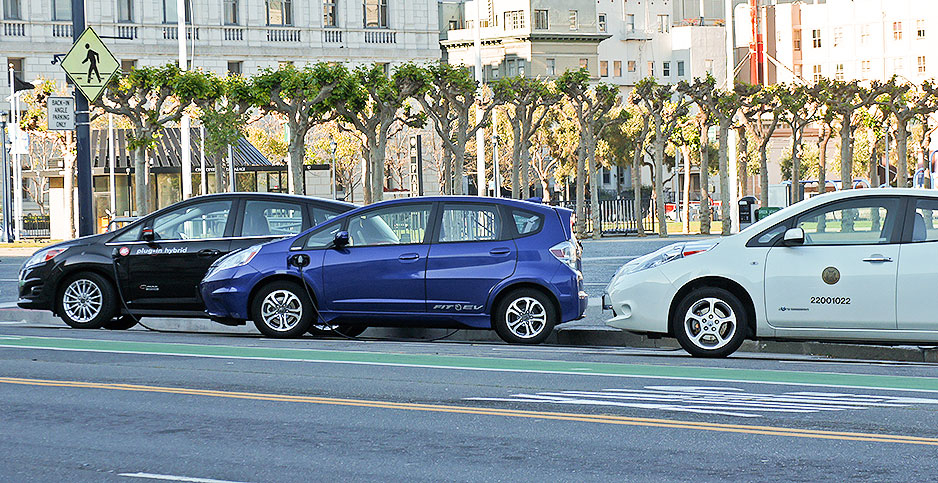 The weakened fuel-efficiency standards that the Trump administration unveiled yesterday arrive at a pivotal time for electric cars and the infrastructure to charge them. Is momentum strong enough to keep them growing as Washington applies the brakes?

The answer may come down to the states, where decisions are made on whether to spend millions of dollars to build charging infrastructure. Some, like California and Massachusetts, seemed poised to zoom ahead, their resolve stiffened by early successes and a desire to clean the air and repudiate the president.

Meanwhile, other states that have few EVs and little infrastructure might find it hard to marshal the local will without a federal ally and fall farther behind.

Electric cars have no tailpipe emissions and have been a part of the fleets that automakers have planned to meet higher fuel efficiency standards. They have also been a pervasive force that aided the states in reducing the greenhouse gas emissions that lead to scorching summers. Without those standards, there is less urgency.

The rollback prompted a outcry in states where EVs are starting to take off. Governors, big-city mayors, environmental and health groups, and 19 state attorneys general issued stern rebukes of Trump and his EPA, which formulated the new proposed rules along with the Department of Transportation.

"For Trump to now destroy a law first enacted at the request of Ronald Reagan five decades ago is a betrayal and an assault on the health of Americans everywhere," said California Gov. Jerry Brown (D) in a statement. "Under his reckless scheme, motorists will pay more at the pump, get worse gas mileage and breathe dirtier air. California will fight this stupidity in every conceivable way possible."

There was less anger in states like Utah, which has a few thousand EVs on the road and where a $1,500 tax credit for the vehicles was discontinued last year.

Now that the president and the federal government have made it clear that fuel efficiency isn’t a priority, it will be harder to persuade state lawmakers, utilities and regulators to pave the way for EVs, said Josh Craft, government relations manager for the nonprofit Utah Clean Energy.

"The demand for significant improvement with electric vehicles is going to tail off," he said.

The federal government’s action yesterday was twofold, and each part is attended by controversy.

It proposed freezing fuel-efficiency standards in 2020, heading off a march toward much more efficient cars that began under President Obama and was supposed to last until the end of 2025. It also revoked California’s long-standing waiver under the Clean Air Act that allowed it to set its own efficiency standards, ones that have been adopted by 12 other states and the District of Columbia.

The Trump administration wants to withdraw the state’s permission to impose the mandate and independent greenhouse gas standards, citing a 1975 law that gave the federal government authority to set an average standard for fuel economy.

Spokespeople from EPA and the White House took pains to characterize the plan as an inauguration of the public comment period. Opponents, including the attorney generals, said they would pursue litigation second.

"People seem to assume this is actually going to happen," said Kathy Kinsey, a policy adviser at Northeast States for Coordinated Air Use Management (NESCAUM), which represents air-quality districts in eight states, from Maine to New Jersey. "This is a proposed rule and we have a lengthy comment period, and EPA will get significant comments on this rule. The rule that emerges may be very different than what’s proposed."

The comment period of 60 days will probably start sometime in the next month, and hearings are expected to be held in Los Angeles, the District of Columbia and Detroit.

"It will be years before the litigation is complete. Frankly, I don’t want to speculate on what will happen, but right now, our states are moving ahead with implementation," Kinsey said.

How the administration and the courts handle the fuel rules will affect two huge industries that are crucial to the electric car future: automakers and utilities.

Utilities in states that are investing in EV charging infrastructure, or are preparing to do so, said the government’s decision would not alter their plans.

"Exelon’s utilities in Maryland — BGE, Pepco and Delmarva Power — strongly support taking steps now to tackle greenhouse gases from the transportation sector, the nation’s largest source of emissions," said Paul Adams, an Exelon spokesman, yesterday. Together with a fourth utility, the three are proposing to spend $104 million to build 24,000 chargers.

Tidings were similar among power companies in California, the state at the center of the controversy. Since 2016, state regulators have approved the three largest investor-owned utilities to spend almost $1 billion on electric vehicle infrastructure, much of it for passenger cars.

"We believe that maintaining current federal fuel economy and GHG standards is extremely important," said Julia Roether, a spokeswoman for Southern California Edison, a main electricity provider in Los Angeles. "In California and many states across the country, we cannot achieve vital air quality and climate goals without increased adoption of electric vehicles."

Automakers yesterday were more welcoming of the Trump administration’s plans.

"At its core, the proposed rule recognizes that assumptions made in 2012 about consumer preferences have fundamentally shifted in 2018," said automaker Fiat Chrysler in a statement.

Whether the United States waters down its standards or not, global automakers face increasingly stringent fuel economy standards in Europe and in China, the world’s largest auto market, where the government requires fleets to include EVs.

Thousands of U.S. utilities, big and small, don’t yet have EV plans in place, and how Trump’s easing of vehicle efficiency standards will weigh against other pressures is unknown.

"From a utility perspective, [electrification] is a huge opportunity for them," said RJ Harrington, an EV charging consultant and business director at National Car Charging, referring to the opportunity to sell more electrons. "There are a lot of wheels already turning."

But, he added, "the last thing we want to do is have anybody invest in assets that then become liabilities. There will be uncertainty. There will be pause buttons that’ll be pushed."