How will Biden’s shifting views on fracking play in Pa.? 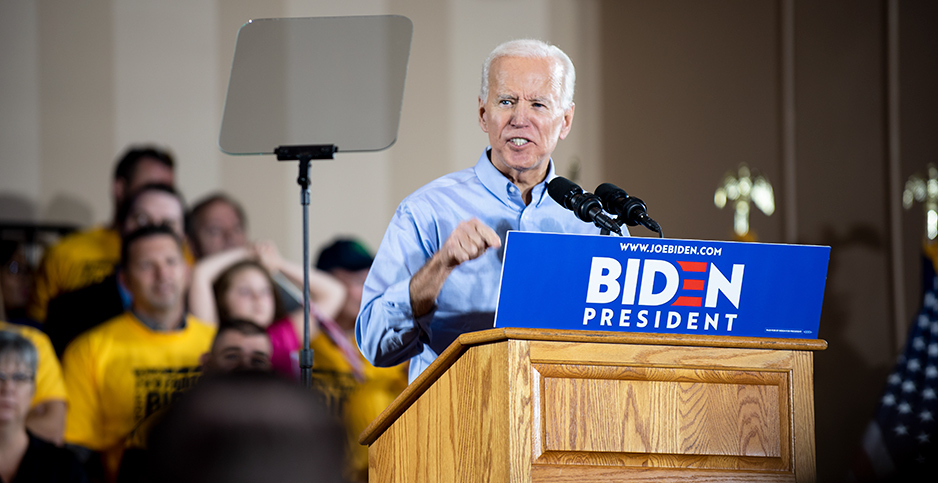 Even though presumptive Democratic presidential nominee Joe Biden doesn’t want to ban hydraulic fracturing, the debate could still haunt him in the natural gas-heavy state of Pennsylvania.

The gas industry, unions and their supporters had warned Democrats against nominating either Sen. Bernie Sanders of Vermont or Sen. Elizabeth Warren of Massachusetts, who want to ban fracking nationwide.

Strategists also feared doing so would put Pennsylvania out of reach for the party, risking a major swing state and its valuable electoral votes.

Biden, the former vice president and a native of Scranton, Pa., has a climate change plan that envisions banning new permits to frack for oil and gas on federal land, but not on private or state land.

"No, I would not shut down this industry," Biden said last month in an interview with Pittsburgh television station KDKA. "I know our Republican friends are trying to say I said that."

But the issue continues to dog Biden. He’s given conflicting statements, like in a March debate against Sanders, where he said "no new fracking" — a statement his campaign quickly walked back, saying he was referring only to federal land.

His policies are also hostile to fossil fuels. He’s promised to reinstate numerous environmental protections President Trump rolled back at the behest of industry, and he wants the nation to reach net zero greenhouse gas emissions by 2050, leaving almost no room for fossil fuels.

Biden’s opponents see that as a liability, an opportunity to paint him as an adversary to natural gas who would ban fracking, eliminating the jobs in the extraction industries and those that rely on it, in contrast to the moderate he’s presented himself as.

The Trump campaign has already been going after Biden on the Green New Deal, which he doesn’t embrace, and fracking.

"Joe Biden has once again flip-flopped on banning fracking, an extreme proposal that would cost 609,000 jobs in Pennsylvania, but as recently as the last Democratic debate Joe Biden proudly promised ‘no more and no new fracking,’" said spokeswoman Sarah Matthews.

"This is part of a pattern of Biden telling workers one thing and promising left-wing activists another. There’s nothing moderate about Joe Biden, and it’s pretty clear that American workers simply can’t trust him to be honest with them about his radical energy plans."

Rep. Fred Keller (R-Pa.), whose district includes a vast portion of northeastern Pennsylvania at the center of the state’s gas production, said Biden would be disastrous.

"Joe Biden’s plan to completely eliminate fossil fuels and ban fracking would destroy this widespread prosperity in Pennsylvania and communities across America," he said in a statement.

"Pennsylvanians are smart, hard-working people. We understand how a Biden presidency would kill jobs, weaken our national security, and once again leave behind the ‘forgotten Americans’ in rural communities who just want to earn an honest living and provide for their families."

Dan Eberhart, CEO of oil field services company Canary LLC and a donor to Trump and other Republicans, said even if Biden doesn’t want to ban fracking, his energy plans are likely to hit the industry hard.

"Biden will be a remake of the same movie: centrist platform, left-leaning actions once in office," Eberhart said.

"He’ll say what people in small communities in Pennsylvania and across the country want to hear," Eberhart continued. "Once he’s in office, his policies will ultimately harm those communities."

During the last decade Pennsylvania has hosted a fracking boom thanks to the Marcellus Shale, which has helped transform the nation into a net gas exporter.

Other states such as Texas and Colorado have seen significant production increases — and accompanying economic bumps — but Pennsylvania, which had very little gas drilling previously, has stood out for the growth it has seen.

Support for fracking isn’t unanimous in Pennsylvania, but it’s strong, particularly in the rural areas that could be key to the election.

A February poll by the Allentown Morning Call and Muhlenberg College found a plurality of voters — 42% — would oppose a fracking moratorium, while 38% would support it.

At the same time, the Keystone State is a crucial election swing state. Most recent presidential contests there have been decided by a few percentage points. Democrats won in each race between 1992 and 2012. In 2016, however, Trump narrowly defeated Democratic nominee Hillary Clinton by roughly 43,000 votes.

But the former vice president’s fracking issues, and how they’ll play out at the ballot box, might be overstated.

"Biden has made a career of empathizing with working class voters, who are ever so important in Pennsylvania presidential politics, especially times of economic downturn," said Jeff Brauer, a political science professor at Keystone College.

“Ultimately, Biden is a pragmatist, particularly with working-class issues.”

"Ultimately, Biden is a pragmatist, particularly with working-class issues. That pragmatism will be on full display in the general election campaign given the current situation," Brauer said of the COVID-19 pandemic and resulting economic pain.

He predicted Biden might move toward the center with some of his policies to seek out more moderate and conservative voters.

The constituencies likely to matter to Biden’s run in the state appear to believe he wouldn’t ban fracking.

"I think he’s got a reasonable approach, a long-term approach that doesn’t mean people will be laid off tomorrow," said Rick Bloomingdale, president of the Pennsylvania AFL-CIO. "He’s not going to ban fracking, except on public lands, and that’s OK."

Trump, on the other hand, "has not been good for workers and labor," Bloomingdale said, adding he predicted many union members who voted for Trump in 2016 would "reevaluate" come November.

Biden continues to have the support of key Democrats like Rep. Conor Lamb (D-Pa.) and Allegheny County Executive Rich Fitzgerald, who have cited Biden’s fracking stance in backing him.