How will EPA show deaths from soot? 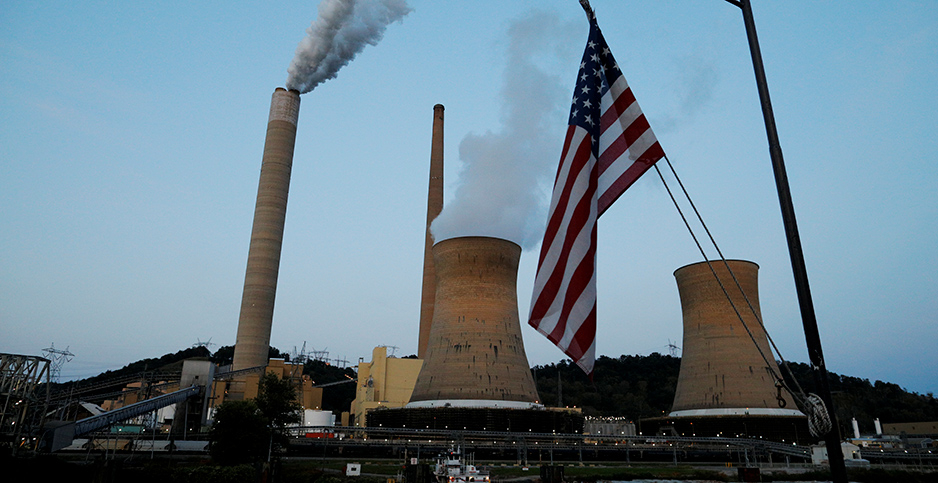 The U.S. flag flies on a tugboat as it passes American Electric Power Co.'s Mitchell power plant, a coal-fired plant along the Ohio River in Moundsville, W.Va. Brian Snyder/Reuters/Newscom

How many people might die from air pollution? The answer should become clear today when EPA releases its revamped rule affecting carbon dioxide emissions at power plants.

How the agency accounts for deaths associated with fine particulate matter has been an open-ended question since EPA acknowledged last year that its proposal to replace the Clean Power Plan, an Obama-era climate rule, could result in 1,400 additional premature mortalities a year.

EPA air chief Bill Wehrum has said the final version being made public this morning will include changes to the methodology that EPA has used for decades to tally the impact of fine particulate matter, or PM2.5. But it’s unclear how the agency will recalculate health risks from soot that include asthma and heart disease.

"People die early from exposure to particulate matter," said Gretchen Goldman, research director at the Union of Concerned Scientists’ Center for Science and Democracy. "That fact is well-established in the scientific literature, but it is very inconvenient if you are someone who wants to deregulate. So the administration is working on all kinds of creative ways to dismantle that math and make it work out in their favor."

The initial proposal for the rule being released today, named the Affordable Clean Energy rule, or ACE rule, left grim questions about the agency’s math.

The regulatory impact analysis, or RIA, used the methods that EPA scientists have relied on since the dawn of the Clean Air Act. It found that the retooled rule could result in as many as 1,400 additional premature deaths each year by 2030 when compared with President Obama’s rule.

The RIA released last August shows a range of potential mortality, and it pointed to a 2012 Harvard University study that, when applied to the rule, found that ACE could save up to 200 people from premature deaths related to power plant soot. It also noted that the Clean Power Plan might have saved as many as 1,600 people.

Today’s rule will show how EPA plans to address that potential public relations problem. It might omit the benefits of cutting PM2.5 below EPA regulations. It could also swap a baseline used by the Obama administration for another one, on the grounds that the Obama rule was never implemented.

"I think in the end, the rule’s going to be based on this notion that there aren’t any significant benefits to be had by shutting power plants down," said Steve Milloy, who served on President Trump’s transition team.

The RIA isn’t part of the legal justification for a Clean Air Act regulation. Instead, it’s the agency’s public pitch for why the rule is worthwhile and how its benefits outweigh its costs.

Staff scientists carry out the analyses with minimal input from political appointees.

But during the Obama administration, congressional Republicans charged that so-called co-benefits — or a rule’s collateral reductions to pollutants that affect public health — were being used to inappropriately prop up rules.

Figures for the health benefits related to reducing fine particulates were cited in Obama-era regulations for carbon, mercury and ozone, as they had been in earlier administrations. Smokestack emissions threaten respiratory and cardiovascular health and can even cause death among vulnerable populations. The preponderance of research shows it poses some risks even at levels that comply with EPA regulations.

But Republican lawmakers protested that these analyses assumed benefits even when pollution dipped below EPA’s own standards for PM2.5. When Trump took office in 2017, Republican members of Congress urged his EPA to stop counting co-benefits. Republican members of the Senate Environment and Public Works Committee asked agency officials to review rules that "rely on such purported benefits."

Milloy, who is not a scientist, argues that outdoor PM2.5 doesn’t pose a threat to human health under any circumstances — "even in the most polluted areas of China." He pointed to a study by two current members of EPA’s Science Advisory Board, Richard Smith and Stanley Young, who found no increased daily mortality rate from PM2.5 and ozone exposure among a cohort in California.

But even if soot does pose dangers, he said, the Clean Air Act makes it "illegal" for EPA to set limits at levels that don’t protect public health. So the agency shouldn’t be able to find health benefits below that level.

But John Bachmann, EPA’s former associate director for science policy and new programs, said that while there have been some individual studies that don’t show PM2.5 exposure contributing to premature death, the majority do.

Throughout the history of Clean Air Act implementation at EPA — "and I lived that history," he said — agency scientists have been clear that’s there no safe level of particulate matter, no matter how small.

"There is not a level with zero risk," Bachmann said.

As for the well-worn practice of assessing health impacts below the level set by the PM2.5 standard, Bachmann said that was settled by the Supreme Court in Whitman v. American Trucking Associations in 2001.

"It has been well-litigated, so he’s full of shit," Bachmann said, referring to Milloy. "And you can quote me."

The way EPA staff during Democratic and Republican administrations have estimated the unknowable public health risks of ambient pollution below EPA’s standard is by assuming that there is a linear relationship between PM2.5 concentrations and health impacts. Even low levels of pollution will cause low rates of illness, they assumed.

But experts say there may be more precise and useful ways to measure the link between emissions levels and illness. EPA is putting together an expert panel to weigh different methods of assessing the health impacts of PM2.5 (E&E News PM, June 12).

A proposed alternative to the linear methodology appeared in the RIA when ACE was proposed last year, but it was taken out by the White House Office of Management and Budget. It’s unclear why that occurred.

"I think the issue is that OMB looked at it and said this is not ready for prime time," said Goldman of the Union of Concerned Scientists.