How will Greta Thunberg get to Madrid? 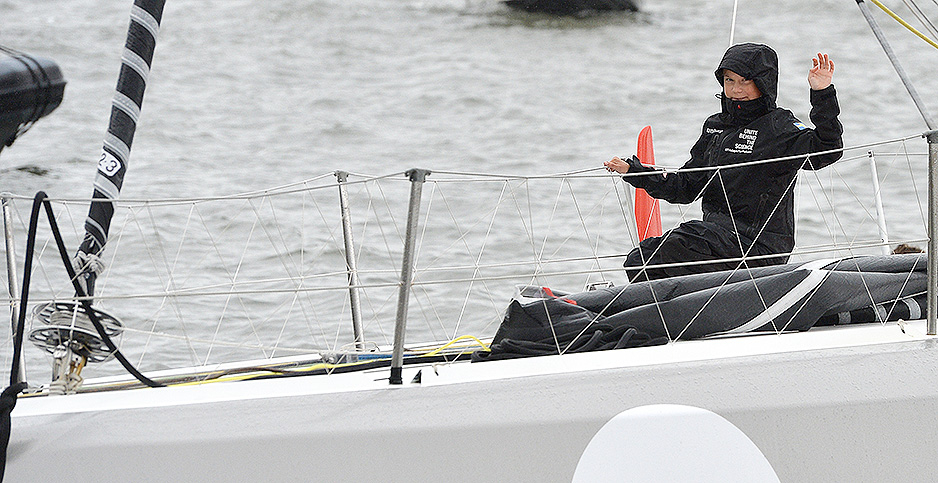 Swedish teenage climate activist Greta Thunberg traveled across the Atlantic on a sailboat in August. She hasn't said how she'll travel to Madrid for a global climate conference. Anthony Behar/Sipa USA/Newscom

Greta Thunberg is confronting a big challenge besides climate change.

The Swedish climate activist traveled halfway around the world to attend U.N. climate talks in Santiago, Chile, only to learn that the talks had been moved at the last minute to Madrid.

"As #COP25 has officially been moved from Santiago to Madrid I’ll need some help. It turns out I’ve traveled half around the world, the wrong way:)," Thunberg wrote on Twitter last week to her 2.9 million followers.

"Now I need to find a way to cross the Atlantic in November. … If anyone could help me find transport I would be so grateful."

Thunberg, who boycotts air travel because of its outsized carbon footprint, took a zero-emissions sailboat across the Atlantic Ocean this summer to attend a climate conference in New York (Climatewire, July 30).

After leaving New York, the teenage activist originally planned to travel around North America by bus, train and other low-carbon forms of transportation, eventually making her way to the U.N. climate talks in Santiago.

But her plans were upended when Chilean President Sebastián Piñera announced last week that Santiago would not host the talks due to civil unrest, including massive protests over economic inequality (Greenwire, Oct. 30).

Clean transportation experts said that if Thunberg remains steadfast in her commitment to avoid flying, she won’t have an easy time getting back across the Atlantic in a climate-friendly way.

"In her particular case, there aren’t that many options, given that time is very short," said Anup Bandivadekar, a program director and regional lead with the International Council on Clean Transportation.

"There may not be the option to take another zero-emissions sailboat or yacht with an experienced crew to guide such a long journey."

"It really is a big challenge because it’s last minute," Gilliam said. "It’s not going to be as easy to find a boat as last time. There could have been sailboats that were going back across the Atlantic, but actually, it’s a really bad time to go across the Atlantic from the U.S. to Europe. It’s really stormy."

One potential option would be for Thunberg to hitch a ride on a cargo ship, Gilliam said. Since the vessel would be making the trip anyway, the activist wouldn’t be responsible for any additional greenhouse gas emissions from the voyage.

But it’s uncommon for cargo ships to accept passengers, she said. More problematic is that cargo ships’ smoke stacks belch out black carbon, which has a warming impact on the climate that is 460-1,500 times stronger than carbon dioxide.

"We mustn’t green wash cargo ships. They also need to decarbonize," Gilliam said. "So if she were to ride on a cargo vessel, I would hope that she talked about the need to transition toward sustainable shipping."

If Thunberg changes her mind about flying and decides to hop on an airplane, she could face criticism from supporters of the "flight shame" movement.

The burgeoning movement, which originated in Sweden, encourages people to boycott air travel due to its outsize climate impact.

Supporters note that the average round-trip flight from Washington, D.C., to San Francisco produces around 0.9 metric ton of carbon dioxide. That’s equivalent to one-fifth of the greenhouse gases that the average American car produces in a year.

To mitigate the impact of her flight, Thunberg could purchase carbon offsets. Those would allow her to support projects that reduce greenhouse gas emissions elsewhere in the world, such as efforts to install solar panels or plant trees in the Amazon rainforest.

But offsets remain controversial among clean transportation experts, with some saying they aren’t guaranteed to deliver lasting benefits. A recent investigation by ProPublica found that many forestry preservation offsets in Brazil were not reducing emissions as intended (Climatewire, Sept. 10).

"I concluded a while ago that [offsets] are just a way of salving your guilty conscience," Andrew Scott, head of the climate and energy program at the Overseas Development Institute, previously told E&E News.

Gilliam said: "I don’t see offsetting as a solution. The majority of offsets don’t actually remove the greenhouse gases that they claim they do."

‘More power to her’

Regardless of how Thunberg reaches Madrid, her quest to travel there in a sustainable manner is fostering a broader dialogue about sustainable transportation.

It’s also opening her up to more criticism from conservatives, who have variously criticized the teenager as a "puppet" of the left and a "full-blown tool of adults." Other ad hominem attacks have homed in on her autism and speaking style (Climatewire, Aug. 9).

In response to Thunberg’s tweet last week, one critic wrote: "Over 100 years ago, humans developed a new technology called the airplane. They run off fossil fuels and can get you to Madrid in a few hours. If you attended school, you might have learned this."

He added, "I just flew from Denver to Washington DC in less than three hours. No superstition based trauma or guilt. I will be doing everything I can to prevent future generations from being abused the way Greta has been by unscrupulous adults."

Bandivadekar, of the International Council on Clean Transportation, said this criticism is "unfounded" and assumes Thunberg is asking others to change their individual behavior to combat climate change. But her ultimate goal is to get policymakers and large corporations to confront the seriousness of the problem.

"Her message is not targeted at others to change the way they live," Bandivadekar said. "Rather, it’s targeted at the leadership around the world to start taking climate change far more seriously than they have been taking it.

"And in that, she has been incredibly effective. So more power to her."