How will Pete Buttigieg sell Congress on infrastructure? 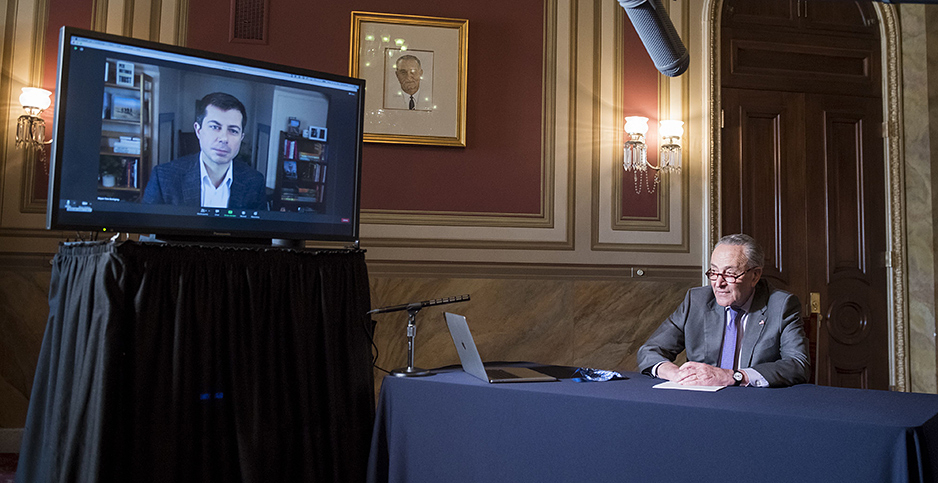 If the Senate confirms Pete Buttigieg as Transportation secretary, analysts and observers say the former mayor and past presidential candidate will need to polish his negotiating skills.

Buttigieg, whom President-elect Joe Biden tapped to lead the Department of Transportation last month, will likely have to convince skeptical lawmakers on Capitol Hill to back a green infrastructure package — no easy feat.

"Whether or not he will be a good negotiator, it’s hard to tell," said Beth Osborne, director of the advocacy group Transportation for America and a former aide to Senate Environment and Public Works ranking member Tom Carper (D-Del.).

"I think we’ve all seen his skill in explaining things, breaking things down and debating skeptics," Osborne said. "So those are certainly good signs. But we’ll have to wait and see how it applies in Congress."

Biden is expected to make a green infrastructure package a top priority in the first 100 days of his administration (E&E News PM, Nov. 12, 2020). The measure could draw from the "Moving Forward Act," H.R. 2, a $1.5 trillion infrastructure bill that passed the House last summer but stalled in the Senate. And if past is prologue, Buttigieg will be a key face of the push on Capitol Hill.

"After hundreds of Congressional meetings, two bus tours, visits to 43 states and so much uncertainty — and 36 short term extensions — it has been a long and bumpy ride to a long-term transportation bill," Foxx said in a statement after Obama signed the FAST Act into law in 2015.

This time around, Buttigieg could have an important advantage over Obama’s second Transportation secretary, Osborne said.

While Foxx was the former mayor of Charlotte, N.C. — population 872,000 — Buttigieg is the past mayor of South Bend, Ind. — population 102,000. That could help Buttigieg win over Republican lawmakers who represent more rural areas.

"One of the great things that Mayor Pete has going for him — I guess I should call him Secretary-designate Pete now — is that he doesn’t come from a large city," Osborne said.

"When someone from a town like South Bend says things, it all of a sudden sounds relevant to a much larger swath of the country," she added. "The message can be identical. The messenger changes how it’s heard."

Any infrastructure bill will have to go through the Senate Environment and Public Works Committee, where Sen. Shelley Moore Capito (R-W.Va.) is in line to become the top Republican member.

"I think the bigger question is, does the fact that the White House changed hands change the dynamics of the Senate strategy?" said Gribbin, who’s now a nonresident senior fellow at the Brookings Institution.

Republican members of the EPW panel may be less willing to compromise on key issues with a Democratic president, Gribbin said.

And even under Trump, lawmakers clashed over how to pay for an infrastructure bill, whether by raising the federal gasoline tax or implementing a fee on vehicle miles traveled.

"From a strategic standpoint, it might make it difficult not just for the chair, but for the members of the committee, to be so accommodating," Gribbin said.

Buttigieg, who was a frequent talking head on Fox News during the election, has continued to hit the cable news circuit since being tapped to lead DOT. Along the way, the former mayor has offered important clues as to how he would approach infrastructure and climate policy.

In a Dec. 20 interview with CNN, for example, Buttigieg vowed to engage with a broad coalition of groups on the issue, including organized labor.

"I’m looking forward to joining the team that President-elect Biden is assembling and working with folks around the country, business, labor, environmental groups and, of course, with Congress to actually get something done," he said.

"A deal is not just possible — it’s necessary," he added. "Americans shouldn’t settle for less than our peers around the developed world when it comes to the infrastructure resources that we really count on."

In a subsequent interview with MSNBC on Dec. 23, Buttigieg said he views climate change as one of four pillars of infrastructure policy, along with safety, equity and jobs.

"When it comes to climate, again, in many ways that’s a safety issue, too," he said. "It’s certainly an issue about whether we’re going to have a safe and prosperous future. And that depends on having cleaner, greener, better ways to get around the country."

The pair discussed an infrastructure bill as well as Schumer’s "Clean Cars for America" proposal, which would provide cash incentives for drivers to trade in their old gasoline-powered cars for new electric vehicles (Greenwire, Dec. 30, 2020).

"I am one who has believed that we need a big, bold and green infrastructure bill. And now we will have an effective ally in the administration and the personages of Pete Buttigieg to help get that done," Schumer said at a brief news conference before the meeting.

Besides Schumer, Buttigieg has spoken in recent weeks with Todd Hauptli, the CEO of the American Association of Airport Executives, and a group of mayors including Eric Garcetti of Los Angeles and Lori Lightfoot of Chicago.

The Senate runoff elections in Georgia today will have a big impact on both infrastructure negotiations and Buttigieg’s confirmation process.

If Democrats Raphael Warnock and Jon Ossoff both win their races against Republican incumbent Sens. Kelly Loeffler and David Perdue, respectively, Democrats would regain control of the Senate and Schumer would become majority leader.

In that scenario, Congress could conceivably pass a green infrastructure package with robust climate provisions, including new programs aimed at reducing greenhouse gas emissions from transportation.

But if Loeffler or Perdue prevails, a climate-friendly infrastructure bill could be dead on arrival under the continued control of Majority Leader Mitch McConnell (R-Ky.), who has derided the Green New Deal and other Democratic proposals to reduce dependence on fossil fuels.

Regardless of the balance of power on Capitol Hill, however, Buttigieg is expected to cruise to confirmation as the first openly gay member of a presidential Cabinet, multiple sources said.

"I expect that his confirmation will be fairly straightforward. I don’t see it being an issue," said Kevin DeGood, director of infrastructure policy at the Center for American Progress, a left-leaning think tank.

Norman Anderson, the chairman and CEO of CG/LA Infrastructure, a firm that advises public- and private-sector organizations, echoed that sentiment.

"I think it’ll be smooth enough. All the antagonism to Buttigieg is on the left, you know, McKinsey and his clients," Anderson said, referring to Buttigieg’s past work at the consulting firm McKinsey & Co., where he represented a variety of clients including Best Buy Co., the Department of Defense and EPA.

"They’ve got bigger fish to fry in terms of [Office of Management and Budget director nominee] Neera Tanden and all of that," he added. "There’s always a sacrificial lamb, and it’s Neera Tanden this time."

Buttigieg’s nomination would have to be approved by the Commerce, Science and Transportation Committee before heading to the full Senate.

Asked for comment, a spokeswoman for the Commerce Committee said in an email to E&E News: "The Commerce Committee will conduct a thorough examination of all nominations within its jurisdiction, and [Chairman Roger Wicker (R-Miss.)] looks forward to reviewing Mr. Buttigieg’s qualifications."