How will Pruitt exit? Riding high unless Trump fires him 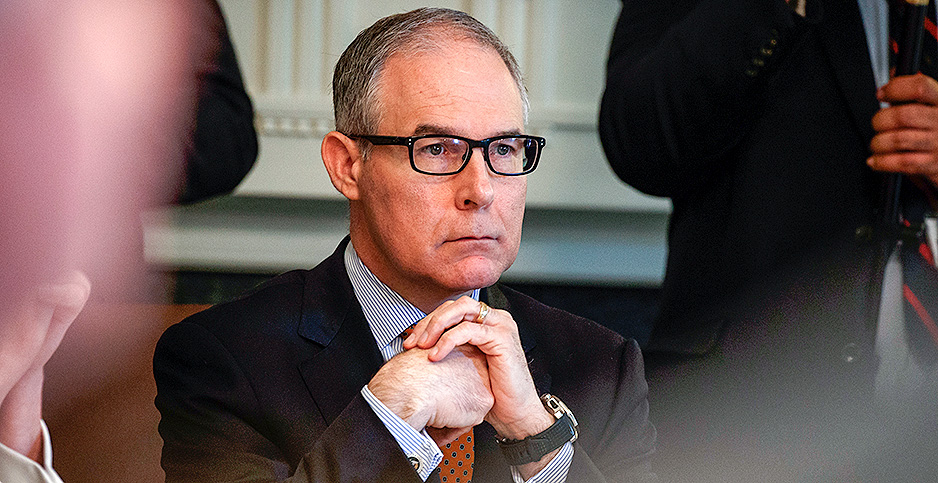 When Scott Pruitt’s tenure ends, he might head to the hills of Oklahoma, but it’s unclear whether the Sooner State would give him another shot at elected office.

The EPA administrator is at the center of a host of scandals involving his use of taxpayer cash and management of his agency. So far, President Trump has offered support for his embattled EPA chief, even as a growing number of Republicans and conservative media figures call for Pruitt’s ouster.

Few political observers believed that Pruitt — who’s widely thought to aspire to a higher office — would stick around for Trump’s full term. But how he leaves EPA might affect his prospects.

"It all depends on what happens to him at the EPA," said Frank Keating, a former Republican governor of Oklahoma. "If he serves and resigns early and resigns at the time the administration ends, then obviously there would be no negative. On the other hand, if the president dismisses him, then that could be a very serious negative if he were interested in a political life in Oklahoma."

Pruitt’s credentials in Oklahoma are solid because of his deregulatory actions that benefit the oil and gas industry, Keating added. And Pruitt’s tenure as attorney general and as a state senator have already proved he can win over voters there.

For his part, the EPA chief has largely brushed off the allegations, insisting that his critics on the left are exaggerating controversies because he’s been effective at dismantling policies they hold dear.

But Pruitt could be in for a long summer.

The near future holds more potentially embarrassing revelations. There are more than a dozen watchdog investigations into Pruitt, and the results of some of those probes will begin rolling out this summer.

What’s more, there are potentially more damaging EPA emails that have yet to be made public. The thousands of emails released to the Sierra Club and the Natural Resources Defense Council after the groups successfully sued for them have yielded dozens of difficult headlines. Those include using ex-lobbyists to plan foreign trips, meeting with an accused sex abuser who also rejects climate science, and tasking aides to find him an apartment and a job for his wife. Those emails largely cover 2017, and green groups are already seeking 2018 emails.

If Pruitt feels embattled now, he should wait until November, when Democrats could reclaim the House. That would mean many Pruitt appearances before investigative committees, said Rep. Don Beyer (D-Va.), a Pruitt critic and member of the House Science, Space and Technology Committee. Beyer said Pruitt has made history with the number of investigations into his behavior, and yet Republicans have not held an oversight hearing on Pruitt’s ethical lapses. That could dramatically change in November.

"Congress is embarrassing itself by failing to engage in oversight, its basic duty," he said in a statement. "If Democrats were running these Committees, or if we run them in the future, Scott Pruitt should expect extensive scrutiny of his actions as head at the EPA. I have no doubt that a hypothetical Democratic majority would hold Pruitt fully accountable for any misconduct it uncovered."

Other politicians who stepped down amid controversy have snagged lucrative jobs afterward.

Take the case of former Rep. Blake Farenthold (R-Texas), who resigned in April after it was revealed he spent $84,000 in taxpayer money to settle a sexual harassment lawsuit. Farenthold, who claimed he would pay back the funds but has yet to do so, became a lobbyist. He’s now making $160,000 as a legislative liaison for the Calhoun Port Authority in Texas.

There is always a big Washington, D.C., law firm willing to pick up someone like Pruitt, regardless of scandals, said David Schnare, who was a part of the Trump administration’s EPA landing team. Schnare, who left the EPA after clashing with Pruitt and his political appointees, said Pruitt is highly unpopular in Washington, with Democrats as well as some Republicans.

That means Pruitt’s future is in Oklahoma, where D.C. criticisms can be an asset, Schnare said.

Pruitt can forget about another Senate-confirmed position, such as being a possible successor to Attorney General Jeff Sessions, said Myron Ebell, director of the Center for Energy and Environment at the Competitive Enterprise Institute and the head of the Trump administration’s EPA transition team. His nomination to any other Cabinet position "would go down in flames in the Senate," Ebell said.

However, retreating to his base will be a place for Pruitt to land, he said.

"I don’t think Washington has treated him very well, so my guess is he goes back to Oklahoma and runs for office," Ebell said. "My guess is that he goes back to where his base is and doesn’t give up on elected politics. I think it’s a big deal here, but it doesn’t have much impact in Oklahoma, I’m sure his opponent in any election he might choose to contest would bring it up, but my sense is it doesn’t resonate very much and over time it will die down."

But politics is not always so forgiving, said Schnare, who added that Pruitt won’t necessarily survive a barrage of ads slamming him for the allegations he’s faced at EPA. There are also investigations of relationships with lobbyists and sweetheart housing deals back in Oklahoma that voters may not be willing to overlook, particularly in a primary where he is running against another Republican. The safest bet for Pruitt for a place to land is in the oil and gas industry, which considers Pruitt a dear friend, Schnare said.

"From a political point of view, I think he has fallen on his own sword. I don’t think he can recover, and it wasn’t just the stuff he’s done stupidly here," Schnare said. "I think it’s also true with a bunch of stuff he’s done down there that’s still being investigated. So his solution is going to be waking up some morning, and his wife is poking him in the ribs saying, ‘Honey, you’re never going to be president of the United States, so stop it. Go get a job and build some money so that we can afford to live.’ And it will be, I’m guessing, his place will be working for oil and gas down in Oklahoma. I mean, what else is he going to do?"