How women are reaping benefits from Africa’s solar revolution 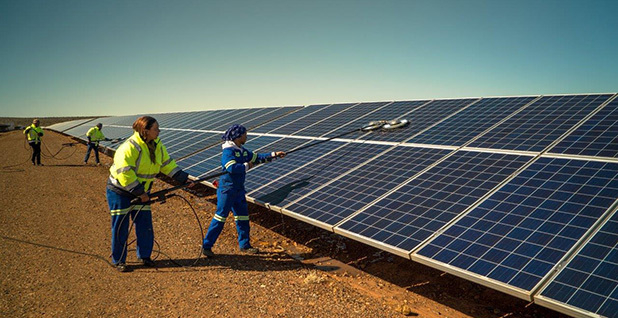 For girls in Berta Massawe’s Tanzanian village of Kibosho, every day was a race against the clock — or, more accurately, against the sun.

When it was dark in this village on the slopes of Mount Kilimanjaro, it was dark. There were no streetlights or headlights to break up the night. Work and study were impossible except by candle or kerosene lamp — when they were available. If thieves came to steal livestock, and they did, there was little a family could do to stop them.

Boys like Massawe’s two brothers had chores to do, too, but they usually involved moving their families’ goats and cows from one pasture to the next and feeding them. They were finished before the sun went down and had more hours to study. Ritha Tarimo, director of M-Power Academy in Arusha, Tanzania, said it’s a common story.

"It is really a struggle, especially for female children," said Tarimo, who grew up in much the same kind of Kilimanjaro town herself before moving to the city as an adolescent. "Because they have to really help with the house chores. So by the time they finish, it is 9 at night and it’s hard to sit down to study."

Renewable energy deployment in Africa is still very new, and it’s still a story told more in anecdotes than statistics. More than 600 million Africans — or 60 percent of people on the continent — still have no access to electricity. In countries like Massawe’s Tanzania, that number climbs to 80 percent or higher. Even Africans who do have power frequently don’t have it 24 hours a day, or don’t have enough to maintain the kind of lifestyle the Western world takes for granted, like householdwide lighting.

In areas that remain underserved, the gender implications are clear. The World Bank says 70 percent of those suffering from energy poverty are women and girls, who experts say are less likely to migrate to urban centers — where electricity is more available — in search of work.

But those who work in Africa see grid-connected as well as mini- and off-grid solar beginning to penetrate into new areas of rural Africa, where women and girls spend a greater share of their time. Solar is a particularly good fit, they say, because the resource is abundant in Africa and because it does not require the expansion of transmission infrastructure that would be needed to support larger fossil-fuels-based facilities.

"This means that people who live way off the grid and will probably not in their lifetime see that wire go over their roof are able to immediately today get access to electricity that opens up this transformation for them," said Katherine Lucey, co-founder of the social enterprise Solar Sister. She said access to power can be particularly transformative for women.

For girls like Massawe, having even a single light bulb in the house means they can study after dark. Social life doesn’t have to end when the sun goes down, and women can start small businesses that require refrigeration or evening work.

The new industry is also an opportunity for women to work outside the home.

"It’s a new industry that allows new participants to show up shoulder to shoulder with everyone else," said Kevin Smith, CEO of SolarReserve, a California-based utility-scale solar company that operates three solar photovoltaic utility-scale plants in South Africa. "Everybody’s at the same skill level. Everyone has the same training requirements."

The ‘Avon of solar power’

In South Africa, much of the country’s solar energy supply is from commercial-scale facilities, thanks in part to the Renewable Energy Independent Power Producer Procurement Programme, which gave private investors a stake in renewable energy while fossil fuels plants remain state-run.

But other countries in less developed parts of the continent aren’t connected to the grid, and growth in the solar sector is mainly off-grid. Women have found employment selling and installing rooftop-to-rooftop solar equipment, either as employees of larger enterprises or as independent contractors.

Neha Misra, who co-founded Solar Sister with Lucey, said she tries to cultivate village women to play the dual rule of solar evangelist and "mobile Best Buy" in their communities.

"We’re deliberately including women as part of the clean-energy chain, and really changing the narrative from ‘oh, these poor women, they’re victims’ to women as change agents," she said.

Solar Sister’s model is to recruit, train and mentor African women — they currently operate in Uganda, Tanzania and Nigeria — who earn a markup for selling a catalogue of solar energy and clean cookstove equipment. Solar Sister negotiates with the manufacturer on behalf of the women and offers what Misra calls "ongoing mentorship" and sustained training.

The product line is tailored to the consumer base. A new addition in Uganda, for example, is a light that attaches to a fisherman’s net to help increase the catch.

It’s often the first job for these entrepreneurs, who now number 2,200, Misra said, allowing them to pay a child’s school fees or supplement the proceeds of a family farm.

"Think of us as the Avon of solar power," said Misra. "Instead of selling lipstick, we’re selling solar and clean cooking technologies. Which I think is another way of being beautiful — instead of lipstick, you can see your face," she said, referring to the smoke and fumes from traditional kerosene lamps the products help avoid.

Misra has some limited experience with energy insecurity from growing up in Delhi, India, where brownouts in her middle-class apartment building forced her to study by candlelight. But she says she didn’t know what living off the grid was like until she visited the Sundarbans in eastern India as a young energy economist researching the effects of rural electrification in South Asia for a think tank.

Misra’s work as an economist and researcher eventually brought her to the United States, where she found herself splitting time between attending high-level events — including meetings of the U.N. Framework Convention on Climate Change — and visiting villages "where people do not have a single light bulb."

The dichotomy between the two began to wear on her, she said, especially as the high-stakes round of U.N. talks in 2009 in Copenhagen, Denmark, approached. The world seemed to be investing so much in a search for what Misra calls a "boomerang" solution to climate change, and not nearly enough in using existing technologies to help the world’s poor transition out of poverty while safeguarding the environment.

"I was absolutely disenchanted with the lack of progress on the international climate negotiations from the perspective of injustice," she said. High-level dialogue is not doing its job, she said, "when we are on the verge of sending space tourists and a woman in a village does not even have a light bulb."

Misra said she became more interested in getting the woman her light bulb than in preparing for Copenhagen. She left her job at a U.S.-based energy economist and joined Lucey, a former investment banker, to form Solar Sister.

The two started the organization with their own savings, but sales help sustain it. It also has received backing the U.S. Agency for International Development and the State Department’s wPOWER program, which aims to expand opportunities for women in renewable energy. They say it costs about $500 to train a woman and get her started as one of their entrepreneurs.

"If you don’t have access to electricity, you really can’t move forward; you’re stuck in this cycle of poverty," Lucey said. "Our lives are powered by electricity, and when that’s missing, so much of your time and energy is consumed by that lack."

Inclusion from day one is key, experts say

While renewable energy is broadly seen as a win for African women, those who work in the space emphasize that it matters how programs are structured.

Development banks, U.S. foreign aid agencies and international nongovernmental organizations are tailoring their African electrification programs to involve women, and to ensure that traditional African power roles don’t reassert themselves in the programs they fund.

Anne Kuriakose, senior gender specialist with the World Bank’s Climate Investment Fund, said a concerted effort is required from the very beginning to ensure women are involved in projects and have access to their benefits.

"If you’re not systematically including women in consultations, you might not end up with the sorts of exploitation uses that they’re interested in," she said. For example, women might benefit from having a village mill or an obstetrics clinic powered by renewable energy, but if they’re not included in decisionmaking, their needs might not be considered.

Developed-country support for projects to electrify Africa through renewable energy has increased sharply over the last few years.

The Obama administration launched its Power Africa initiative in 2013, with the aim of doubling power access to Africa. The administration says it is already responsible for bringing power to 60 million people.

Though the overall employment story remains murky, those who work in off-grid energy say that’s more a failure by agency-backed researchers to keep up with the trend than a reflection of conditions on the ground. The latest report by the International Renewable Energy Agency states that "renewable energy-related employment remains low in Africa except in a few countries, like Kenya, Morocco and South Africa, where deployment growth is creating domestic value and jobs."

Her time to be a superhero

Back in Arusha, Tanzania, Tarimo says she applied for her current role running the M-Power Academy for a household solar equipment retailer called Off Grid Electric because she wanted to make a difference.

"The rate of unemployment in our country is actually heartbreaking, and I thought if I joined, I could play a role in reducing unemployment," said Tarimo, who ran a language and cultural school in Arusha before taking the M-Power Academy job. "I have always wanted to be a superhero, and I thought maybe it was my time."

Tanzania’s official rate of unemployment is 11 percent, but that includes even very sporadic seasonal employment. And women are particularly disadvantaged when they leave home in search of work.

Massawe, who would eventually become a student of Tarimo’s at the academy, struggled to find employment after graduating from Mzumbe University in eastern Tanzania.

"For us women in Tanzania, we are not given priority in many places," said Massawe. "When you go to interviews and there are males and females, males are given priority more than females."

After a string of fruitless interviews, she answered an ad for Off Grid Electric, traveling the 80 miles from Kibosho to Arusha for the interview.

She was hired and sent through a one-month professional development training course at the academy Tarimo runs before beginning work at its call center, where she has been now for more than a year.

Massawe says her training and the work she has done since have given her confidence. She hopes to one day become an Internet technology manager.

"I want to become a person who can help others," she said.