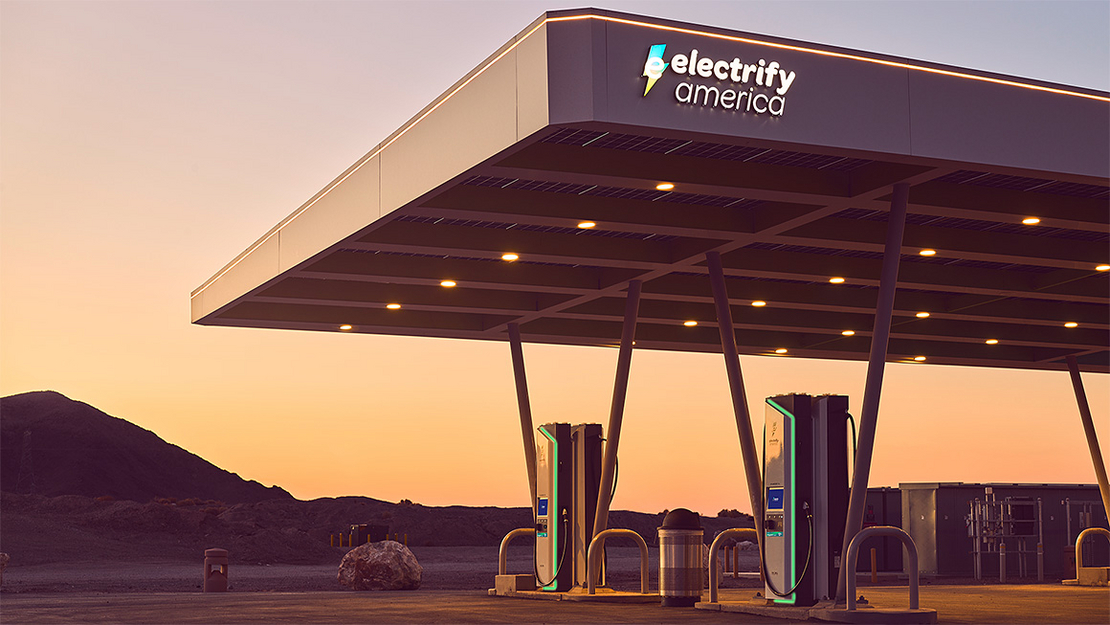 Electrify America, a charging-network operator, has attached a giant battery to its electric vehicle charging station in a tiny desert town between Los Angeles and Las Vegas.

In doing so, it became only the second U.S. network after Tesla Inc.’s to pair EV chargers with a battery large enough to fully operate a big station without constant aid from the electric grid.

The lithium-ion batteries sit in a few white cabinets next to the station in Baker, Calif., a town of 600 people perhaps best known for the World’s Tallest Thermometer, a 12-story structure that tops out at 134 degrees, memorializing the highest temperature ever recorded on Earth in nearby Death Valley.

The 1.5-megawatt energy-storage system is representative of a trend among highway charging stations to manage the voracious energy needs of EVs.

As more EVs travel the highway, remote charging stations are getting more use. At the same time, the chargers themselves are providing ever more voltage to meet Americans’ desire to refill a battery quickly in the same way that gas stations rapidly dispense gasoline.

This combination — a greater number of EVs and more powerful chargers — can cause two problems for the charging station operator. It can result in high demand charges that the electric utility places on big energy users. Or it can exceed the electric grid’s ability to meet the load without expensive upgrades.

Baker is aiming to address the latter problem.

The battery, which sits in the territory of utility Southern California Edison, was chosen “in lieu of relying on additional utility ‘wired’ infrastructure that may not be feasible,” Electrify America said in a Wednesday press release, referring to power lines.

Outside of this one town, Electrify America has the demand-charge problem as well.

Addressing that is the main motivator for other energy-storage projects the company has built in California, the Northeast and the territory of the Tennessee Valley Authority, which serves seven Southern states, said Jigar Shah, Electrify America’s head of energy services, in an email.

The Baker station is designed to deliver at a level of 1.5 megawatts for two full hours. It is backed up by a 66-kilowatt solar array that doubles as a shade canopy for customers.

“To put this into perspective, the energy storage system at Baker, when fully charged, could provide enough energy for an average household for over three months on the single charge,” Shah added in a statement.

Since the commissioning, the company said, the battery and solar array at times have delivered more than a megawatt of power to drivers’ batteries with no input from the electric grid.

Beyond the Baker facility, Electrify America says it has installed about 35 megawatts of storage at more than 150 U.S. stations.

The bulk of those stations are in California. It had turned on 89 battery systems there by the middle of this year, according to a report from Electrify America to California regulators.

About half of those California stations play a secondary role beyond EVs, interacting with the electric grid.

Electrify America said last year that its batteries had participated in 190 demand-response events. Those are incidents when the electric grid is strained and the grid operator puts out a call for users to conserve energy — or, in the case of big-battery hosts, supply some juice.

Tesla has for years been adding storage to some of the stations in its proprietary Supercharger network. Some of those stations are far larger than anything yet attempted by Electrify America.

Electrify America is a network stood up by German automaker Volkswagen AG as a penalty for its Dieselgate scandal in 2015.

In the legal resolution for that scandal, in which Volkswagen was discovered to have cheated on the emission tests of its diesels, California regulators and EPA required Volkswagen to spend $2 billion to build a charging network. Of that, $800 million is dedicated to California.

In June, Electrify America took a step beyond being mere punishment when it raised $450 million to expand operations. The chief investors were the German industrial conglomerate Siemens AG and Volkswagen itself.