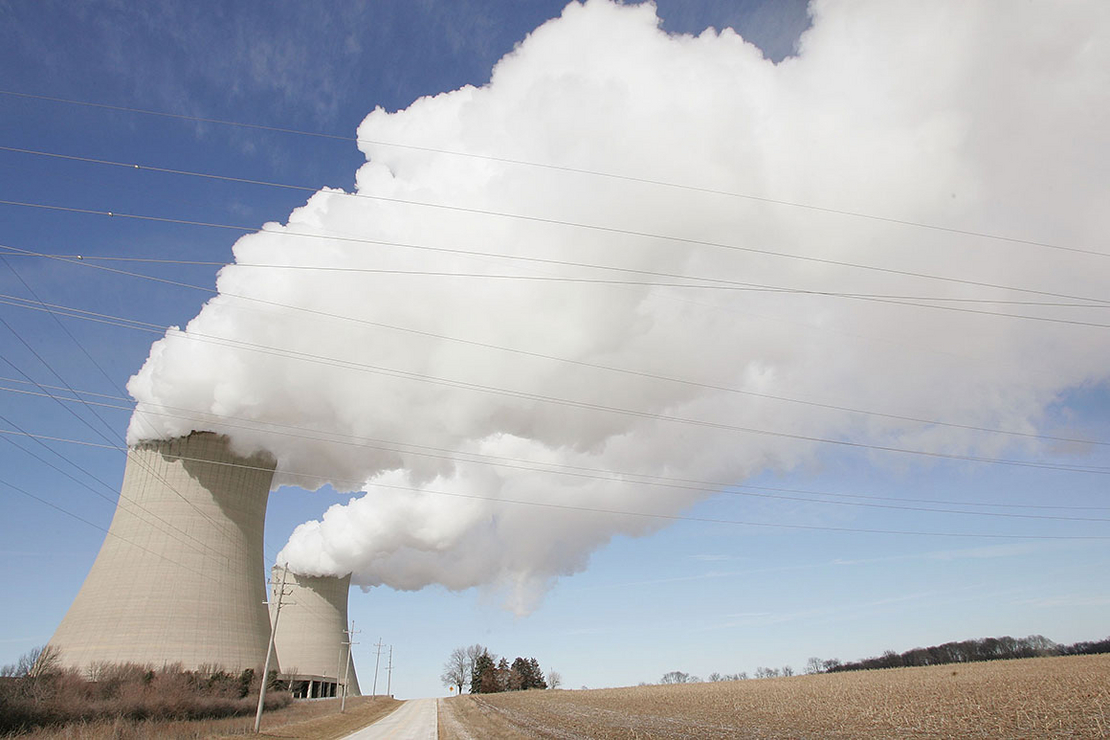 Like other school districts across the country, COVID-19 protocols were front of mind in the Byron Community School District #226 in northern Illinois as classes began last week.

But for district officials, another potential problem looms: the future of the giant nuclear plant a 10-minute drive south.

Exelon Corp.’s 2,300-megawatt Byron Generating Station, a top 10 U.S. nuclear plant, is less than a month from shutting down unless legislators come to the rescue. Depending on who you listen to, the reason is sagging electricity prices or a market failure to adequately value the carbon-free power the twin reactors produce.

The closure would especially hit the local school district, which relies on the plant for more than 70% of its budget. But the economic ripple would extend throughout the county, which shares $400 million of property tax revenue and other economic benefits tied to the facility.

“It will leave a huge hole,” said Byron, Ill., Mayor John Rickard. “You pull that plug in a rural community that only has about 5,000 residents, and that’s a huge hole.”

The threat to Byron comes as Illinois Gov. J.B. Pritzker (D) is striving to put the state on a path to 100% carbon-free energy. Byron is among several nuclear plants to shut down across the U.S. in recent years with more slated for early retirement or at financial risk, even as President Biden has set a goal to eliminate power sector carbon emissions by 2035. From Vermont to California, communities that hosted once-thriving nuclear plants are now being forced to reckon with deep economic cuts caused by their closures.

In northern Illinois, anxiety and worry have been building since Chicago-based Exelon announced plans a year ago to close the plant absent legislative relief, Rickard said. And while the federal infrastructure bill backed by Biden and passed by the Senate this month includes $6 billion in aid for struggling reactors, the financial boost wouldn’t come in time to keep the Illinois plants running (Energywire, Aug. 10).

Exelon CEO Chris Crane said on the company’s quarterly earnings call earlier this month that he’s not willing to delay retirements any longer.

“We don’t want to close these plants, but we cannot make decisions based on hope of legislation being passed in the future,” Crane said. “We’ve been doing that since 2016, while significant losses have been incurred. We must act on the economic facts as they exist today.”

Company officials declined to comment specifically on the current status of legislative negotiations. But local leaders have pushed for months for state legislators to agree on aid for the nuclear plants — something they did this spring after months of contentious debate. Pritzker also signed off on $694 million of ratepayer aid to help the Byron and the nearby Dresden plants stay online for the next five years.

The nuclear provision was a key part of a sweeping energy and climate bill that fizzled in the General Assembly’s final days because of a disagreement over how a phaseout of coal- and natural gas-fired power plants would be handled (Energywire, June 2). The political stalemate lasted through summer, with two key Democratic constituencies — organized labor and environmental groups — unable to come to an agreement.

The deadlock has led Rep. Adam Kinzinger (R-Ill.), whose district includes the Byron and Dresden plants, to petition the White House to intervene by invoking the Defense Production Act or the Federal Power Act to prop up the facilities.

"The decisions you and your administration make on these matters in the days ahead will have a substantial impact on the future of America’s energy and climate policy," he said in a letter Monday to Biden.

Exelon officials have said that only the Illinois General Assembly can act in time to save the Byron and Dresden plants.

While the clock is ticking at Byron, Illinois legislators face another deadline at the end of the month.

According to the Illinois Power Agency, an estimated $317 million to provide solar incentives would be returned to customers if it’s unspent by Aug. 31. The funds represent what’s been collected from customers and committed to helping fund new solar installations, but not yet paid out (Energywire, Dec. 7, 2020).

The solar industry has for more than a year urged lawmakers to pass a bill that would allow funds to roll over for that intended purpose. But the Legislature has so far indicated it will only work with an omnibus energy bill that still hangs in the balance.

With the solar industry on hold and Byron’s twin reactors poised to begin the “coast down” process leading to a permanent shutdown on Sept. 13, parties at the negotiating table are again hopeful they can reach a compromise.

Adding to the momentum: The General Assembly is due to convene in special session Tuesday to consider legislative maps following release of U.S. Census data.

Parties say they could have an energy bill ready to vote on by then.

“Over the last two weeks, I think it’s very safe to say we made way more progress than we had in the previous two months,” said Pat Devaney, secretary-treasurer of the Illinois AFL-CIO. “We’ve been working daily on it and making significant progress at a compromise.”

Jack Darin, director of the Illinois chapter of the Sierra Club, likewise is encouraged.

“I think that there is definitely a renewed sense of urgency around trying to hammer out a bill that can pass before those key nuclear dates, and perhaps even by the end of this month,” Darin said.

For his part, Pritzker, who is seeking a second term and has promised climate action, has been unwavering in insisting that the state must move to cleaner energy.

“Any decarbonization framework must move Illinois aggressively beyond the status quo,” the governor said in a letter to a group of labor organizations earlier this month.

But he, too, sounded optimistic last week. Speaking to a group of climate activists at the Illinois State Fair, Pritzker said: “Folks, we’ve got some work to do, but we’re about 97% of the way there.”

The ramp down and closure of fossil fuel power plants in Illinois has been the key sticking point between the labor unions and the coalition of environmental groups, each of which pushed competing bills this spring.

The proposal being debated would require closing coal plants in the state by 2035, including the Prairie State Energy Campus. The 1,600-MW mine-mouth plant, an hour southeast of St. Louis, began operation less than a decade ago. Its owners — municipal utilities and rural electric cooperatives across the Midwest — have balked at the idea of shutting it down more than a decade before bonds used to finance the $5 billion plant are paid off.

The bill would also require retirement of natural gas-fired power plants by 2045. But it also includes declining greenhouse gas emissions caps that could force fossil plants to ramp down sooner than the statutory deadlines.

That was enough of a concern that the developer of the $1.3 billion Three Rivers combined-cycle gas plant under construction an hour southwest of Chicago threatened to immediately pull the plug on the project — and hundreds of union jobs — if the bill passed as it was drafted.

The plant isn’t set to begin operation until 2023, and developer Competitive Power Ventures Inc. told Crain’s Chicago Business that proposed carbon caps threatened the plant’s viability before the 2045 date when gas plants would be phased out.

Devaney of the Illinois AFL-CIO said the bill would immediately shut down cleaner-burning fossil plants like Three Rivers, costing the state well-paying jobs and leaving Illinois short of generation and buying dirtier power from out of state.

“The difference is the process we use in getting there.”

Another sticking point between labor and environmental groups has been prevailing wage provisions and labor standards, though both sides suggested last week that they’re very near a compromise.

In the Aug. 2 letter to the governor and legislative leadership declaring impasse in talks with labor, the environmental coalition said they had agreed to the unions’ proposed labor standards for 96% of new renewable energy projects.

But environmental groups sought a temporary prevailing wage carve-out for some minority-owned businesses and smaller projects.

For all the optimism that a deal could be struck by the end of the month, Rickard and others in Byron continue to call legislators, write letters and emails as they’ve done for more than a year.

But frustration is growing for the mayor and others, knowing that a political squabble over something that may happen a decade or two from now could lead Exelon to pull the plug on the Byron plant next month.

“That’s happening in three weeks,” Rickard said. “You’ve got a decade and a half to deal with the coal and gas.”