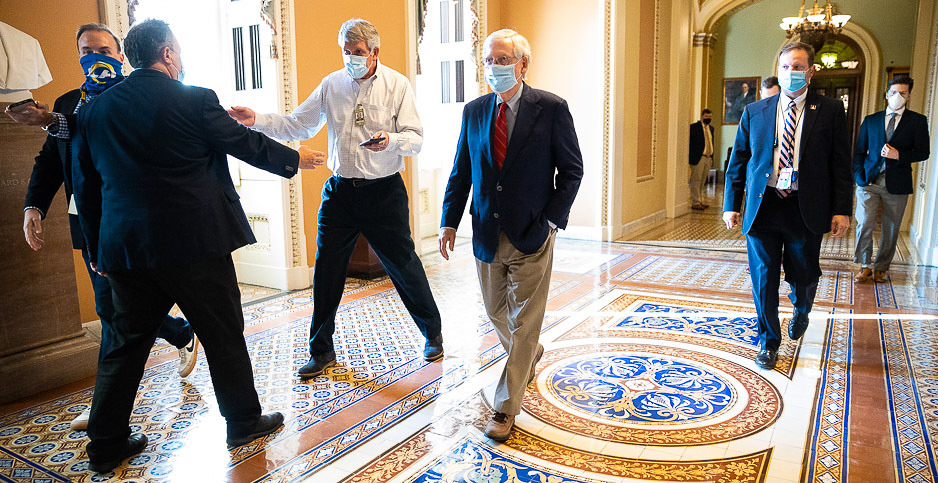 President Trump’s decision yesterday to end COVID-19 relief talks until after the elections is drawing bipartisan criticism on Capitol Hill, including from Senate GOP moderates.

Maine’s Susan Collins and Alaska’s Lisa Murkowski both came out against the move, urging negotiations to resume hours after Trump announced he had ordered talks to stop (E&E News PM, Oct. 6).

Collins, who is facing a tough reelection fight, called Trump’s surprise move to end talks a "huge mistake" while noting that she had already spoken to Treasury Secretary Steven Mnuchin and several of her Senate colleagues.

Murkowski, who chairs the Energy and Natural Resources Committee and the Interior and Environment Appropriations Subcommittee, called for lawmakers to keep at it until a deal is struck.

"Now is not the time for the Congress to stop doing its work," Murkowski said last night in a statement. "Alaskans desperately need relief to help mitigate both the health and economic impacts of COVID-19."

Collins and Murkowski, the sole Republicans to oppose voting on a Supreme Court nominee before the elections, are also at odds with Majority Leader Mitch McConnell (R-Ky.), who spoke to Trump ahead of the president’s announcement.

Trump, according to McConnell, believed talks between Mnuchin and House Speaker Nancy Pelosi (D-Calif.) "were not gonna produce a result, and we need to concentrate on what’s achievable," McConnell told reporters.

The president added, "They just wanted to take care of Democrat failed, high crime, Cities and States. They were never in it to help the workers, and they never will be!"

Trump, however, also retweeted a news article about Federal Reserve Chair Jerome Powell’s speech in which he said more stimulus would help the economy, adding "True!"

Major energy and environmental policy matters were not on the table, despite months of lobbying. Still, issues like water shut-offs and low-income energy assistance have long been in play.

Democrats denounced Trump’s abrupt order that talks were over, which scuttled a planned phone call between Pelosi and Mnuchin.

Trump’s move "is another stark example of him telling the American people: ‘you’re on your own,’" House Majority Leader Steny Hoyer (D-Md.) said in a statement.

Later last night, Trump tweeted: "The House & Senate should IMMEDIATELY Approve 25 Billion Dollars for Airline Payroll Support, & 135 Billion Dollars for Paycheck Protection Program for Small Business. Both of these will be fully paid for with unused funds from the Cares Act. Have this money. I will sign now!"

Rep. Salud Carbajal (D-Calif.) yesterday became the latest lawmaker to announce having COVID-19. Carbajal said he came in contact with Sen. Mike Lee (R-Utah), who was diagnosed in recent days.