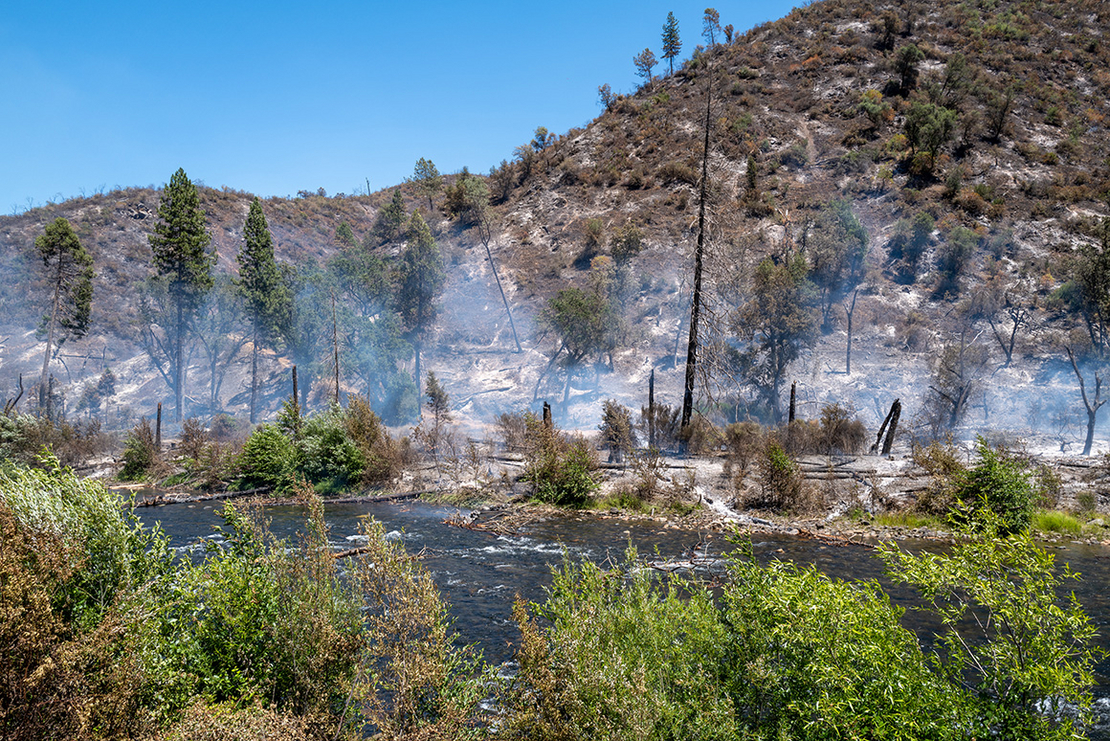 A hillside charred by the Electra Fire in California. The House next week is voting on a broad package of bills to address drought and wildfires. Spencer Platt/Getty Images

A package of 48 bills related to wildfire, forest management and drought will reach House floor in one giant measure next week as Democrats try to push through their version of how best to tackle the climate crisis on public lands.

The bill, called the “Wildfire Response and Drought Resiliency Act,” H.R. 5118, would boost pay and benefits for wildland firefighters, help the Forest Service fill gaps in fire management staff and promote bigger forest management projects to reduce hazardous fuels — but without the exceptions from long environmental reviews that congressional Republicans say are necessary to make a difference.

The Rules Committee takes up the bill tomorrow, setting the parameters for floor debate and determining which amendments may be considered.

Provisions in the bill are wide-ranging and touch on issues promoted by both Democrats and Republicans, albeit short of the more aggressive land management approaches Western GOP lawmakers have urged.

Those provisions address a wide gap between the pay federal wildfire crews receive and what their counterparts in state agencies such as the California Department of Forestry and Fire Protection see and which the Biden administration has tried to address administratively — to a point (Greenwire, June 21).

Forest management projects — mainly reducing hazardous fuels such as dead trees — are part of the bill, which would authorize $500 million annually for that purpose. The Department of Agriculture would select up to 20 large, landscape-scale restoration projects over five years.

But the bill also spells out that projects must adhere to NEPA reviews, be limited in scope and preserve mature and old-growth forests, as well as those that fall under roadless-area protections.

In addition to the wildfire and forest provisions, the bill would adopt dozens of measures aimed at the 22-year drought that has shrunk major river basins across the western United States, threatening water for agriculture and municipal users alike.

Among the measures, the act would authorize up to $500 million to the Interior Department through fiscal 2026 to prevent Lake Powell and Lake Mead from “declining to critical low water elevations.”

That amount exceeds the $300 million Interior previously received for voluntary reductions and increased conservation on the Colorado River in the bipartisan infrastructure deal.

That includes H.R. 7792, the “Water Data Act,” which would create a multi-agency initiative to track and standardize information on streamflows, precipitation, groundwater, soil moisture, snow, evaporation, water quality and water use by various sectors.

It would also establish a “National Water Data Framework” to “harmonize and align policies, programs, protocols, budgets, and funding programs.”

“Water is life and communities across New Mexico and the West are facing the effects of a millennial drought and unprecedented wildfires,” Rep. Melanie Stansbury (D-N.M.), the bill’s sponsor, said in a statement to E&E News. “This package marks a historic moment in water management as we work to adapt to the effects of climate change.”

The package likewise includes the Aquabus’ H.R. 7793, the “Rio Grande Water Security Act,” which aims to create an integrated water resource management plan for the West’s third-largest river. That bill would also address funding for 18 New Mexico Pueblos along the Rio Grande whose water infrastructure is in significant need of upgrades.

The drought package also incorporates H.R. 6238, Stansbury’s “WaterSMART Access for Tribes Act,” which aims to ease the ability of tribal nations to participate in the conservation program by waive or reducing cost-sharing requirements.

“This trio of bills will help Tribal communities unlock critical funding for water conservation and security, improve water management across the Rio Grande Basin, and revolutionize our Water Data systems. This legislation will provide tools to help our communities tackle our biggest water challenges for generations to come and I’m proud to have them included in this package,” Stansbury said.

The measure would authorize $700 million to a competitive grant program for water recycling and remove a five-year sunset in the current program to allow for longer-term projects.

“Combating our drought is going to take every tool in our toolbox, and large-scale water recycling is an innovative way to conserve water as we face the worst drought in 12 centuries,” Lee said.

A survey published in Nature Climate Change earlier this year showed that the current two-decade drought is the driest period since around the year 800. A subsequent Bureau of Reclamation analysis found the only drier period occurred in the second century (Greenwire, June 9).