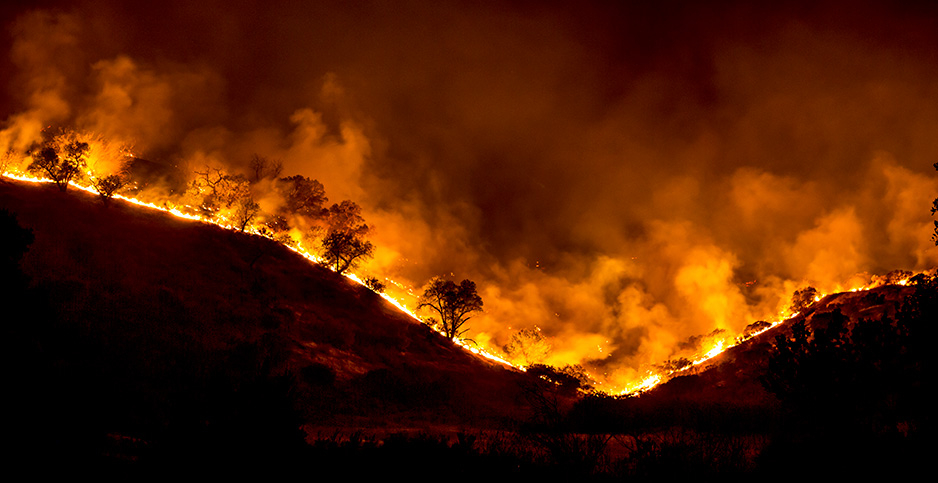 Scientists say a decadeslong drought in the western United States is being caused in part by climate change. The Woolsey Fire of 2018 is pictured in California. Peter Buschmann/Forest Service/Flickr

A "megadrought" gripping the western United States is the worst one in 500 years, scientists say. And it’s the first to be influenced by human-caused climate change.

A study published this week in the journal Science investigates the occurrence of megadroughts in western North America over the last 1,200 years. While a megadrought has no strict scientific definition, most studies classify them as severe droughts typically lasting a couple of decades at least — longer than any drought event that occurred during the 20th century.

Led by Park Williams of Columbia University, the researchers relied heavily on historical data derived from analyses of tree rings. Tree rings can provide a variety of information on past climate conditions.

According to the tree ring data, which extend back to A.D. 800, there have been a handful of extreme megadroughts over the last 1,200 years.

The most recent one is happening right now. It’s gripping a wide swath of the southwestern United States and northern Mexico, and it’s been ongoing since around 2000.

"We now have enough observations of current drought and tree-ring records of past drought to say that we’re on the same trajectory as the worst prehistoric droughts," said Williams in a statement.

The severity of the current megadrought is second only to the last event, which occurred in the late 1500s, the research say. It also seems to be happening for different reasons.

Past megadroughts were triggered by natural fluctuations in the Earth’s climate. Temporary shifts in the temperature of the Pacific Ocean, for instance, can have a strong influence on climate in the southwestern United States.

These kinds of natural variations are also playing a part in the current drought. But they’re not the only factors. Human-caused climate change is a strong driver, as well, the study concludes.

The researchers used a suite of climate models to investigate the influence of anthropogenic warming on the present-day situation. The models suggest that the warmer and drier conditions brought by climate change account for nearly half the severity of the current drought.

Since the preindustrial era, temperatures in the western United States have risen by just over a degree Celsius, or around 2 degrees Fahrenheit.

Past and future of droughts

The study is an "ominous reminder" that previous droughts in western North America have been just as severe and even longer than the current event — with only natural climate cycles to blame, the authors write.

And this isn’t the only study to make that point.

Prior research looking thousands of years into the past, published in Scientific Reports, has suggested that some previous dry periods in the western United States have lasted for hundreds of years at a time.

"The southwestern megadroughts of the medieval era caused fierce wildfires, ecosystem changes, and subsistence crises among ancient societies," wrote David Stahle, a paleoclimate expert at the University of Arkansas, in a commentary on the new research published this week in Science.

All of this begs the question of what to expect as human-caused climate change becomes an even bigger factor in the future.

Other studies have highlighted the threat of megadroughts in a warmer world. One 2015 paper warned that drought risk in the latter half of this century could rival the extended dry periods that occurred during the Middle Ages.

As this week’s study would suggest, that point seems to have already arrived.

But projections do suggest that the risk of these kinds of events may increase as time goes on — especially during times when natural swings in the climate compound with the effects of human-caused climate change.

How strongly the risk will change, and how severe these future droughts may be, will likely depend on the level of future greenhouse gas emissions. But in the meantime, the research documents that the point at which climate change becomes a contributor has already arrived.

As Stahle notes, the new study "add[s] anthropogenic forcing to the list of factors capable of transforming a garden-variety dry spell into a full-blown multiyear megadrought."